This article has taken 6 or more weeks to pull together (in between other points of focus) … we started on it a bit before the official commencement of summer 2020-21  … and during that time it’s like we’ve seen two different seasons alternate:

Given a few other developments in the NEM, it seemed useful to post this article (albeit a few weeks later than initially envisaged).

(B)  Recapping the effects of high temperatures

Let’s start by recapping some of the effects of high temperature on the electricity grid, and hence the National Electricity Market:

Some quick notes about three developments we’ve spotted in the last couple weeks, and think that our readers should be aware of;

Beginning late in November, AEMO started sending out a different form of high temperature alert via its Market Notices system:

The AEMO has prepared this page on their website that provides an explanation of how the process works now … and gives some clues as to why we are seeing more of these this summer than we did in prior summers.

As an example, I’ve copied in Market Notice 801598, which was published earlier today:

1. review the weather forecast in the local area where their generating units / MNSP converter stations are located and,

2. if required, update the available capacity in their dispatch offers or availability submissions consistent with the forecast temperatures.

Further information is available at:

The key point is that the AEMO has now selected 16 different BOM measurement points that are, they believe, representative of a localised temperature that would cause high-temperature affects at different groups of generation plant.

(C1b)  What they have changed from … and why

In prior summers, high temperature alerts tended to focus on the forecast temperature at a BOM reference station close to the Regional Reference Node inside the region (which correlated with capital city, for most regions), plus another for the northern end of Basslink.

Through the work we’ve done (in collaboration with Jonathon Dyson’s GVSC team) in publication of the Generator Report Card 2018, and then the follow-on Generator Statistical Digest 2019, we have helped to sharpen the focus of the effect of extreme temperatures on generation plant … and particularly the increasing role of high temperature local to the particular generation asset (which are becoming increasingly geographically dispersed, as also discussed in the GRC2018).

In the GSD2019, we extended our analysis by providing a discrete ‘Temperature Effect Chart’ on the ‘B’ Pages for every single DUID operational in the NEM at some point in 2019.  This used a ‘closest to’ match for reliable BOM measurement point … and is something that will be repeated for the (larger set of) DUIDs operational in 2020 in the up-coming GSD2020.

1)  On the second of these sessions (Monday 7th December 2020), Marcelle was asked to speak, to provide this guest perspective:

1st Snippet =  on Monday 7th December asking ‘Do you know your obligations as a Semi-Scheduled Generator?’

2nd Snippet = on Tuesday 8th December this short refresher on the difference between Compliance (the AER’s domain) and Conformance (an AEMO process).  Both of these are important.

3rd Snippet = on Wednesday 9th December ‘How does a wind or solar farm make money?’

4th Snippet = On Thursday 10th December, ‘PPAs aren’t as easy as they used to be!’

These followed from the sessions Marcelle and Jonathon Dyson had conducted for the Clean Energy Council during the year:

(b)  Second session for Wind Farm operators on 17th September 2020.

2)  Earlier in the session on Monday 7th December 2020, the AEMO spoke about this change … and helpfully presented this slide that spoke about the the move from 5 reference temperatures to those representing 16 zones: 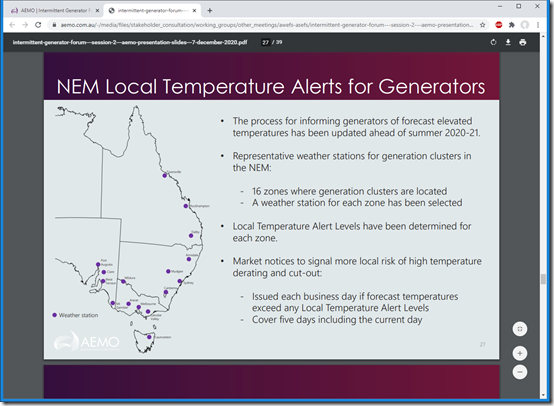 Based on our number crunching (noted above) it’s clear that moving from 5 to 16 reference points will deliver a much better view … but still would not be perfectly accurate.  However we also understand the need to make the Market Notices (and Local Temperature Alerts in more general terms) intelligible and not overly noisy, so that a compromise approach needed to be made.

I would think that many generators would also be watching the more localised temperatures more closely in future, in order to ensure that they continue to keep the AEMO informed of possible high temperature effects onsite.  We will certainly review with interest the historical results we assemble as part of the GSD2020.

(C1c)  Alerts that have been published in November and December 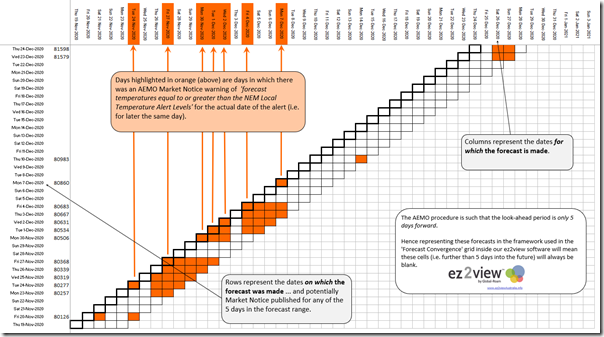 Note that these cells were coloured when an alert was issued by AEMO for any of the 16 x zones now used for temperature alerts, so the data concept is actually over 16 layers.

The most common alerts appear to be (thus far):

1)  for Dalby in southern QLD (nearby to the Darling Downs CCGT and Darling Downs Solar Farm, to Oakey GT and the Oakey 1 Solar Farm and Oakey 2 solar farm, and even presumably representative of  Kogan Creek and Millmerran coal-fired plant, down closer to the border).

It’s not AEMO who says this, but my interpretation … however I believe wasn’t just coincidence that the AEMO hosted a forum for stakeholders involved in Intermittent Generation assets over two consecutive Mondays leading into summer 2020-21 on the

At least in part, the reason for this direct approach can be read into the remarkable Market Notice 72015 published on 23rd December 2019 in which AEMO spoke directly to some operators of Wind Farms and Solar Farms:

(a)  in some cases, unaware of some of their requirements as a registered generator;

(b)  or, in other cases, did not understand enough to navigate the AEMO’s various systems (covering both Bidding and AWEFS/ASEFS); or

(c)  were not aware of high-temperature limitations of their own machines.

(2)  But which, as a result, resulted in the broader market being ‘caught with its pants down’ when a sizeable amount of wind generation that AEMO had been counting on its forecasts did not eventuate at real time … because the of ‘High Temperature Cut-Out’ at a number of different wind farms that AEMO had not been alerted about.  This was discussed in this WattClarity article on the following day: 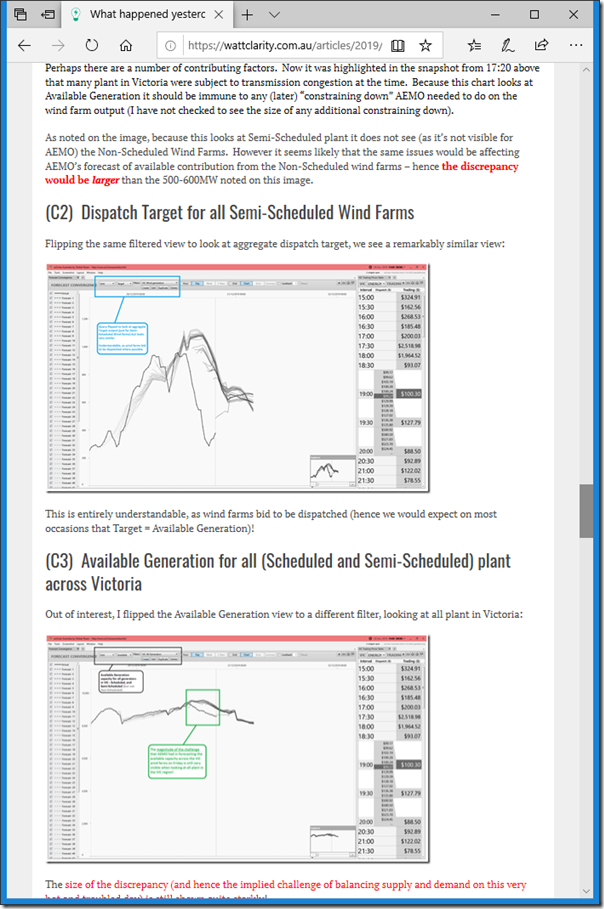 … after the end of the quarter, it also was discussed in the AEMO’s QED at the time… and then in other places.

Coincidentally also in the same week of that 2nd AEMO session (on Tuesday 8th December) we received an email from the AER about their ‘NEM Summer Readiness compliance bulletin and checklist’ which I read as a parallel attempt to ensure that all generators (but perhaps the new entrant Semi-Scheduled ones in particular) understand their Compliance obligations.

This news alert contained links to the following two documents: 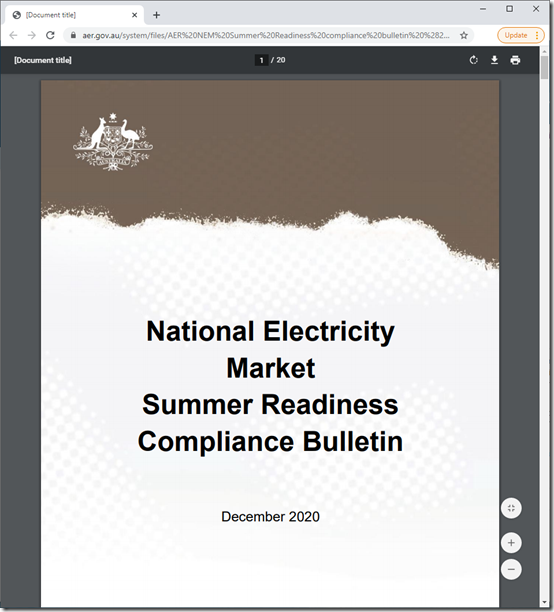 There’s also this 2-page Summer Readiness Compliance Checklist (which is dated December 2019, which I presume is still current because nothing has changed from the AER’s perspective): 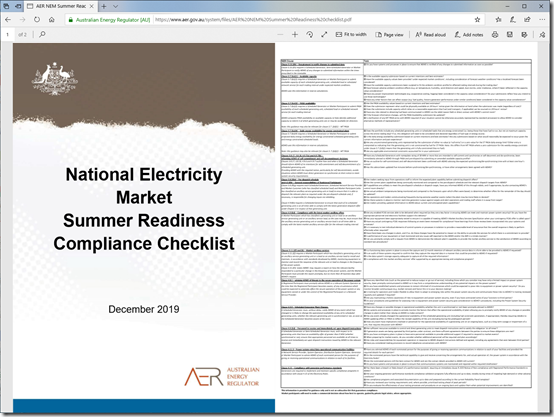 I also noticed in the same week that the AEC and the ENA together jointly released this Fact Sheet ‘Heatwaves and electricity supply’.

(D)  How we have explored high temperature effects

As alluded to above, we’ve covered high-temperature effects on generation plant in a number of ways, including the following;

In the Generator Report Card 2018 (the first such edition in a growing series) we explored high-temperature effects using nearest BOM temperature records and matching them to normalised Capacity Factor (using registered capacity) across the years 2016, 2017 and 2018 in aggregate.

This analysis was presented for most fuel types within the Fuel Type Aggregation section of Part 4 within the 180-page analytical component of the GRC2018.   It showed some results that would be surprising to a number of readers … and led to further questions that we sought to address in what came next.

We took some of the learnings from the GRC2018 in informing the way in which we prepared the Generator Statistical Digest 2019, and particularly focused on high-temperature effects on every single DUID (all fuel types, and also Scheduled Loads).

Some results for individual units (understanding there were more than 300 in total) have been presented in discrete articles on WattClarity since the release of the GSD2019 in late January 2020.

As noted above, we’re repeating the process of the GSD2019 and will release the Generator Statistical Digest 2020 on or around Wednesday 27th January 2021.   Copying from the GSD2019, this will have a particular focus (with data for CAL 2020) … and we’ll be kicking off the data crunching exercise in our ‘BEAST’ database engine on Friday 1st January 2021 (rapidly approaching).

For a few more weeks (until release) you can still save $300 exGST on the final release price if you pre-order the GSD2020 now prior to the date of release.

A big thanks to the growing number of people (new and old) who have provided us with their pre-orders already.

We’ve not yet committed to making a Generator Report Card 2020 but, if we did, we would be sure to drill in even deeper (possibly with reference to the AEMO’s chosen 16 different measurement locations).