Semi-scheduled generation (large-scale wind and solar) is “intermittent” by nature. Its energy availability is variable and is forecast for the dispatch, pre-dispatch and PASA processes in the NEM. Critical to an effective energy availability forecast is accurate provision of plant availability information – as first you need to know any limitations on the equipment before you can consider the wind or solar conditions. Earlier this year I wrote an article which includes some background on the relevant terminology and the forecasting processes.

Forecasting energy availability is a complex task, including getting the right information to be able to make the best forecasts, which requires co-operation between AEMO and the wind and solar farm operators. AEMO is keeping the industry informed via forums – most recently on November 30 and December 7. There’s a link to all the forum presentations on AEMO’s website. Some of the commentary in this article is responding to questions asked by AEMO at the November 30 forum.

So, what does the market need from a forecasting system, and in particular from wind and solar farm operators? First is that the plant availability information be consistent and reliable. Then, a basic requirement common to many aspects of the NEM is for transparency and traceability of this information. At Global-Roam (the owners of the WattClarity blog) we like to get right into the data to understand why things happened and to identify emerging patterns. If the data’s not there we can’t do that! In the longer term, detailed information on plant availability will help the market understand the long-term performance of wind and solar, to improve forward planning and investment decision making.

How to get consistently reliable information?

The best way to get the right answer to a question is to make sure that everyone knows what the question is and how to answer it. Participants need to know what to put where and when, including in more challenging situations.

The dispatch and short-term forward (pre-dispatch/ST-PASA) timeframes are managed very differently in AWEFS and ASEFS, which causes some confusion among participants.

In recent years there has been a lot of confusion among participants about how the dispatch and forward (PD/ST-PASA) forecasts are calculated and where they need to put the plant availability information. The AWEFS/ASEFS system is how it is for historical reasons, but perhaps there’s a way to unify these. I’ll come back to that in a minute. In short, this is how it works now: the dispatch forecast is based on SCADA information (element availability, wind/solar measurements, active power, local limit) or a self-forecast, and the forward (PD/ST-PASA) forecasts take plant availability information from the Intermittent Generation portal (elements unavailable, upper MW limit).

An aside: for the PD/ST-PASA information it’s good to see AEMO is working on useability improvements to the intermittent generation portal. This system is currently very tedious to use which limits how frequently a participant can update the data. In the interim, participants may like to explore the use of spreadsheets (which can be uploaded to the portal) to create their forward availability submissions. Have a look at page 23 of the Guide to Intermittent Generation. An additional improvement would be to remove the need for participants to enter data in the pre-production as well as production portals during commissioning while the AWEFS/ASEFS forecast model is being prepared, so that data does not need to be entered twice in a clunky system at the time when updates are most frequently needed.

In simple situations, the automatic SCADA (real-time data feed, configured at commissioning) provides the correct data for the dispatch forecast. Alternatively, a self-forecast can be provided by the participant – another whole topic of its own! The participant then (generally manually) updates the Intermittent Generation portal with planned maintenance and unplanned outages of turbines or solar inverters, and limits to the whole site such as planned substation outages, transformer issues or reactive power equipment limitations to the active power.

For more complex situations it’s not so easy for the participant to get the information right. Some of these complex situations include extreme weather conditions (high wind, high temperatures, and smoke), distribution network limits and runbacks not modelled by AEMO, and the recent inverter-limit constraints.

I commented on the impact of extreme weather on forecasting in an article following the previous AEMO intermittent generation forum. AEMO discussed these issues again in the late-2020 forum, making it clear that AEMO sees it as the participant’s responsibility to update its plant availability during extreme weather as the participant is better placed to know the effects on their plant. Many participants will need to develop complex internal processes and tools to meet this expectation, but I don’t think it’s currently clear to participants what’s expected of them, nor how to best enter the information. While AEMO has offered to talk through the particular complexities with each participant individually (contact the Operational Forecasting team), it would be valuable for AEMO to publish specific examples of extreme weather with their expectation for participant submissions, particularly in how the information would look in the SCADA and the intermittent generation portal. It’s not productive to have participants trying to reverse-engineer what AWEFS/ASEFS will do in each situation, and there are some situations where the elements available / plant limit model doesn’t seem to fit. The particular situations of interest are high-wind (affecting wind farms), high-temperature effects (affecting wind through turbine cut-out and de-rating, and solar through a reduction in efficiency and inverter cut-out), and smoke effects (affecting solar). There are many other complexities including wind sector management, where the operator shuts down some turbines to improve the overall outcome in certain wind conditions.

When the impact on the site is either a limit to total output (e.g. the transformer total output is reduced), or a number of turbines/inverters are anticipated to shut down, this is straightforward to enter. It’s more complex to accurately convey a de-rating effect or a reduction in efficiency, where some parameters of the situation that don’t neatly fit the elements available / plant limit model need to be shoehorned in.

AEMO has recently resolved a legal question about whether distribution network limits that aren’t modelled by AEMO can be included in the AWEFS/ASEFS forecasts (I believe this concerned NER 3.7B(c)(6)), which now gives clarity to AEMO and participants that distribution limits can explicitly be included in the availability information provided, a big step forward. There remains some complexity for participants in knowing which limits are modelled by AEMO and which aren’t, and if the limit isn’t a simple MW level then it’s difficult for participants to forecast this in their Intermittent Generation portal submissions. Runback schemes can also be quite complex. If it’s difficult (or impossible) for the participant to forecast what the distribution limit or runback might do then there could be inaccuracy in the PD/ST-PASA forecasts, which could be a problem in the aggregate if multiple sites have similar limitations.

In the last year or so some new constraint formulations have popped up from AEMO with limits on the number of inverters at a site that can be in service in certain conditions. These constraints affect the system not by binding as a typical constraint would, but by driving the operator to switch the inverters off (making them appear physically unavailable) when the constraint is invoked. This is fine in dispatch for AWEFS/ASEFS as the elements available SCADA count reflects what’s available at the time. In PD/STPASA this appears to be more complex. Is the participant expected to anticipate when the constraints will be invoked and correspondingly reduce the inverter count in the Intermittent Generation portal for PD/STPASA to prevent AWEFS/ASEFS from over-estimating the energy availability? One way to manage this could be to have a PD/ST-PASA version of the constraint that was a MW limit instead of an inverter count, but this would only be correct at maximum wind/solar conditions. There are often many sites affected by similar constraints at the same time so this could add up to a big offset in the forward forecasts if not handled well. 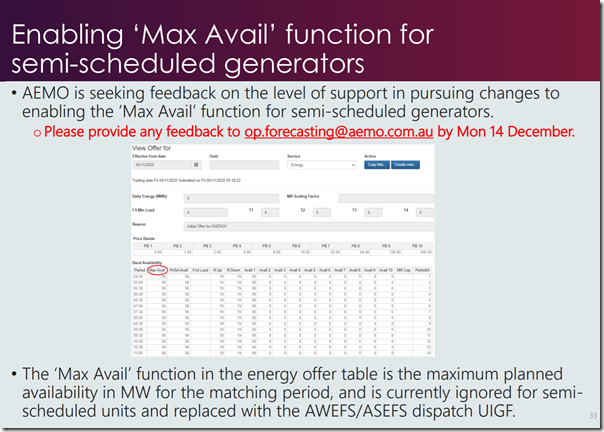 There are several good reasons why this should be done, at least in dispatch (I’ll look later at other timescales):

The idea of entering a profile for MAXAVAIL across a day raises another question – what effect would the MAXAVAIL field have in the pre-dispatch and ST-PASA timeframes?  Consistency of the NEMDE calculations would suggest the MAXAVAIL be applied as a limit in PD and ST-PASA as well, which begs the question of what the Upper MW Limit field in the Intermittent Generation portal would then be for.

Perhaps there’s a different way. What if the bid file had an extra column for “elements available”, and the Intermittent Generation portal (the system where currently the PD and ST-PASA timeframe plant availability is entered) was taken out of the process? The SCADA values could still be incorporated in real-time.

There would be several benefits from such an approach:

Why is transparency of information (and the related traceability, knowing where a value came from) important?

In the short to medium term, transparency of information used to prepare energy availability forecasts allows participants to see what other participants are doing (increasing understanding and motivating compliance, and increasing market efficiency), and allows external analysis (such as in the Generator Statistical Digest and Generator Report Card) to assess behaviour, compare performance between generators, and identify emerging patterns.

AEMO has announced that it will be publishing next-day the PD/ST-PASA plant availability submissions from May 2021. Here at Global-Roam we’ll be taking a close look at this data, as we expect it’ll greatly improve our analysis of events where generation dropped away or rose unexpectedly. In the MT-PASA timeframe a recent rule change means for scheduled units that their plant availability is public 3 years out (ending the efforts of many to reverse-engineer the aggregated data), but unfortunately semi-scheduled were omitted.

Traceability is also important to ensure the information is understood, such as when there are multiple factors involved that may mask each other. A great example of this is in the publication of the dispatch self-forecast data, where AEMO publishes next-day the AWEFS/ASEFS forecast, all of the self-forecasts submitted, and which forecast was used in NEMDE and why.

At the recent Intermittent Generator forum AEMO sought feedback on the publication of actual plant availability from SCADA. 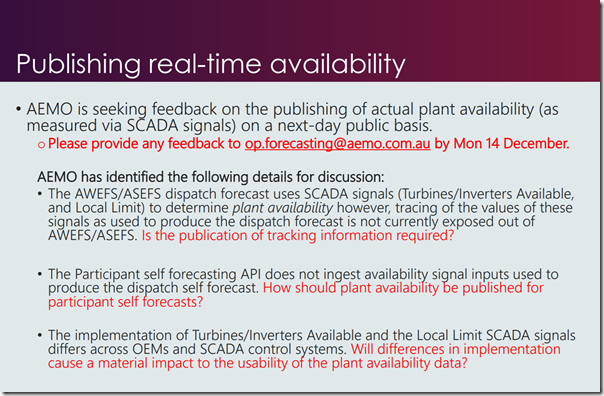 In response to AEMO’s questions:

Questions prompted by that chart from the ‘Renewable Integration Study’

Patricia Boyce examines a chart that was included in the AEMO’s Renewable Integration Study, which depicted actual and modelled solar and wind generation output against underlying demand. She then looks at whether intermittent generators can achieve sufficient return and discusses the problems that still need to be solved.

Do you know your obligations as a Semi-Scheduled Generator?

This is the first of a short series of video snippets extracted from the 17th September 2020 presentation by Marcelle Gannon and Jonathon Dyson for the Clean Energy Council entitled ‘Maximising Profitability in the NEM’ for Wind Farms.