No time to post anything other than this snapshot from NEMwatch v10  (our entry-level market dashboard) highlighting that the VIC demand (measured by ‘TOTAL DEMAND’ in this case) dropped down as low as 2,259MW in the 12:50 dispatch interval on Christmas Day: 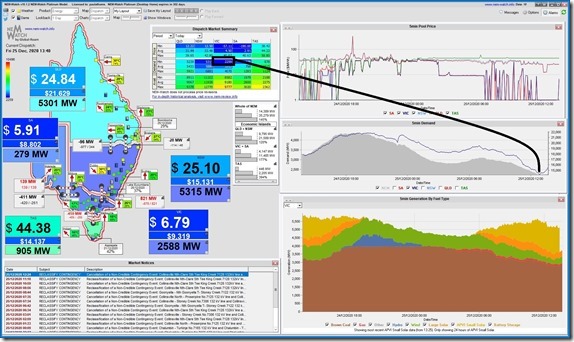 Separately, AEMO data shows the Operational Demand dropping as low as 2,529MW in the half-hour ending 13:00 (NEM time).  With reference to this article from 29th August 2020 about a prior ‘lowest ever’ point for VIC demand we can see how the Grid Demand continues to fall further south.

The NEMwatch Fuel Mix chart highlights how rooftop PV was performing strongly, and (by virtue of this, and the low level of ‘Underlying Demand’) causing the VIC brown coal units to reduce load in the middle of the day.

In March 2008 (after summer had officially ended) South Australians were forced to endure a record 15 straight days of temperatures climbing above 35ºC. Victorians also experienced extreme heat for…