Note, with respect to this article (and others on WattClarity) that all times are in ‘NEM Time’.

Last week experienced price volatility over several days in the week in the NSW region of the National Electricity Market:

2)  There was a single price excursion in the 12:50 dispatch interval on Tuesday 15th,

(a)  It was a day when Reserve Trader was triggered … certainly a surprise to me!

(b)  One of the contributing factors on Thursday was the ‘transformer issue’ at Liddell unit 3 which seriously injured a person, and brought the unit down for a long-term outage.

Some of these spikes (but not the largest) also coincided with a jump in QLD prices.  These events generated a degree of interest in the mainstream media, and commentary online.  It also triggered some questions for me – so,  I’ve taken a quick look.

(A)  A reminder about complex systems

Let’s start with a reminder that, in a complex system like the National Electricity Market, it’s quite rare that there is a single ‘cause’ to any outcome … such as with the ‘why did we see price volatility last week in NSW?’ question we’ve been asked (and asked ourselves).

Others, perhaps a bit more pointedly, phrase the question in terms of a more inflammatory ‘who can I blame for what happened?’ … and it does not surprise us that these people tend to gravitate to the extreme ends of the Emotion-o-meter.  That’s not really where we sit.

I’m posting two separate articles today to address (separately) two of the apparent factors … but keep in mind that there were at least five, in no particular order:

Readers should note that there are almost certainly more than 5 contributing factors.  I listed (just) 5 in order to illustrate that there’s clearly more than just a single factor.

(B)  Drop in Wind and Large Solar in NSW

For Wednesday’s article, I included a chart trending aggregate production (and energy-constrained availability) across all Wind and Large Solar plant in NSW through until the Wednesday afternoon price spike.  Because Thursday was the more critical period (a longer period of volatility, and because Reserve Trader was triggered) I have included an updated view here (your copy of the original query is here, for those who are licensed to NEMreview): 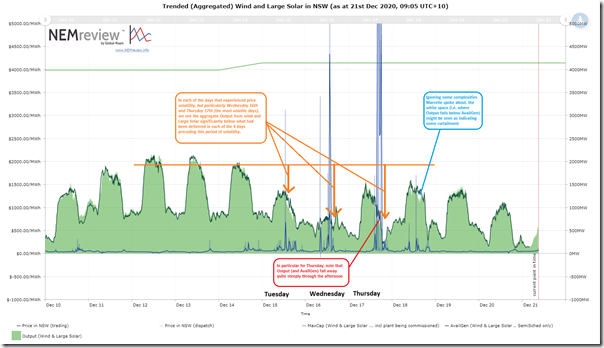 There’s always a problem in calculating numerical comparisons – because of the need to establish a ‘compared to what’ baseline.

In the chart above we can see that aggregate output was fairly strong and consistent across each of Friday 11th, Saturday 12th, Sunday 13th and Monday 14th.  As illustrated on the image, compared to that type of output level, we see:

1)  On Tuesday 15th, aggregate production from Wind and Large Solar was at least 500MW lower (i.e. equivalent to the loss of a sizeable coal unit);

3)  On Thursday 17th December, aggregate production was better than the day before, but still well off the peak:

(a)  it was at least 1,000MW below by the time of the last period of price volatility;

(b)  as noted on the chart, on this day it’s noted that the output fell away quite sharply through the afternoon … which unfortunately coincided with when Reserve Trader was being triggered;

4)  On Friday 18th December output had recovered somewhat, though still not up to the peak of the prior weekend.  This would be one factor leading to reduced volatility on Friday, with only a single spike up above $1,500/MWh.