With our intended Monday 6th December release date* for GenInsights21 now just over 6 weeks away, this weekend is another one in which I’ve been continuing the process of pulling together as much as possible** of the seemingly endless items of analysis we’ve identified for possible inclusion in this update to the very well received*** GRC2018.

* don’t forget that you’re also able to submit your pre-order for GenInsights21 now, in order to have first access to the report when it is released and save on what the cost will be at the time of release (only valid until the time of release).

**  over the ~30 months that have passed since we release the GRC2018 we have continued collating ideas for additional areas worthy of analysis (or delving even deeper than what we did in the GRC2018).  We have done this understanding that we’d never get through the full list … but we’re progressing through the list as best as we have been able in this start-stop-start process through the whole of 2021.

However, even with my head in detailed analysis, I’ve been keeping half an eye on what’s been happening in the NEM this weekend via our ez2view market dashboard.

In particular, I’ve been running a pre-release copy of ez2view version 9.3 – which is the version we’ll be releasing to our clients shortly in line with today’s commencement of the Wholesale Demand Response Mechanism (WDRM) … though perhaps it might be more easily understood as a Centralised Negawatt Dispatch Mechanism.

(A)  A flurry of activity

The launch for the industry has seemed to be very much at the ‘soft launch’ end of the spectrum – especially when compared with the much more significant commencement of Five Minute Settlement (only 23 days ago).

About a week ago (only) we have only just seen MMS v5.1 go into Production* – and only on Friday (i.e. 2 days ago) we saw the AER release its Final Decision on WDRM Participation Guidelines (not to be confused with the AEMO’s own WDRM Guidelines … unfortunately similarly named!)

* With respect to the MMS v5.1 our copies of ‘MMS Public’ have been upgraded already.  Early in this new week we will be upgrading those copies of ‘MMS Private’ we maintain on behalf of various Registered Participants.

I read somewhere (can’t find it now) that there’s only a single Participant registered to provide Negawatts in the ENERGY market (remembering that Negawatts have been enabled for some FCAS commodities for a number of years).

1)  No surprise, given that they have been strongly advocating for a centralised negawatt dispatch mechanism for years, that it was Enel-X (i.e. the old ENERNOC and even older Energy Response).

2)  We know of a number of others who have processes in the pipeline and would guess they will be active by summer 2021-22.

Given the very tight timetable (hot on the heels of 5MS) we have made the choice not to release upgrades to our ez2view (and other) software before the commencement of WDRM – but rather to observe for a bit in order to confirm what we should be doing with each piece of software … i.e. when we can actually observe behaviour for a bit.

1)  Part of the reason for this has revolved around dealing with the inherent challenges and contradictions of the Invisible Man (the Villain #8c permutation).

2)  But there’s an added complication of Tripwire #3 being created as a result of some implementation choices having been made by industry (given the tight deadline for implementation following on from the massive workload of 5MS) that we want to ensure we have successfully circumvented in how we’ve upgraded ez2view.

It’s only Sunday so there is very limited data available in real time (will see more tomorrow) but readers might like to have this early peek at some of the widgets that have been upgraded in ez2view for the WDRM: 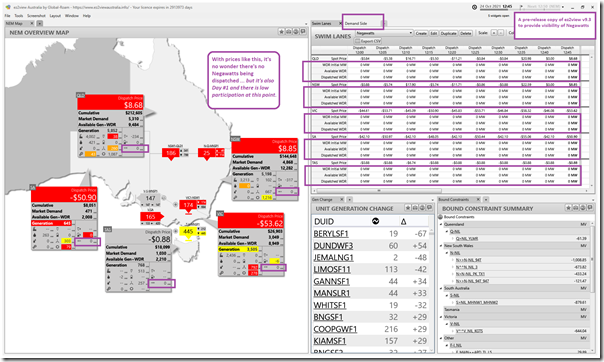 Leaving aside the inherent oxymoron of ‘making the invisible man more visible’ we see that, based on the data the AEMO is currently publishing for early afternoon Sunday, there are zero negawatts currently being used in the dispatch process.

Little wonder, given where prices are at currently!

In the interests of full disclosure, I’ve raised concerns about proceeding down this path in prior articles – as it’s not going to be sustainable or scalable in the coming years.  Some articles raising these concerns include:

1)  On 5th March 2019 I wrote about ’Some thoughts about Demand Response, in parallel with AEMC deliberations’ at the commencement of the AEMC’s processes.

2)  On Monday 21st October 2019 I followed that up with ‘All aboard the Negawatt Express … but where are we really headed?’ following the AEMC’s draft determination.

3)  On 5th May 2020 some concerns were also raised when discussing ‘Balancing Supply and Demand …. in the fast approaching ‘NEM 2.0’ world’ about some broader challenges of the energy transition using data from GSD2019 (analysis which we’re incidentally looking to update for GenInsights21 … it’s one of those things on our very long list!)

4)  On 10th June 2020 I posted about ‘The rise of the ‘Negawatt Factory’?’ in conjunction with the AEMC’s Final Determination.

5)  On 24th November 2020 with the rise of negative prices I posted about ‘Making demand response work with negative prices’ – because the way the WDRM works, it won’t do anything to help with that rapidly growing issue.

1)  No doubt there will be articles posted on WattClarity in future.

2)  Perhaps there might be some early insights shared about WDRM in GenInsights21 (but that is nowhere near the top of the list … collating and sharing early insights on 5MS is much more important).

Readers might also be interested in the articles Linton Corbet has written on the introduction of the WDRM as well – including:

3)  On 31st March 2021, Linton also published  ‘Will your 10 our of 10 baseline be eligible’ with respect to the AEMO’s draft Baseline Eligibility Compliance and Metrics Policy.

That’s all for now…

On Wednesday afternoon some high prices forecast for South Australia from Thursday morning prompted a question from a Large Energy User client.

Windy conditions persist – and bring with them their own challenges for the AEMO in managing the security of the system
(PS wind contributes to, but there are other factors discussed in the post)