On 21st January 2021 we received an email from AEMO that we thought worth sharing: 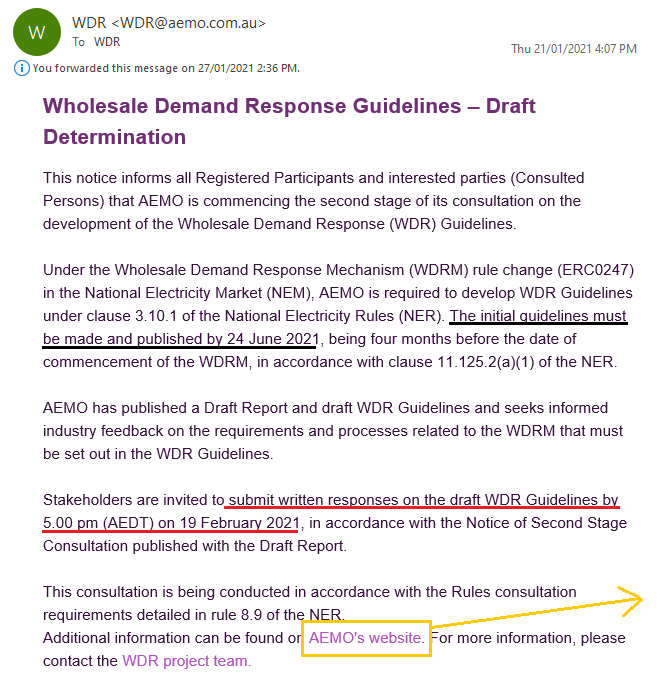 The email links to this page about WDR on the AEMO website, and in particular to the two new documents published on the same day (21st January 2021):

The guidelines (document on the right) represent an important milestone in the journey to implementing the wholesale demand response mechanism.

They’ll be central for all parties involved in the mechanism.  As such, and given our long-time interest in (and facilitation of) demand response in the NEM, I’ve taken the opportunity to complete a quick initial review.

The draft guidelines set out:

A draft report accompanies the guidelines presenting the issues raised and considered during the first phase of the consultation. It includes submissions to the consultation process and AEMO’s reasoning and decisions that have shaped the draft guidelines.

The report reminds us that:

There’s clarification in the report that aggregations may be made up of WDRUs only within single demand forecasting areas. In practice this means NEM regions, apart from Queensland where there are three forecasting areas. Importantly, each load in the aggregation needs to be a WDRU and therefore meet the eligibility and classification requirements.

And that’s why another clarification caught my attention – The guidelines also clarify aspects of the existing requirements in the NER related to eligibility for classification as a WDRU. Loads served by multiple NMIs will not qualify – the load must be served through a single connection point which does not comprise electrical equipment that can switch the load between multiple connection points. This, in practice, appears to mean the load must be connected to the grid through a single NMI thereby potentially eliminating sites with backup supply NMIs or multiple NMIs.

The guidelines reflect submissions requesting data for DNSPs – data required to manage WDR in the distribution for network reliably and security is included to accommodate DNSP needs.

Consistent with the NER (3.13.4 (p) and (q)), those with an interest in the market can look forward to seeing bid and dispatch information publicly available on a next-day basis.

Readers should note, however, that we understand that it’s only the Dispatch Target for the ‘Negawatt’ component that will be published next day, with the equivalent of the ‘Initial MW’ value for actual dispatch (and therefore the response actually delivered) just assumed to be true.

On 21st October 2019, Paul McArdle had previously written about the need for all three sides of the triangle to be published for real transparency to be realised.  Without this, for instance, our understanding is that the market won’t be able to query the ‘Raw Off-Target’ performance:
(a)  as has been done in this series of Case Studies for Semi-Scheduled assets; and
(b)  which is featured in the ‘B’ Pages for every energy-market focused DUID for calendar 2020 in the Generator Statistical Digest 2020 (which will be released on Monday 1st February next week).

One of the biggest reforms that was undertaken in the NEM over the past 20 years, from a Market Transparency perspective, was the commencement of publication of real-time SCADA readings for most DUIDs via ‘Initial MW’ … which are both:
(a)  visible in great detail through commercial products such as our ez2view; and also
(b)  visible at summary level via through free-access tools such as our RenewEconomy-sponsored NEMwatch widget.

Unfortunately, the design of the WDR mechanism does not facilitate the same level of real-time transparency.

Related to the topic of dispatch performance, the draft report provides more detail on regional telemetry thresholds (MW response capacity). These aim to mitigate risks in off-target responses coinciding with scarce real-time visibility of demand response units, which will impact operational forecasts. The threshold creates a first-in-best-dressed situation where additional telemetry or communication requirements may be required for loads seeking to be classified after the threshold is reached. In SA, for example, the proposed threshold is 32 MW, yet the guidelines also specify when thresholds are to be reviewed.

Interestingly, and perhaps indicative of the what’s in store once we go live, the thresholds appear to be partly informed by analysis of historical RERT performance. RERT performance was assessed on an energy basis comparing RERT delivered to activation targets (‘deviations’) over the course of the summer of 2019/2020. While the report remarked that 5-minute performance variability could be different (presumably higher) than the indicative RERT performance, the results may still provide an indication of what WDR performance could initially be. The summary included in the draft report was “For each of the five recorded activation events, the observed deviations from the target were -7%, 25%, 12%, -16% and 17%”.

Looking forward into 2021, the final guidelines are expected to be published late March. This is a decent buffer to the minimum 4 months needed before the start of the mechanism for registration, classification, and transitional tasks.