Springtime is generally a time for renewal in nature.

For centuries religions have co-opted this natural phenomenon to institute their own religious observances on this theme.

And so it is that the market bodies (AEMC, AEMO and so on) have implemented its own ‘spring cleaning’ for the NEM with the commencement of Five Minute Settlement at midnight this morning (Friday 1st October 2021).

We’ve started, and will progressively enhance, a bit of a background to 5MS on the ’Five Minute Settlement’ page of the WattClarity Glossary.

(B)  A very quick first look

The transition to 5MS occurred as the clock ticked over midnight on Friday morning … ‘NEM Time’, of course.

Curiosity killed the cat (our company we have invested $100,000’s in getting ready for the transition – which is just a drop in the bucket compared to the mammoth $100M’s investment the industry has made) … it was natural that I was interested to see what actually happened as the market ticked over midnight into Friday morning.  So here’s a brief ‘before’ and ‘after’ look for posterity:

Like a bunch of (very nerdy) kids huddled around the chimney, wondering what the ‘5MSanta-Clause’ might place in our stockings on 5MS-eve, there was a growing amount of pre-emptive celebration on Thursday 30th September 2021.   I was amongst that group (and not ashamed to admit my energy-geekiness) with this tweet after one of a number of price spikes in the QLD region on Thursday: 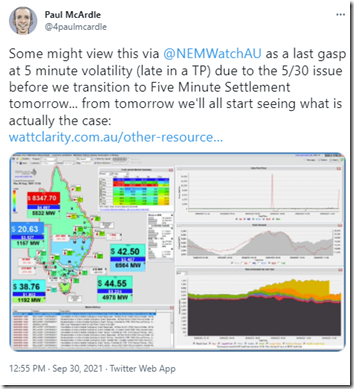 That image came from the recently released NEMwatch v10.2 version of the software that has been serving clients across the NEM for more than 20 years now!    A similar comment here on LinkedIn has garnered some comments from others looking ahead to the change.

Other contributions that I noted included:

(a)  Ben Skinner and Ben Barnes had written ‘Five-minute settlement starts tomorrow’ for the AEC … an article that’s particularly worth reading because of the ‘reflective look on how this came to be, why it was changed, and some of the adventures along the way.’!

(b)  On RenewEconomy on Thursday, Giles Parkinson wrote about ‘Battery storage charges up for big switch to 5-minute settlements’.

(c)  On PV Magazine, David Carroll wrote about ‘NEM in for shake-up with five-minute settlement to start’.

(d)  Internationally in Energy Storage News, Andy Colthorpe wrote back on 20th September that ‘Australia’s electricity market rule change that will be ‘massive’ for batteries is imminent’.

… and there are no doubt numerous others.  It’s certainly a big deal!

(B2)  The night before Christmas (oops 5MS-mas)

Unlike that rhyme where ‘not a creature was stirring’, there have been plenty of people awake and either just holding their breath or (like us) helping clients work through last minute preparations for 5MS.  We’ve had our share of last minute client emails!

In this snapshot from the 21:25 dispatch interval on Thursday 30th September 2021 in ez2view, we can peer forward into the next day to see what’s forecast at this point in time with respect to P30 predispatch prices from first period in the 5MS environment being the 00:30 (5-minute) trading period: 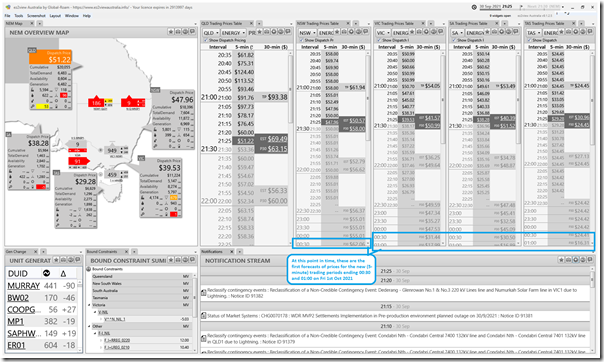 Remember that, with ez2view, you can ‘Build your own dashboard’ from thousands of different (widget) components … so this view is a bit different than what I’d typically use to illustrate what is happening in other articles previously on WattClarity.  Already we see a glimmer of the challenge of  Tripwire #1.

Fifty-five minutes later (at the 22:20 dispatch interval) we see we’re inching closer to D-Day, with with a larger price separation emerging between QLD+NSW (both around $50/MWh) and VIC+SA+TAS (around $20/MWh) as a result of the constrained flow on VIC-NSW interconnector: 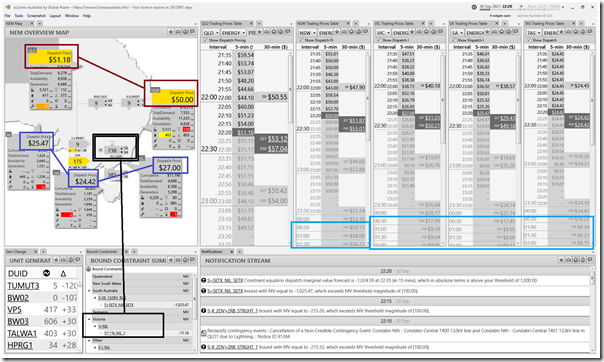 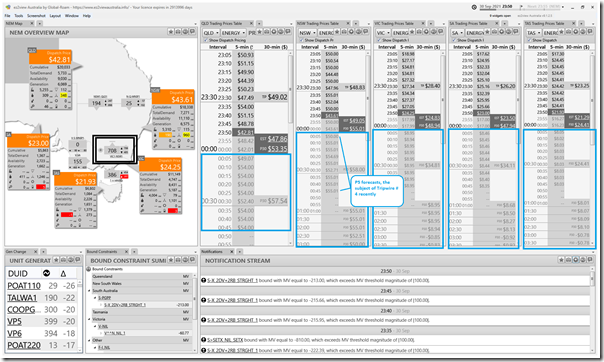 Prices still higher in QLD+NSW than in VIC+SA+TAS due to the constraints on the VIC-NSW interconnector … in turn driven by the ‘V^^N_NIL_1’ Constraint Equation.

For the last ever five-minute dispatch price before the commencement of Five Minute Settlement (i.e. the 00:00 dispatch interval) we see the disappearance of our ‘Estimated Trading Price in the Current Half Hour’ calculation that has supported many clients for many years: 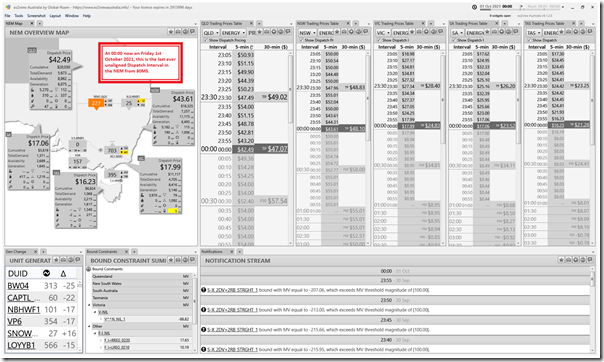 All that is left, now, is for someone like Craig Memery (who I have seen do similar before) to launch into some pithy rendition of ‘Auld Lang Syne’, with words charged with electricity meaning…

(B3)  Immediately after the start of 5MS

In the 00:05 Trading Period (also the dispatch price … but that’s old news) we see ez2view v9.1.2.5 adjust to display the new reality … complete with a couple tripwires for the unwary.  We have tried to make them a bit more apparent in the design of this new reality in the software, and discuss further below! 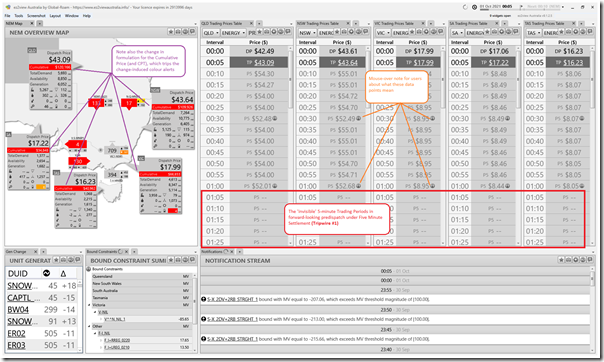 The AEMO even had their own small mini-celebration with Market Notice 91389 … released at 00:02, so not quite making it into the ez2view ‘Notification Stream’ in the snapshot just beforehand above:

AEMO would like to notify the market that as of 0000 hrs 01/10/2021, AEMO will be settling the NEM on a 5 minute basis, in accordance with National Electricity Amendment (Five Minute Settlement) Rule 2017 No.15.

Please contact the AEMO Support Hub on 1300 236 600 if urgent assistance is required.

By the 00:20 Trading Period we start to see Tripwire #1 start to propagate, and Tripwire #2 enter the frame as well: 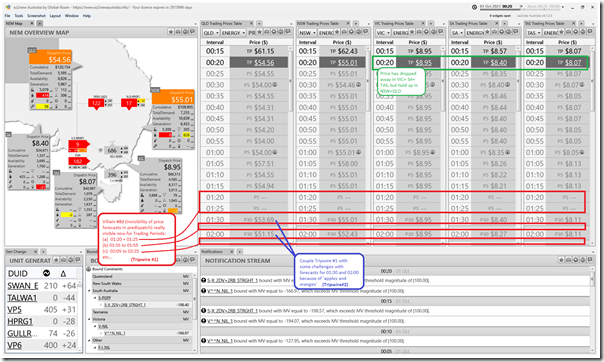 So after referencing these tripwires, let’s rewind back to when we explained about them earlier….

(B4)  A reminder of these tripwires

Back on 10th June 2021, as part of our preparations for 5MS, we posted an article about ‘Three potential tripwires looming in October 2021, for those who are not wary’ … two of which relate to Five Minute Settlement (and pragmatic design decisions made by AEMO in the interests of actually delivering the 5MS project in a reasonable period of time), and another one related to the Wholesale Demand Response Mechanism which follows hot on the heels.

Adding in a fourth that we identified later, it’s worth re-iterating these together:

(B5)  Further into the future…

As time progresses, we’ll look forward to posting a few observations about some early outcomes from Five Minute Settlement.

Indeed, we’ve already been asked to present to an externally-organised event in early December on the topic of ‘Early Lessons from Five Minute Settlement’.  More about that later.

So it seems like we have another incentive to add another appendix into GenInsights21 for its release (we’re now also aiming for early December 2021) … to go into some detail about  ‘early lessons from Five Minute Settlement’!

We have contacted each of our clients to point them at release notes for each of the products we supply related to the NEM (the main ones being NEMwatch (Release Note), NEMreview (Release Note), deSide® (Release Note) and ez2view ) … so if you have not received an email, and are one of our clients, please give us a bell (+61 7 3368 4064) to let us know.

There’s a number of snapshots above to illustrate some of how ez2view has changed with the v9.2.1.5 release as we ticked over into Five Minute Settlement.

We saw Ryan Wavish present on this topic at All Energy 2014, and invited him to write an article for WattClarity highlighting some of the learnings of the ARENA-funded study.

On 4th December 2015, Sun Metals (a zinc smelter in northern Queensland, and also one of our initial deSide® clients) submitted this rule change request to the AEMC: In the 10-page proposed change, my sense is that the key points…

Third article already today … this one about AEMO and Reserve Trader in the NSW region.