A threshold for accuracy and threshold for bias has been set to evaluate whether a load’s baseline methodology is acceptable for the Wholesale Demand Response mechanism.

Just prior to the publication of the Wholesale Demand Response Guidelines (final) the draft report and determination on the Baseline Eligibility Compliance and Metrics Policy, and its accompanying draft policy, was published (March, 2021).

Given the threshold values in the draft policy, we’ve tested some example load profiles against resultant baselines to get a feel for how stringent or relaxed the thresholds are.

Initially, when the WDR mechanism goes live, there will be four baseline methodologies available for adoption based on the X of Y approach. This approach denotes that X days of load (or consumption) data from the most recent Y days will be used to construct the baseline. At commencement of the WDR mechanism a “10 of 10” approach will be used:

The four methodologies proposed for the start of the WDR mechanism are differentiated by which days are applicable:

Once the days are determined, the baseline is formed by summarising the load data into one value per period:

The baseline will be applied to settle WDR Unit activity after WDR events have taken place. It is designed to limit potential over or under payment of WDR and does not play a role in operational activities.

Further information on baselines (including other methodologies and reviews) can be uncovered in these reports:

The thresholds for eligibility and compliance

The thresholds are the key parameters that need to be met for a load’s baseline to be acceptable.

The baselines will be evaluated on data within eligibility and compliance windows, proposed to be between 3pm and 8pm market time – a narrow window aimed to cover periods when high price periods typically occur in the NEM and thereby allow a greater range of loads to be eligible.

AEMO notes that the start of the mechanism coincides with the transition from 30-minute to 5-minute trading intervals so historical load data (before October 1, 2021) will be on a 30-minute basis. The reduced variability in the 30-minute data may well make it easier for the baseline to meet the required thresholds.

So, do the thresholds still accommodate much load variability?

In its draft determination on the policy AEMO noted that 6 submissions included remarks on the accuracy threshold of 20% and that half of them expressed agreement with the threshold.

I decided to put both thresholds into context so I could get a preliminary feel for how much variability these thresholds tolerate.

To do this I’ve have simulated four loads to test and elucidate what shapes and profiles might breach these thresholds.

For convenience, the loads are labelled “Steady”, “Smooth”, “Blocky” and “Variable”.

The Steady load, although exhibiting some temporary dips in demand, still clearly meets the accuracy and bias thresholds. 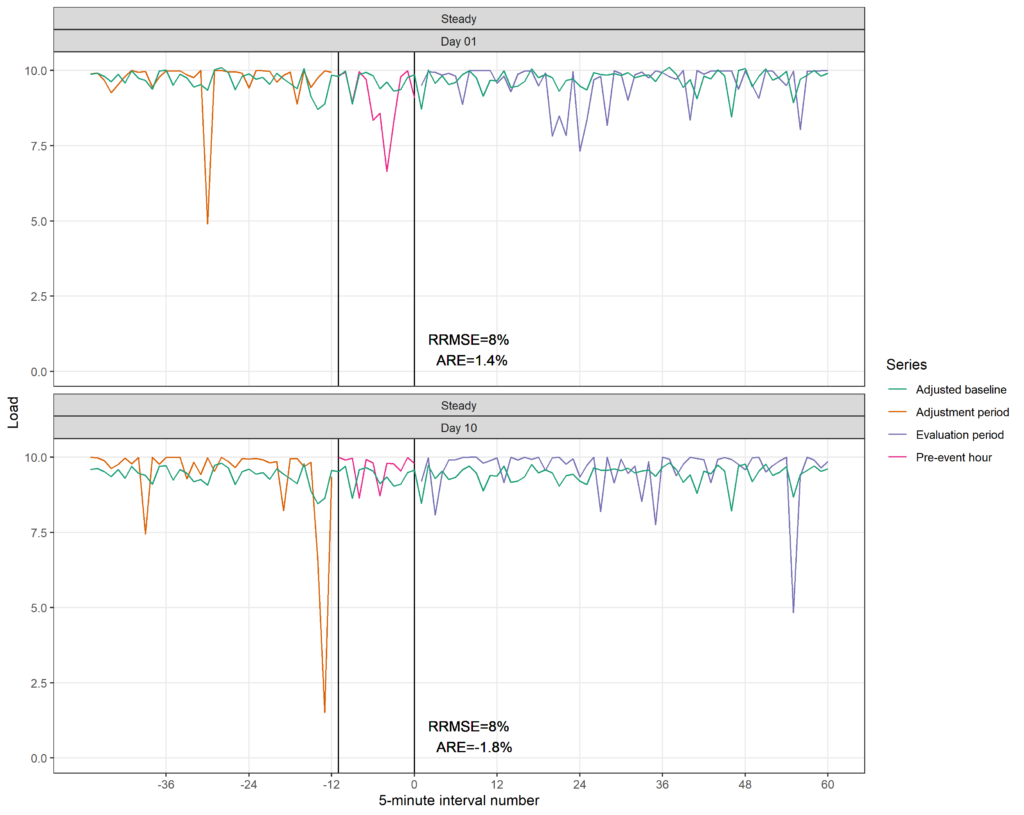 The Smooth load, although less visually variable than the Steady load, has a relatively high bias on Day 10. This is caused by a drop in demand over the pre-event hour leading to a departure from the adjusted baseline level. Nevertheless, the ARE is 3.7%, within the 4% threshold. 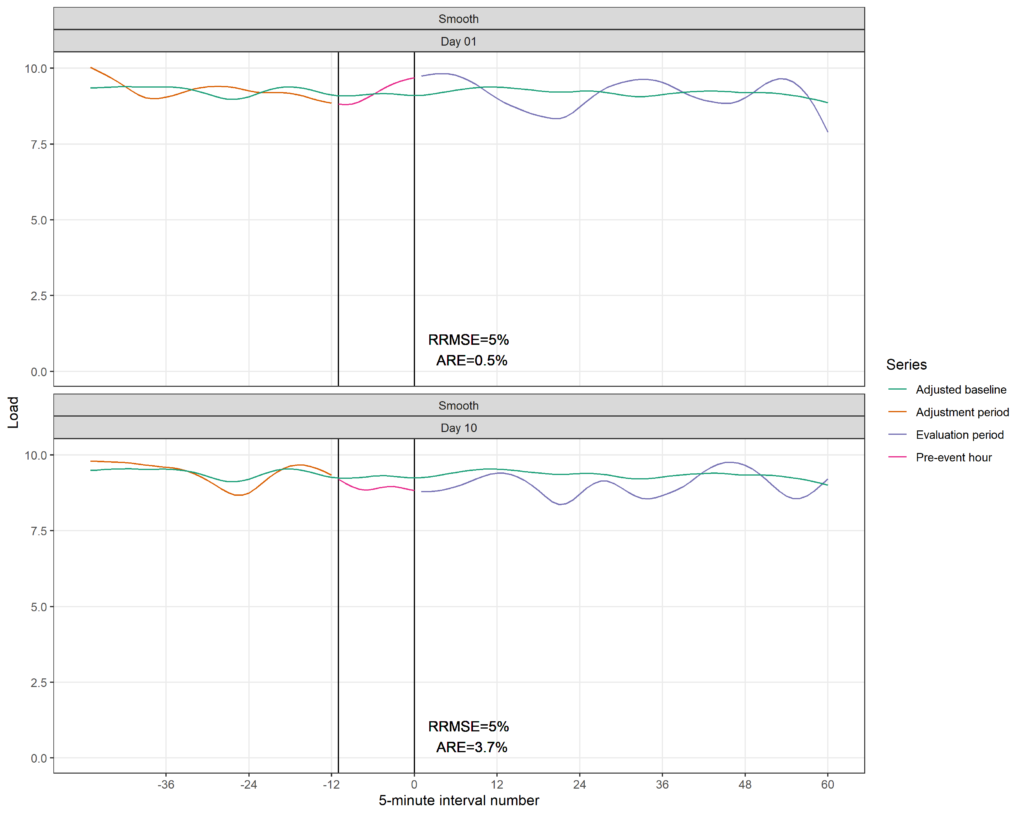 The blocky load exhibits change at a 30-minute granularity. Although demand drops in some periods by more than 20%, the relative RMSE is still well within the 20% threshold overall. 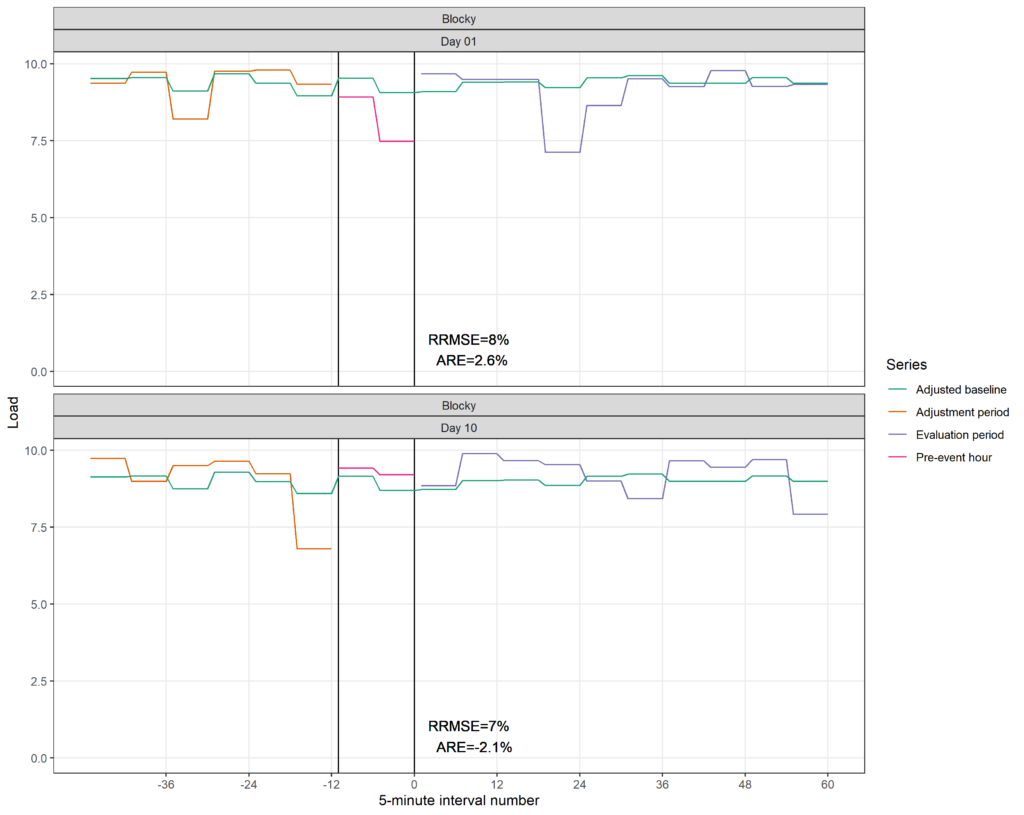 The Variable load was given the greatest level of random variability and has less of a typical and predictable demand level. The accuracy and bias scores both exceed the thresholds on the Day 10 profile. Although the variability was high on Day 1 the bias threshold was not exceeded as positive and negative baseline differences generally cancelled each other out. 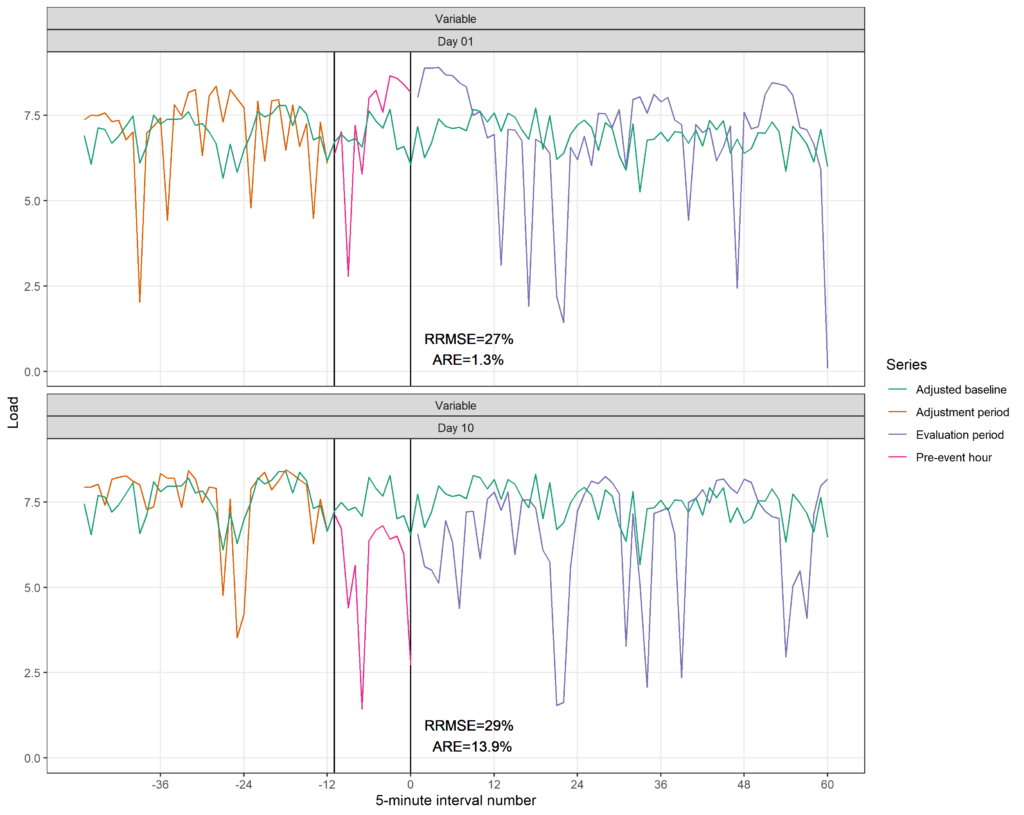 From this quick and hypothetical assessment two things stand out:

Some pictorial records of a day when a new record demand was set in Queensland.

Potential Tripwire #3 When is a load not a load?

A feature of the upcoming EMMS technical specification that distinguishes demand response units from scheduled loads could impact some users of NEM data, if left unmanaged.

Demand Side Response in NSW on 4th February

On the 4th of February at around 11am energy users in NSW appear to have curtailed their load in response to high prices, resulting in a significant drop in demand. Simultaneously, network conditions and generator rebidding caused the NSW pool price to jump back and forth between extreme prices close to VOLL ($10,000/MWh) and the Market Floor Price (-$1,000/MWh).