This morning (Tuesday 31st August 2021), the AEMO released its Electricity Statement of Opportunities (ESOO) for 2021:

Click on the images above to link to the relevant page.

Each year, the publication of the ESOO is one of the significant events on the NEM calendar.

For the past couple years we have been unpacking some of the highlights of that particular issue of the ESOO for our readers here at WattClarity.  This is continued for the 2021 ESOO:

… with plenty of other articles speaking more generally about Reliability and ‘keeping the lights on’.

In a brief scan of the main media mastheads today, below are the articles that I could spot:

1)  In the AFR on page 3, Angela MacDonald-Smith wrote about ‘Power grid faces test from solar boom’ – pointing out one of the medium term challenges that is discussed in the ESOO: 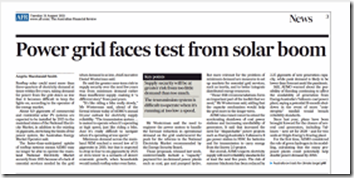 2)  In the Australian on page 2, Perry Williams wrote about ‘Power more reliable, but coal still a risk’. 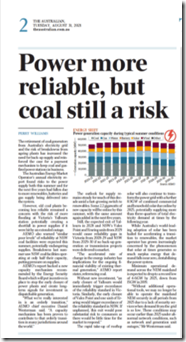 … and it’s also noting that (not specifically mentioning the ESOO) Perry Williams also wrote about ‘Renewable energy domination on the way: AEMO ’ – which had a different title at page 13:

3)  In a quick scan this morning, I could not see anything in the SMH or the Age

PS – could not find this morning, but see now that Mike Foley and Nick Toscano wrote about ‘Electricity grid powers on despite demise of coal as renewable surge’.

4)  In the Guardian, I found the article ‘Renewables could meet 100% demand in Australia at certain times of day by 2025, report says’ by Katharine Murphy.

5)  In RenewEconomy at present there are two articles:

‘Rooftop solar could meet up to three quarters of total grid demand by 2025’ by Giles Parkinson.

6)  In a quick scan this morning, I could not see anything in PV Magazine

… but perhaps the biggest story (in its absence) was no story along the lines of  ‘the lights are going to go out!’, which we certainly have seen at times in the past.

Another set of ‘file creation’ data for the P5 Predispatch prepared by one of our team yesterday (Monday 15th November) suggests the file creation latency issues we highlighted in August are ongoing.