In previous commentary on AEMO’s annual Electricity Statement of Opportunities (ESOO), I’ve taken time to explain the purpose of this report, unpack what some of its key measures mean, and outline the modelling approach and assumptions AEMO uses to produce its results. Paul McArdle has also referenced more past ESOO commentary in his short piece this morning.

Here I’ll take those prior explanations as read, and simply summarise my impressions of the key takeaways this year’s edition, along with a couple of side-trips into some (I hope) interesting detail.

At the headline level, AEMO is projecting no reliability gaps over the next seven summers – even against the recently introduced Interim Reliability Measure requiring Expected Unserved Energy (USE) to be less than 0.0006% of total annual consumption (formally, this measure only applies until 2024-25 after which the regulatory threshold reverts to the NEM’s Reliability Standard of 0.002% unserved energy).

It’s always challenging to convey what these reliability thresholds actually mean, but one way to characterize the 0.0006% USE measure is that it very roughly equates to there being a one in twenty chance of a single outage event over a given summer where 10% of system load is shed for a few hours, and a 19 in 20 chance of no shedding at all (but note there are an infinite number of alternative ways of getting to the same level of USE).

By comparing regional projections of USE percentages from the last three ESOOs, we can see just how much projected reliability has improved in the key regions of NSW, Victoria and SA (Queensland and Tasmania have maintained negligible projections of USE throughout AEMO’s recent assessments): 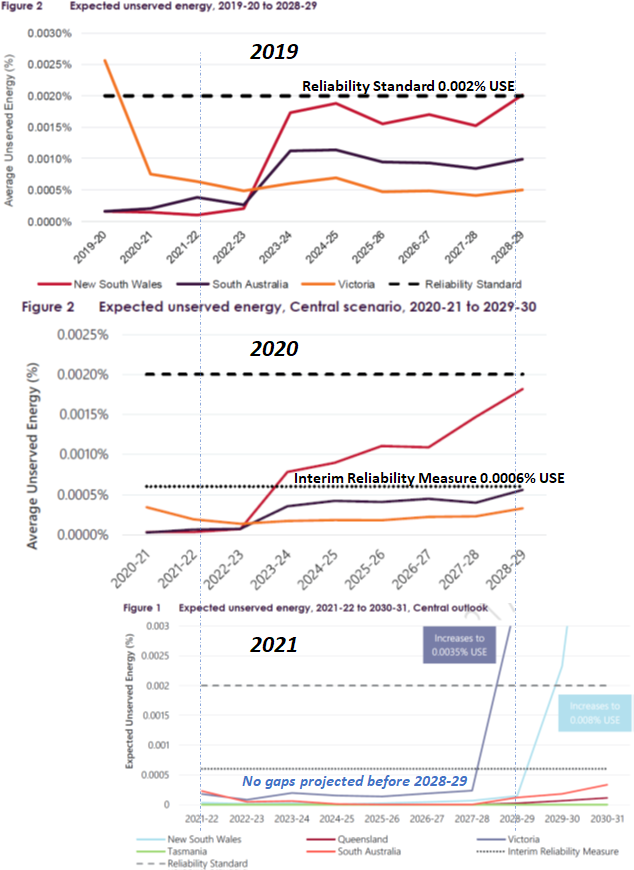 Notice that retirement of Liddell by 2023-24 barely registers on this year’s NSW projections, unlike prior ESOOs. In addition to newly committed renewable and storage capacity, AEMO has added the Federal Government-backed Kurri Kurri gas turbine (750 MW) as a committed project in NSW.

Improvements in projected reliability over recent ESOOs are not surprising, as they reflect new commitments of supply and transmission capacity and steady or declining projected demand levels. It’s critical to remember that AEMO’s ESOO projections for supply capacity reflect only projects which it regards as firmly committed to proceed, and this pipeline naturally evolves from year to year as new projects reach the commitment stage. For this reason alone, breathless press reporting on the ESOO, screeching about “looming summer blackout risks” is nearly always misconceived. Perhaps this year there won’t actually be any!

The sharp increases in projected USE (ie decreasing reliability) in the out-years of this year’s projections for Victoria and NSW reflect the retirements of Yallourn (2028) and Vales Point (2029-30) respectively. No doubt well before then additional projects will become committed and start to lower these projections. In fact AEMO makes just this point in a later chart, showing how its assessment would change with the addition of supply and transmission initiatives currently well in the pipeline but not yet committed: 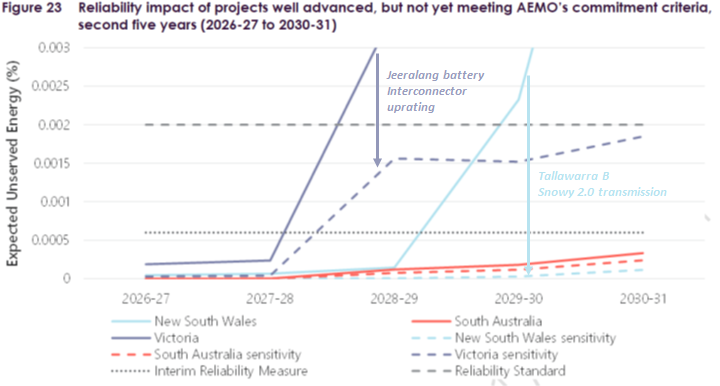 On the demand side, AEMO is projecting somewhat lower annual energy drawn from the grid than in prior ESOOs, but essentially steady maximum demand levels: 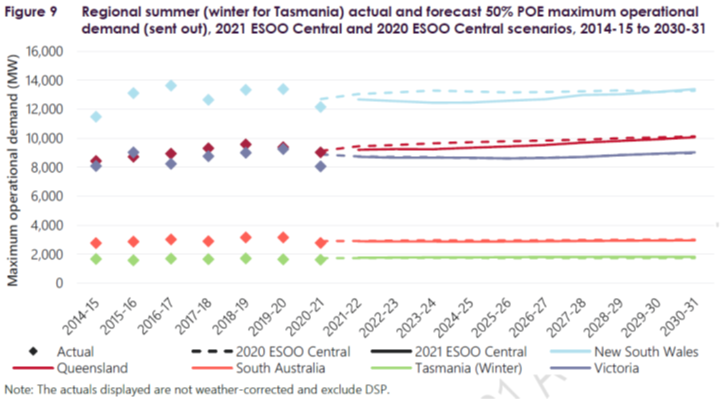 On the other hand, AEMO’s forecasts of minimum grid demand – a relatively recent addition to ESOO publications – are declining dramatically, particularly in Queensland and NSW. This reflects ongoing growth in distributed PV generation well above AEMO’s previous projections. More on the implications of this later. 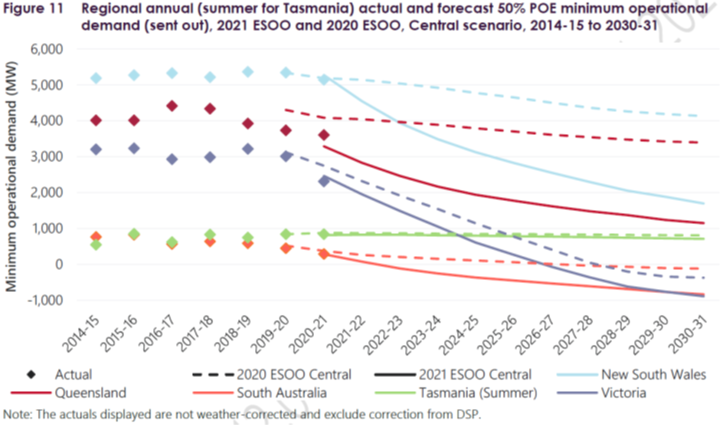 In addition to weather-driven uncertainty in demand and wind and solar generation levels, breakdown (forced outage) rates at large thermal power stations have been a recent focus in ESOO publications, as coincident outages of these units take out large blocks of supply. We’ve seen multiple instances of this happening in recent years (summer 2018-19 for example).

This year’s reported actual and projected outage rates at least show that some improvement is expected from the frankly embarrassing levels seen recently in the NSW black coal fleet, but still no major change from previous ESOO projections. Clearly, expecting suddenly improved performance from ageing stalwarts would be the same kind of vain hope normally confined to sports tragics and whoever booked Meatloaf for that AFL Grand Final a few years back: 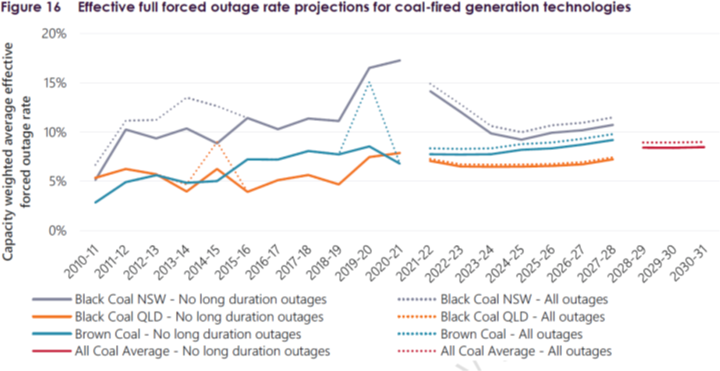 It’s well recognized that the increasing role of weather-dependent wind and solar generation, along with temperature-driven demand peaks, adds to the general complexity and variability in supply-demand balance. One of this year’s ESOO charts highlights this in an interesting way: AEMO injects weather variability into its reliability simulations by sampling from eleven recent “reference years” to generate weather-variable but internally consistent traces for demand, wind & solar output, temperature-driven transmission capacity etc. The chart below shows that nearly all the projected unserved energy occurring in AEMO’s modelling for South Australia next summer is associated with the weather pattern sampled from just one of these reference years, even though in this sampling process historical maximum demands would be scaled to AEMO’s forecast future levels – in other words it is the weather pattern in this reference year, not the historically observed maximum demand, that drives the “outlier” level of USE: 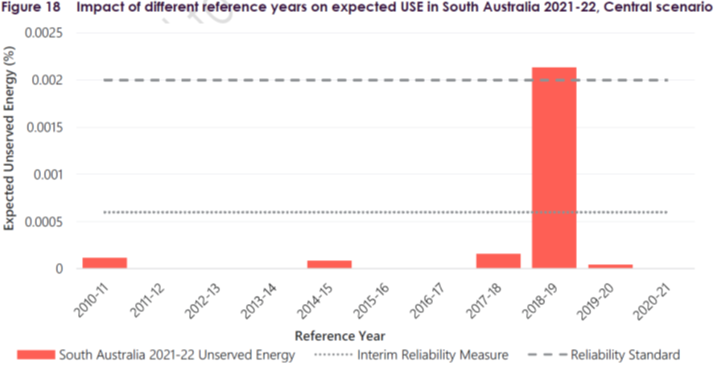 This phenomenon will become increasingly relevant as wind and solar penetration continue to increase, and may ultimately require AEMO to broaden its sampling approach so that reliability results are not unduly skewed by the presence (or absence) of weather patterns that are particularly challenging or benign for system reliability.

Moving further ahead as the system gets more and more of its energy from weather-variable sources, and relies on storage capacity when these sources are low, we might begin to see the phenomenon of “dünkelflaute” – long calm periods in winter when solar production is down – becoming a driver for system reliability levels, and less focus than historically on summer peak demands being the critical period.

Tightening the standard could be expensive

Another interesting side-observation in the ESOO results relates to the size of reliability “gaps” – additional megawatts of capacity that AEMO calculates would be required to reach the reliability thresholds in out-years following large power station retirements if nothing else turned up (although as explained earlier this is inherently unlikely).

While the following calculations are purely notional, in the limit they do illustrate just how expensive it could become to close a gap between the Reliability Standard of 0.002% USE and the Interim Measure of 0.0006%. The table below shows that in Victoria for 2030-31, AEMO estimates that bridging the gap between these thresholds would require an additional 1,645 MW of dispatchable capacity: 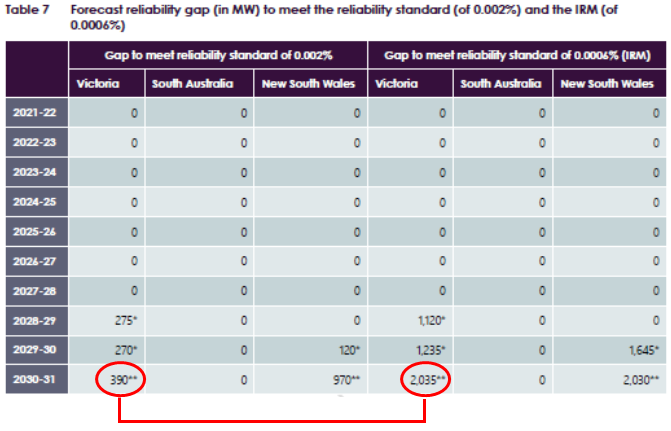 In some respects this is a nonsense calculation, because new capacity is very likely to turn up, being justified on investment cases much wider than simply addressing a tiny difference in unserved energy. Alternatively, demand side providers of RERT capacity (procured by AEMO if the market itself won’t close a reliability gap) might offer callable demand reductions at substantially lower costs. However the exercise does show that chasing down reliability gaps which are already very small can in the limit become very very expensive.

Security is the new Reliability

Moving away from reliability in periods of peak demand and tight supply, recent ESOOs have increasingly emphasised other challenges brought by the transition to non-traditional generation sources. Reliability deals with having enough supply capacity to continuously meet varying demand, with summer demand peaks traditionally being the most critical in most NEM regions. System security is the robustness of the grid to maintain stable operation through inevitable contingencies such as lightning strikes, transmission line trips, and generator unit failures which are foreseeable and inevitable, but highly unpredictable in timing.

This year’s ESOO continues the recent focus on security, one aspect of which is grid robustness and operability at periods of very low demand, particularly when this is driven by high levels of distributed PV generation. This ESOO chart of the NEM-wide loadshape on days of low demand shows just how rapidly this is changing: 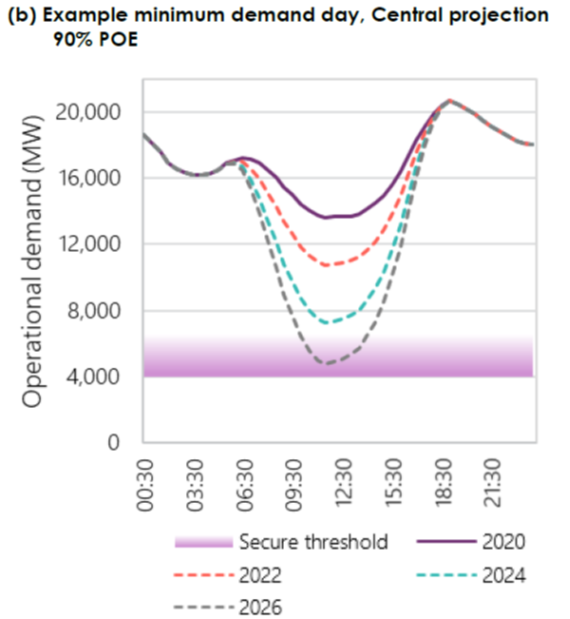 While the following table shows that at regional level there are even more immediate challenges arising: 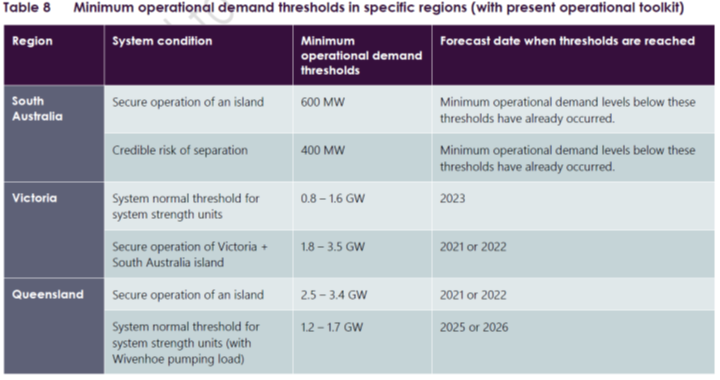 It’s projections like this that have no doubt led to statements from its CEO that AEMO should aim to develop capability to operate the grid with up to 100% of instantaneous supply from renewables – it’s not because this is necessarily AEMO’s desire or preference, but if the grid operating model can’t be adapted to accommodate the possibility, it’s clear that numerous and increasingly frequent interventions will be required to maintain system security well before that level is reached.

Re-engineering the NEM is urgent – AEMO

Chapter 6 of the ESOO – for a second year the longest single chapter of the document – sets out in detail many of the security and other transition challenges mentioned above, and possible initiatives and reforms required to address them. It’s a very long list, and frankly one that seems very ambitious to achieve in practice given the ponderously slow pace of regulatory and market “reform” in the NEM. I won’t attempt to summarise the chapter here, but it’s well worth reading just this section of the ESOO for an insight into the scale and breadth of the technical and institutional adaptations that AEMO believes are necessary. Excessive focus on side-shows like the ESB’s proposed “capacity market mechanism” are undoubtedly missing many far more important points in this discussion.

Some initial, scattered, thoughts (late on the day of its launch) about the AEMO’s first production of the Electricity Statement of Opportunities for 2009