Over the weekend I noticed Dylan McConnell had tweeted about this new low mark for aggregate generation from brown coal on Saturday: 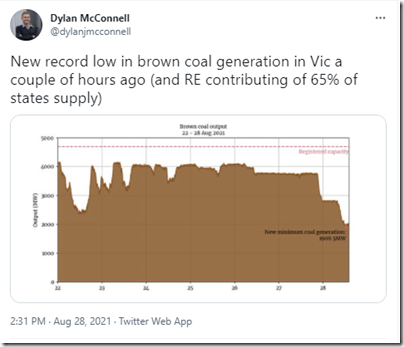 As a bit of a distraction this morning, opened up NEMreview v7  and took a quick look at what I could see:

Scanning back to the start of 2011 (i.e. so encompassing a bit over 10 years) we see the following trend: 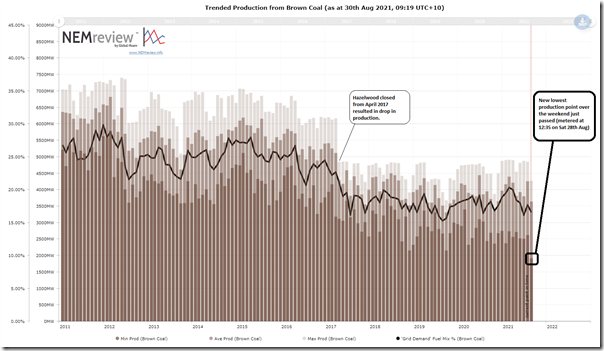 Those with a licence to the software can open their own copy of this trend here.

We can clearly see the drop in aggregate supply from brown coal that occurred with the closure of Hazelwood at the end of March 2017.   As that article notes, the closures of Northern (in SA) and Anglesea and Morwell (in VIC) came before that – but these were not as large a contributor to the energy mix, so don’t really show as clearly on the trend from 2011 to 2017.

Using NEMreview v7 again to ‘zoom into’ August 2021, here’s a trend of the same data sets: 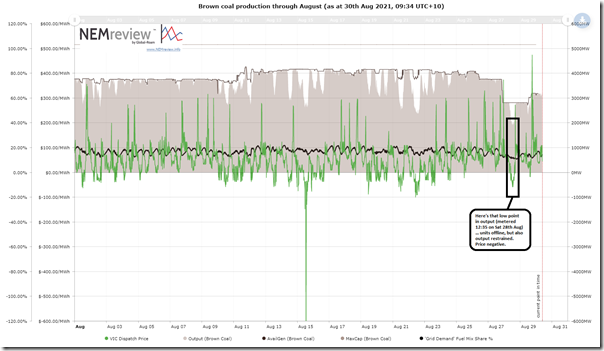 Here’s the query, for those who want it.

No time to delve any further, other than to add in this snapshot from ez2view at the 12:35 dispatch interval on Saturday, showing what else was supplying ‘Grid Demand’ at the time of this low point in Brown Coal generation (1,908MW metered output at 12:35) from the Latrobe Valley: 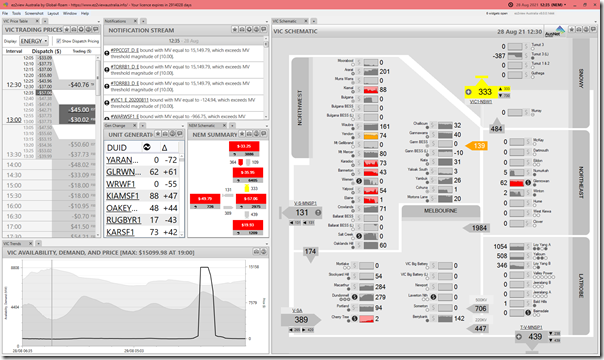 This new ‘low point’ record is apt, given last week’s release of the ESB’s ‘final’ advice to the Energy Ministers … and also tomorrow’s scheduled release of the AEMO ESOO 2021.

When we finally find time to work through what’s required to finalise GenInsights21 for release (won’t be Q3 2021!) I will be interested to see what this meant for aggregate provision of synchronous inertia in the Victorian region at the time.

This is the 11th Case Study in a series (looking at extreme outcomes of Aggregate Raw Off-Target for Semi-Sched units). We’ve rolled into 2018, now and (coincidence?) this one is much more complex than the first 10 from the earlier years …

Price spikes in SA and VIC on 21st April