The Callide C4 Catastrophe (which occurred just under 2 weeks ago now, the effects of which are still being felt) has caused many to wonder about the effect it will have on electricity pricing.

… and on Tuesday morning I saw that Perry Williams had written ‘Shock in store as outages, cold weather and demand cause power price surge’ in the Australian, published Monday evening.

So I thought I would quickly pull together a few artefacts using our NEMreview and ez2view software applications to provide some context to the discussion:

In the first chart (query is here for those who have access to their own licence to NEMreview) I’ve trended daily average data since the beginning of the year: 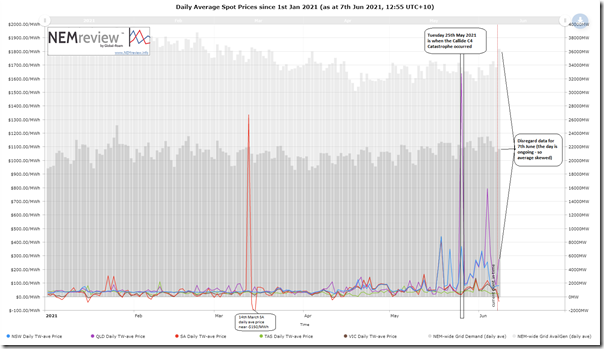 We can clearly see that:

1)   Prices in QLD and NSW have shifted up following the 25th May event:

2)  … but also note that there was some volatility in NSW and QLD earlier in May before it happened:

(b)  We’d been preparing some analysis of this prior to the Callide event in any case (we may never get back to that!)

Less clear is that:

3)  There’s also been a shift upwards in prices in VIC and SA (which makes sense, given the interconnected nature of the NEM).

Also using NEMreview (query for this one is here) we look at end-of-day clearing prices for Base-Load Futures from ASX Energy … for Quarter 3 2021 (i.e. not Q2): 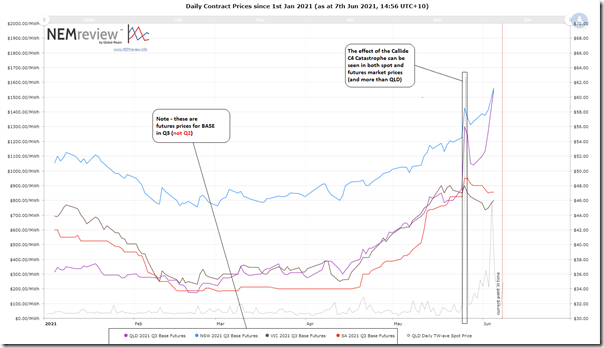 We can see a number of other things:

5)  Prices for these commodities had been increasing for all regions from about mid-April (i.e. well before Callide happened).

7)  Whilst VIC and SA have steadied out, prices for QLD and NSW have continued to climb (QLD sharply since Friday 31st May, perhaps on the release of the ‘long outage’ update?)

Pulling out an in-testing copy of ez2view v9 (for 5MS – so beware, there may be bugs!) I’ve dialled up a 20-day timeline of ‘as dispatched’ (including ‘true bids’ reflecting energy constraints on Wind and Solar Farms) bids on a 5-minute basis through until late yesterday (Sunday 6th June), and so straddling the May 25th Callide event: 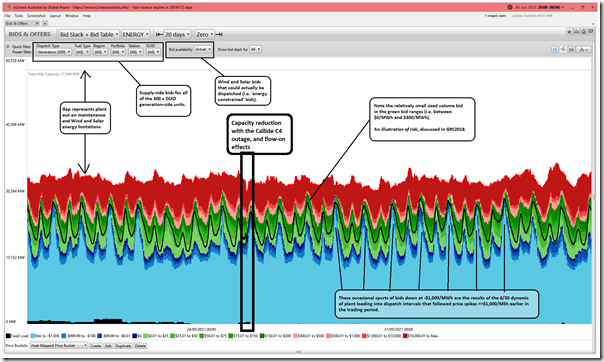 When we look at bids aggregated up on a NEM-wide basis:

8)  The drop in capacity that followed the Callide C4 Catastrophe can be clearly seen in the timeline….

9)  However on a NEM-wide basis, the (still) missing capacity (i.e. 4 x Callide units still offline till they start returning on the coming weekend) has been effectively replaced by other plant coming back from maintenance.  Obviously there are regional differences, though, as we will see below!

10)  I’ve also highlighted the large amount of capacity either offline for maintenance through this period or unable to generate because of lack of wind or sunshine.

11)  When we compiled the Generator Report Card 2018  over 24 months ago, we highlighted the declining volume of ‘green’ bids as one of the illustrations of how ‘the Level of Risk in the NEM is escalating’:

(a)  That particular page from the GRC2018 we copied out into this ‘Longer-term trends of low (and high) dispatch prices…’ article on 30th August 2019.  That trend has not gone away, and we will look forward to publishing an update in GenInsights21!

(b)  In the more recent/granular chart above, we can see clearly how blue (i.e. $0 and below) and red (i.e. above $300) bids clearly outweigh the green

(c)  But this was clearly also the case before 25th May!

(d)  What has changed is the shifting of volume within green to higher prices.

12)  The 5/30 issue has delivered some quite pronounced spikes in blue bids – with 1,000s of megawatts of capacity shifted in response to dispatch price spikes towards the start of the trading period (like after 17:05 this evening in QLD, coincidentally).

Here’s the same view, now filtered down to (just) generators in the QLD region: 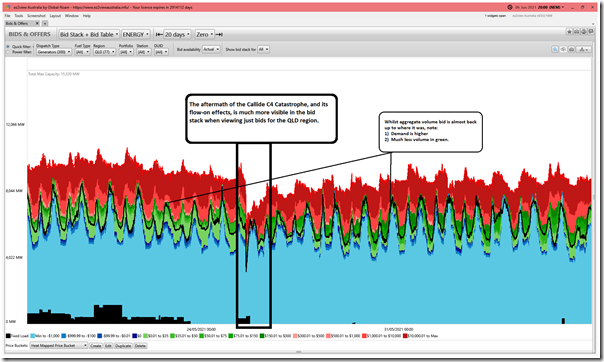 13)  The Callide dramas are much more clearly visible

14)  The capacity offered is still below where it was ~20 days ago (though it did climb significantly through the remainder of the 25th May as more capacity came back online).

15)  There has been a noticeable reduction of volume offered in green and, for what is (left) in green, it has shifted to higher priced bid bands

16)  Note also that ‘consistent’ demand has increased, compared to days preceding 25th May.

…. but before people get on their hobby horse with accusations of ‘gaming the market’ and so on (not referencing the AFR article above), I would suggest that they first think about what the loss of electricity supply from Callide has meant (temporarily) more holistically on demand for fuel supplies for the remaining thermal stations, and what that might have meant for such things as:

1)  the broader gas network, and also

3)  and broader considerations of risk/reward (i.e. sell too much product now and you may not have enough to sell when demand spikes and the wind/solar lulls and you really need it).

The same sorts of accusations were made following the sudden closure announcement of Hazelwood, but (in my view) not really properly thought through.

1)   Isn’t it time we matured a more realistic view (and conversation)?!

2)  We’re going to need it, in the energy transition that has a decade or two still to complete …

A quick look at this morning’s volatility – and also with respect to coal unit availability prior to the expected tight conditions this evening.

Five Minute Settlement has commenced … but beware some tripwires!

Yo-yo pricing in NSW today, and in QLD

Some ‘interesting’ price outcomes seen today in NSW and QLD.