The key piece of information relevant to the market was delayed return to service of the 3 offline (but workable) Callide units:

“This afternoon CS Energy informed AEMO that Unit B1 will be returned to service on 11 June and B2 on 21 June. CS Energy owns 100 per cent of Callide B.

CS Energy owns Callide C in a 50/50 joint venture (JV) with InterGen. Callide Power Trading, which trades the output of Callide C on behalf of the JV, has informed AEMO that Unit C3 will return to service on 22 June.”

On Wednesday last week (26th May) I had included this initial view of how the Availability schedule for the 4 x Callide units was affected by the catastrophe – using the ‘MT PASA DUID Availability’ widget in ez2view version 8: 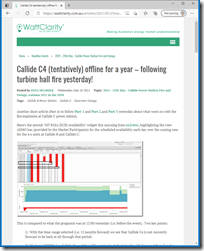 The ‘current’ MT PASA run at the time was from 09:00 on Wednesday 26th May (i.e. day after the event).  In the image below I’ve used the same widget (albeit in a pre-release copy of ez2view version 9 this time) 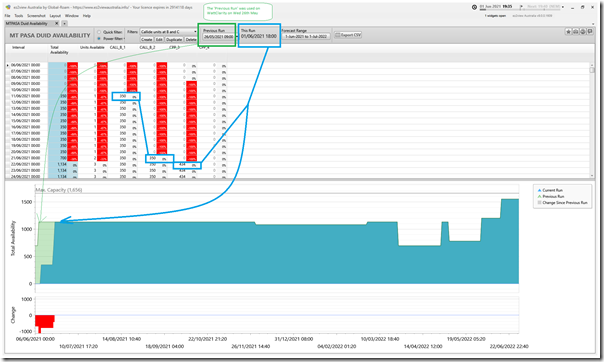 In the CS Energy news update above, they (rightly, and understandably) say “CS Energy’s first priority was safety as crews work”, and that this is the reason for the delayed Return to Service.

“There was a piece of metal in the roof. We didn’t know what it was, but it weighed 300 kilograms,” he said.

Especially having worked in turbine halls for other similarly sized units (though not at Callide), that certainly paints a picture of the scale of the damage!

With prices volatile again this evening (similar to what I reported Sunday evening – but also with its own additional factor at DDPS1), it looks likely that we’re going to continue to see Price Volatility and Low IRPM for a couple of weeks ahead…

An updated look at the ‘MT PASA DUID Availability’ widget in ez2view shows another delay in returning Callide C3 to service.