There’s been plenty of chatter about the likely accelerated closure of coal generators in the NEM (including the ‘Fast Erosion of Coal Plant Profits’ report by GEM-IEEFA).

So it was not really a surprise to see today’s announcement by EnergyAustralia that Yallourn will close in mid-2028 (four years earlier than planned).  Understandably, this has been covered in many media outlets, such as:

2)  By Angela Macdonald-Smith in the AFR with ‘Energy Australia to close Yallourn early’;

3)  By Perry Williams in the Australian with ‘Energy Australia to close Victoria’s Yallourn coal-fired power plant by 2028’;

4)  By Michael Mazengarb and Giles Parkinson in RenewEconomy with ‘EnergyAustralia to close Yallourn coal plant in 2028, to build world’s biggest battery’;

5)  By Jarrod Whittaker in the ABC with ‘Energy Australia to close Yallourn power station early and build 350 megawatt battery’;

… and so on (a fuller list of articles we find will be tagged into the growing Asset Catalog).

(A)  How has Yallourn been operating recently?

Thankfully, with ready access to the Generator Statistical Digest 2020 we can quickly take a look at the change in operating patterns 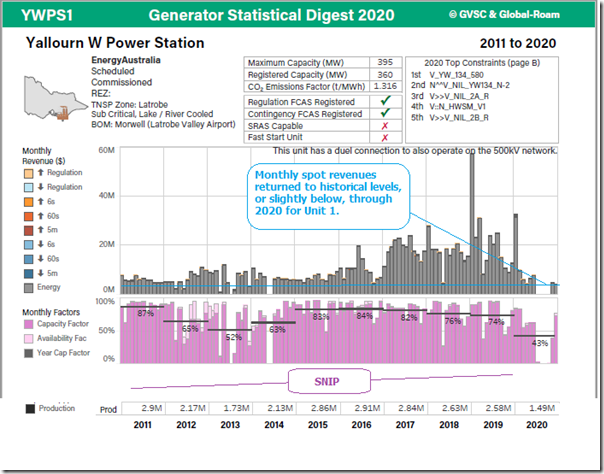 We can see that the capacity factor for 2020 (down at 43%) was significantly affected by the outage that spanned the 4-month period of July, August, September and October 2020.  However the unit still managed to produce a total of 1,490,000MWh over the year for the unit:

As some will remember (e.g. at a presentation for CEC Members following publication of the prior GRC2018) it’s much more important for renewable proponents to focus on the volume of energy produced by a solar or wind farm than the peak capacity … as it will help to educate the broader public about how many new projects need to be built to replace this (albeit quite depressed) volume of energy supplied by Yallourn unit 1 during 2020.

We also see that monthly spot revenues had subsided from the peak years of 2017, 2018 and 2019 (i.e. since the closure of Hazelwood) back to levels it has seen in the years to 2015, or perhaps slightly below (have not checked the specific numbers).

Here’s the same data for YWPS2, showing annual production of unit 2 up a more typical level of 2,140GWh over the 2020 calendar year … with this level similar to 2019, but well below the peaks seen in 2016, 2017 and 2018 when revenues were also higher (in part because capacity factors were higher): 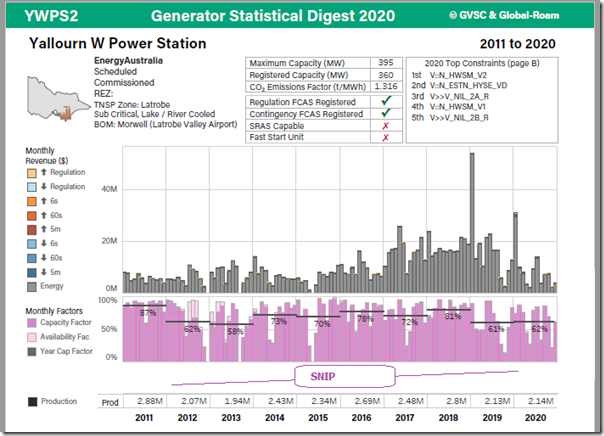 There’s much more that we could glean from the GSD2020, but that’s enough for this WattClarity article today.

With respect to the GSD2020, a couple notes:

1)  We’ve almost caught up on deliveries of the hard copies of those who have ordered the GSD2020 up until to this point – thanks for your patience, if you were one of the ones who’ve been waiting for us to catch up on the backlog of orders following release of the GSD2020 at the start of February 2021.

2)  Following requests from a variety of people, we’re finalizing a ‘GSD2020 Data Extract’ product that will be an optional extra for those who have purchased the ‘GSD2020 Document PDF’

3)  For those who want to access the GSD2020 themselves, please select which option:

(B)  Implications of this?

There’s be plenty more time* to think this through but the first thoughts that popped into my head were:

*  and, no doubt, plenty more time for continuing chatter about it – right out till 2028 and beyond

That the criticality of the VIC-NSW interconnector is going to be heightened, particularly at times of high demand in the Victorian region.

Hence with memories of the Texas dramas very present, and the ‘lessons learnt’ still being discovered, it would seem essential that the AEMO includes a stress test in its next version of the ESOO that models what the situation would be in summer 2028-29 if if were to be a repeat of summer 2019-20 including (and this is important) what happened on 4th January 2020 (but with the temperature profiles reversed).

An animation of 90 minutes this morning where the price gyrated wildly in response to a trip at Yallourn, and numerous subsequent reactions by market participants and the AEMO.

1 Comment on "Next domino? Yallourn closing in 2028 … four years earlier than original plan."