On Wednesday (16th June) I noted that YWPS3 had come offline again to conserve dwindling coal supplies after EnergyAustralia found ‘further instability in the Morwell River Diversion wall’ as a result of the ongoing flooding situation threatening the Yallourn mine – and hence the 4 units at Yallourn power station.

(A)  ‘Energy Emergency’ declared for Victoria

Yesterday (Thursday 17th June) there was the Victorian government’s announcement of the ‘Energy Emergency’ to enable swift action by EnergyAustralia to try to shore up the dam wall. 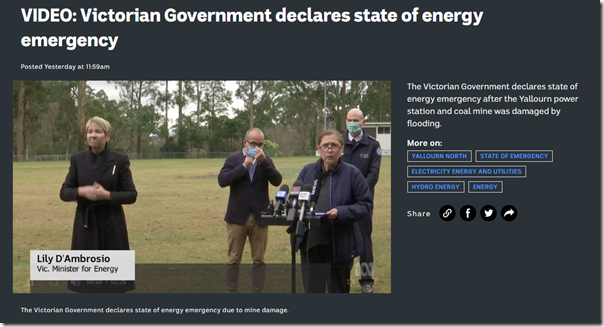 I noted that this was discussed in a variety of places, like:

2)  In the AFR with ‘Energy warning amid Yallourn emergency’;

3)  In the Age with ‘Yallourn emergency declared after storms as hardship payments kick in’;

4)  In RenewEconomy with ‘Victoria declares “energy emergency” to prevent Yallourn mine from collapse’;

Also, I found discussions about this:

1)  By Environment Victoria with ‘Vic energy emergency declaration needed, but questions remain’; and

… in other places as well which are being tagged into our ever-expanding Asset Catalog.

(B)  Operations at Newport Power Station cranked up

We’ve fielded several questions about operations at Newport Power Station (part of EnergyAustralia’s portfolio), which they have understandably cranked into heavy operations as a result.  To help illustrate the picture, I’ve prepared this trend query which clients can access themselves (with their licence to NEMreview v7) : 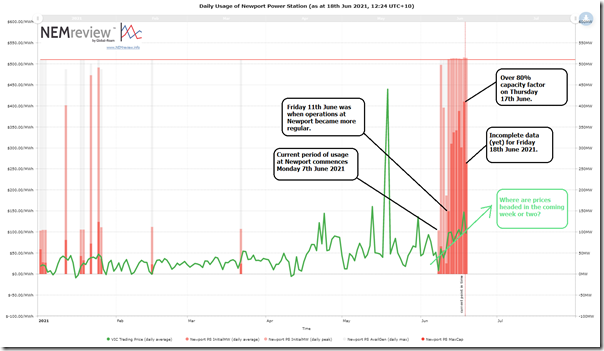 Winning a consolation prize, for Competition #4

Winning a consolation prize, for being closest to the mark in relation to peak Victorian demand this summer, is…