A short article today (especially for those for whom the islanding of South Australia in February 2020 is now but a distant memory) that’s a reminder that the repair work has not been completed more than 13 months on…. but it’s drawing closer now.

A credible contingency event during this planned outage could cause synchronous separation of the South Australia (SA) region from the rest of the NEM. If separation occurs, load may be interrupted due to the operation of the Automatic Under Frequency Load Shedding (AUFLS) scheme in SA.

The credible separation contingency is managed as follows:

– When power transfer is from SA to Victoria, contingency lower FCAS will be sourced from SA.

– When power transfer is from Victoria to SA, due to the 47-52Hz island separation frequency band advised by the SA jurisdiction, contingency raise FCAS is not sourced in SA and the AUFLS scheme may respond to low frequency events.

– Power transfer will be restricted on Victoria – South Australia interconnector (Heywood interconnector) to manage system security following the loss of the next contingency.

Forecast capacity reserves in the SA region are currently sufficient to meet electricity demand during the planned outage.

The following constraint sets have been invoked for this outage:

To look further into the information above we can quickly open up ez2view (now version 8) as follows:

(B)  A quick look at the Constraint Sets to be invoked

The Market Notice speaks of two particular Constraint Sets that are scheduled to be invoked (the AEMO lingo term meaning ‘used’) for the coming week (i.e. from this Friday morning 12th March to next Friday evening 19th March):

It’s the Constraint Equation that will, under certain market conditions, affect the Dispatch Target of DUIDs for Scheduled Generators/Loads, or Semi-Scheduled Generators, and also the Dispatch Target Flow on the interconnectors.  To understand what could be affected, you need to look into what’s on the Left-Hand Side (LHS) of each individual Constraint Equation, and the relative factors.

Our ez2view software can help with all of this.

Here’s a view of the current composition of the ‘S-X_BC_CP’ Constraint Set – which we see is related to what happens when both Black Range series capacitors are bypassed because of outage. 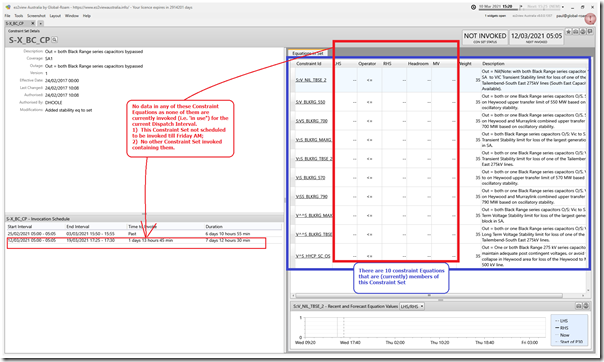 As noted, there are 10 Constraint Equations that are currently members of this Constraint Set (all of which are currently showing no data, as none of them are invoked currently – in this Set, or any other Set).

There are many more (i.e. than 10) Constraint Equations as members of the second Constraint Set: 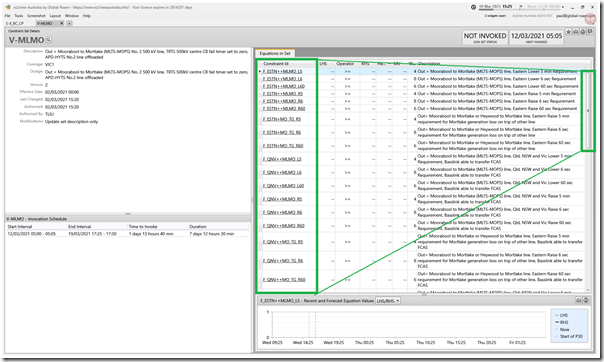 We can see that this one, the ‘V-MLMO’ Constraint Set, relates to ‘[outage on the] Moorabool to Mortlake (MLTS-MOPS) No. 2 500 kV line, TRTS 500kV centre CB fail timer set to zero, APD-HYTS No.2 line offloaded’ … and the constraint equations contained help to give effect to what’s noted above in the Market Notice about FCAS support.

In tomorrow’s talk by Marcelle Gannon (for those who are listening) watch out for numbers that will help to reveal the scale of the cost of that outage for South Australian generators in their full year results for calendar 2020!

In an AEMO information call today there were other questions asked about this planned network outage, as a result of which the following prior information from AEMO was mentioned.

I’ve copied it in here as a service to those WattClarity readers who are interested:

On 31 January 2020, there was a collapse of a number of steel transmission towers on the double circuit Moorabool – Mortlake and Moorabool – Haunted Gully 500 kV lines (MLTS-MOPS and MLTS-HGTS lines). This was due to a severe convective downburst during thunderstorm activity. This resulted in the separation of the Mortlake Power Station, the APD Portland aluminium smelter and South Australia from the rest of the NEM for 17 days.

Both circuits were restored using temporary structures. Outages are now required to return the circuits to the rebuilt permanent structures.

During each of these two outages there will be no recall. If significant issues occur during the early stages of one of the outages, then work will be reversed to restore the circuits to their original condition. If the issues occur in the later stages of the outage, then work will continue so that the circuit will be restored in its new arrangement.

In the interim AEMO will take action, including directions, to maintain system security, reliability and supply.

At this stage, these outages are currently proposed as follows:

Risks associated with these outages

• Islanding of the South Australian Region

• Interruption of supply to the Alcoa Portland Smelter

• Disconnection of some local generation from the system

o For the MLTS-HGTS circuit this will be Mortlake PS and Dundonnell and Portland wind farms.

o For the MLTS- MOPS circuit this will be Macarthur, Stockyard Hill and Portland wind farms.

These risks will be managed by:

• An assessment process (as detailed below) to ensure that an outage will not proceed if power system security issues are forecast;

• A contingency plan which will reduce, to some extent, the risk of prolonged interruption to the Portland Smelter; and

Challenges presented by these outages

There are a number of requirements that need to be met to maintain system security during these outages and to ensure that system security can be restored for the extended SA Island following a credible contingency:

• to manage the largest allowable generator contingencies when islanded (including likely loss of rooftop PV); and

These are becoming increasingly demanding due to the continued growth in rooftop solar capacity in SA. AEMO is working with SAPN and ElectraNet to manage these challenges.

Impact of these planned outages

The impact of these planned outages on generation (excluding impact if a contingency event occurred) is as follows:

• Victoria to South Australia transfer on the Heywood interconnector will be limited up to 50 MW.

• South Australia to Victoria transfer on the Heywood interconnector transfer will be limited up to 250 MW.

• Macarthur wind farm will be constrained to zero MW.

• Stockyard Hill windfarm may also need to be constrained to 0 MW .

• Victoria to South Australia transfer on Heywood interconnector is up to 250 MW in both directions. In addition:

 When Mortlake + Dundonnell are not generating:

○ VIC-SA Heywood interconnector transfer should be limited up to 50 MW.

• Mortlake power station and Dundonnell wind farm will be constrained, to manage Heywood interconnector flow (as shown above)

• Stockyard Hill wind farm will be constrained to 0 MW.

• Macarthur wind farm will be unconstrained.

Risks to the timeframe:

• Weather – Due to crane work and worker safety, AusNet may only work during suitable weather conditions. During times of strong winds and lightning storms there may be a delay to the work program.

• Any system security issues that may arise which may cause a delay to the outages.

1. Short term timeframe assessment – this will be conducted on Friday 4 December. A conditional approval is likely to be given at this stage requiring certain outstanding issues to be resolved before the outage can proceed.

2. Pre-Dispatch time frame assessment – this will be conducted during PM Saturday 5 December to identify any changes in system conditions that have occurred since the short-term assessment was completed.

3. Final assessment will be conducted on the afternoon of Sunday 6 December to determine whether or not permission to proceed on this outage will be granted by AEMO.

A similar process will be followed for the second outage, currently planned to commence on 13 December.

Permission to proceed will not be granted for an outage if forecasts at the time of assessment indicate that this outage would, at any point over its duration, result in:

• a failure to meet system security requirements (in particular the requirements previously outlined for SA island operation) after taking into account any directions that would be required regardless of whether this outage proceeds or not.

Each of the two outages will be assessed separately.

A review of current forecasts for the initial outlook period during the first outage (MLTS-HGTS) indicates that not all conditions that will be required under the assessment will be met. However, this may change over the next two days.

Any changes or updates related to outages can be found on the AEMO website at:

A short note about the release, earlier this week, by the AEMO of the ‘Initial Roadmap’ in the NEM Engineering Framework.