A short note at the end of a busy week, to note that on Monday 22nd February we saw the release of this 61-page report ‘Fast Erosion of Coal Plant Profits in the National Electricity Market’ published by Green Energy Markets (including occasional guest author, Tristan Edis) and the Institute for Energy Economics and Financial Analysis (IEEFA): 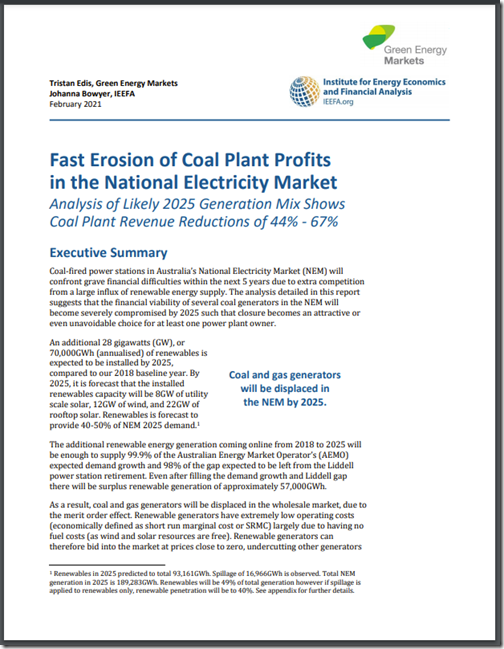 Particularly telling in the report was a section titled ‘The Coming Tidal Wave of New Solar and Wind Supply’, with the premise being that there’s a lot of it at various stages of development, and that it would push out coal more quickly than some expect (i.e. in the officially stated scheduled retirement dates).

I’ve posted this here today to ensure that WattClarity® readers are all aware that it was published – but also because it’s likely we’ll be referring back to this in later articles.

As has been our process for the past 6+ months, we’ve tagged any third party coverage we’ve seen of this report in our expanding Asset Catalog, so those who have access can see the fuller list there – however worth flagging just a few things we have noticed:

We saw Adam Morton write how ‘Renewable energy could render five of Australia’s remaining coal plants unviable by 2025’ in the Guardian.

In RenewEconomy, Michael Mazengarb wrote that a ‘Tidal wave of new wind and solar will force early plant closures’.

In the AFR, Elouise Fowler and Peter Ker wrote how ‘Up to five coal plants unprofitable by 2025’.

Even Alan Kohler was in on the action noting ‘Australia’s solar tsunami to trigger coal collapse’ in The New Daily.

It was not only in the established media brands, however – for instance we also noticed that  Steph Byrom wrote ‘There’s more to the grid than just electricity’ on LinkedIn.

So on Friday 26th February:

I guess you could add this short note on WattClarity as another reference!

The ‘tsunami’ and ‘tidal wave’ theme from within the report was clearly picked up on some of the articles above.

All of the above (and more in the Asset Catalog) are listed not because we agree (or disagree) with any particular perspective, but as a general service to our readers – in the same way as we have done before.  In everything we do, we strive to make complexity understandable – so people can make (their own) better decisions.

For a number of reasons I was not really surprised that we have fielded a number of questions from WattClarity readers this week which might be summed up with the general question ‘how credible is this modelling?’.

1)  Readers should keep in mind that I’ve previously written how ‘Forecasting is a mug’s game’ (which others have probably put, more helpfully, along the lines of ‘all forecasts are wrong, but some can be useful’).   Long-time readers might also remember that I did provide a ‘Forecasts, of sorts, for the NEM‘ back in mid 2017 for the Clean Energy Council.

2)  I’m also cognisant that we’re in a somewhat unique position, perhaps, having cranked up ‘BEAST’ again to produce the ‘Generator Statistical Digest 2020’ update released at the start of this month, which:
(a)  took a detailed look at 2020 unit performance;
(b)  as part of a review of 10-year operations for all DUIDs operational through 2020.
… all of which could help to explore the question ‘how have coal, solar and wind units actually been performing?’

3)  Following from this release, we (in conjunction with Jonathon Dyson and his team at GVSC) are thinking more seriously about completing the work to update our well-received 180-page analytical component in the GRC2018 with a  Generator Report Card 2020  (release perhaps late July 2021).
(a)  Were this to happen, it would definitely include a detailed consideration to topic of ‘the End of Coal’.
(b)  Again, in doing this (as in everything we do) we’d not be producing our own forecasts, but instead saying ‘how can changes in historical performance help inform a view of the future?’

With all of this in mind, it’s possible that we might find some time to use historical data to explore that headline question about this weeks release.

Quick preliminary thoughts on the reported mothballing of capacity at Swanbank E and the return of two units at Tarong.