Amongst the conversations that were kicked along yesterday with the coincident trip of both units at Callide C in central QLD were two that particularly caught my attention:

Conversation #1 was sparked, in part, by this question by an anonymous reader at WattClarity, asking about the processes AEMO uses to determine when to issue Market Notices after market events.

Conversation #2 was sparked by  Mike Davidson’s addition to Stuart Banks’ note on LinkedIn about the price movement seen around the middle of the day yesterday across all regions.

In a way, both conversations are tied together as we will see…

Mike Davidson showed one depiction of a surprise jump in Operational Demand, so I took a look at the same with the ‘Forecast Convergence’ widget inside of ez2view and would include a couple snapshots here to illustrate.

Firstly there is a graphical depiction (using the AEMO’s ‘Demand and Non-Scheduled Generation’ figures) to show what amounts to a ~500MW jump in demand compared to expectations, happening rapidly and out of the blue: 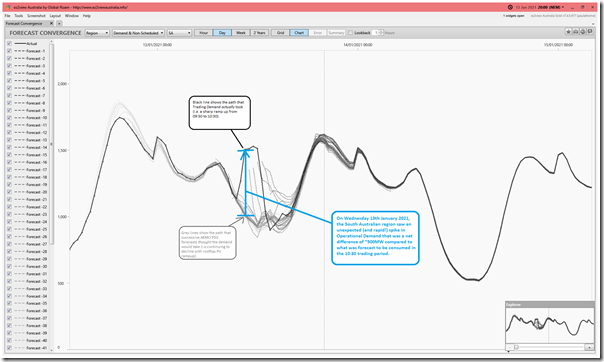 To put this in relative terms (which is important to understand, in terms of market impacts) the actual Demand-and-NSG number for the 10:30 trading period was 1,506MW … whereas the expectation less than an hour beforehand was that it would be 1,042MW.   That’s 45% higher!

With ‘Forecast Convergence’ in ez2view we can flip to a tabular view, which is what we see below: 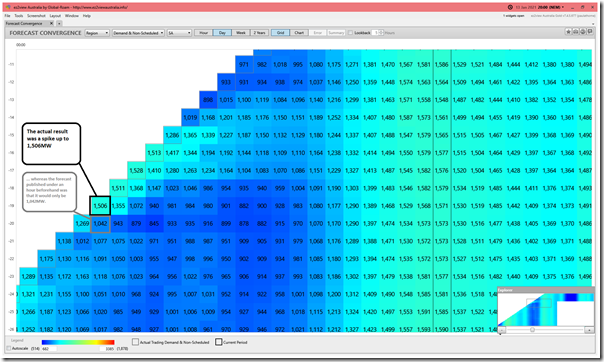 Now, frequent readers will remember that this measure might be loosely termed as ‘Grid Demand’, which is different to (i.e. lower than) what a layperson might think of as ‘Underlying Demand’ (because an increasing amount of this Underlying Demand is being met by supply from embedded generation – primarily rooftop PV).

(A1)  Market Impacts of this surprise jump in Grid Demand

Flipping the tabular view in ‘Forecast Convergence’ in ez2view to look at Trading Price rather than Demand, we see that the price spiked significantly higher than expectations as a result of the unexpected and rapid ramp in demand on the grid: 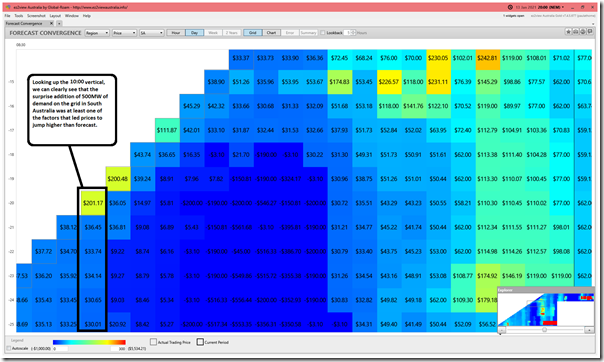 Included in the Trading Prices for the 10:00 and 10:30 trading periods were spikes in the 10:00 and 10:05 dispatch intervals to $1,015.13/MWh … which indicates, further, that the spike in demand was really out of the blue.  Here’s a snapshot automatically captured from a display copy of NEMwatch v10 that we have running in our office: 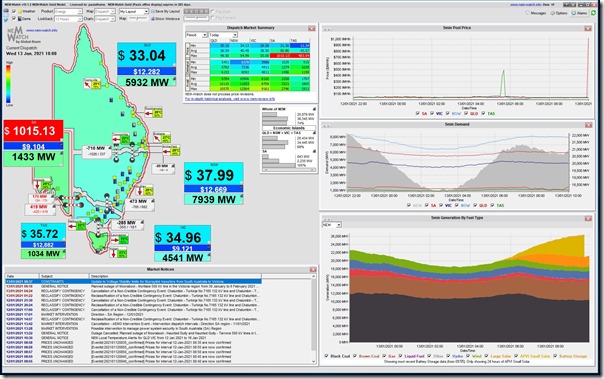 (A2)  Probable cause(s?) of this sudden ramp in Grid Demand

As alluded to above, ‘Grid Demand’ is essentially what’s left (i.e. to be supplied from the grid) after Embedded Generation (mainly rooftop PV) meets its own share of ‘Underlying Demand’.

The AEMO has previously published papers outlining some concerns about what might happen when Grid Demand approaches zero due to the ongoing rise of rooftop PV, such as:

So we can understand that a sudden and unforecast steep drop in rooftop PV production would have led to an equivalent ramp in Grid Demand.

Remembering that the contribution of rooftop PV is not actually metered but rather estimated (by different methods) or inferred (from its impact on Grid Demand) I’ve included two different estimates (from the AEMO and the APVI) in the following trend from NEMreview v7: 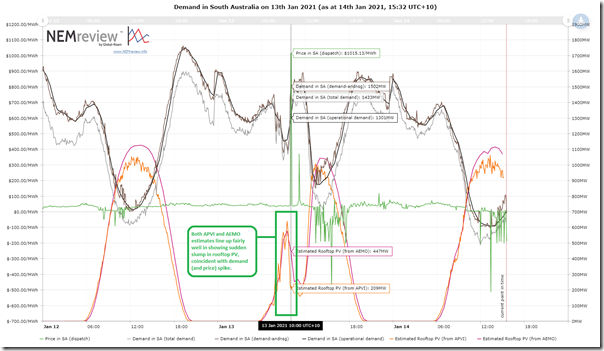 In ‘Forecast Convergence’ in ez2view we are also able to look at Unit Targets, as received by AEMO, and compare them to prior expectations.  There are not (yet!) many Large Solar Farms in South Australia, but here is the view of how they collectively also surprised on the downside.  This will also have been reflected in the price spikes above. 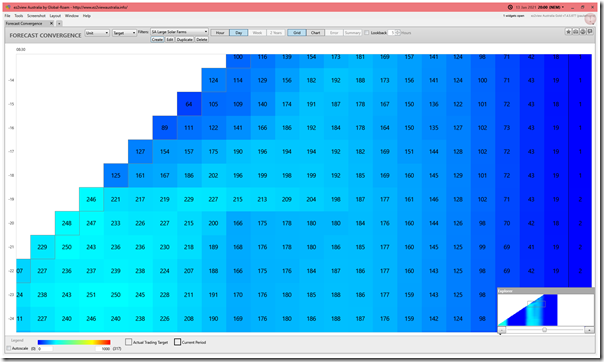 This view tends to support the conclusion that it was rooftop PV that curtailed sharply, driving Grid Demand higher.

However it’s also worth noting that (if there was a large enough cloud bank crossing over Adelaide, deep and dark enough to snuff out most of the production of rooftop PV in a short space of time) that there might have been a small amount of the increase in consumption associated with increasing lighting load?

I appreciated the discussion that ensued offline, following the coincident trip of both units at Callide C yesterday.

As noted in response to the question on WattClarity yesterday, the AEMO issued the Market Notice following the because it was a  “non-credible contingency”, not because of the level of the frequency nadir.

Power stations are typically designed to not have common points of failure across units, hence:

1)  One unit tripping (N-1) is seen as “credible” … in that it’s expected that this will happen from time to time, even if we don’t necessarily like it when it happens.  As Hugh Saddler noted, (unit) ‘trips are normal’.

2)  However two units tripping at the same time (N-2) is seen as “non-credible” … or, in other words, not normally expected.   This event will trigger an investigation to ensure its cause is understood and not repeated.

One of the more learned NEM junkies yesterday reminded me about the AEMO’s “Power System Security Guidelines’ (SO_OP_3715): 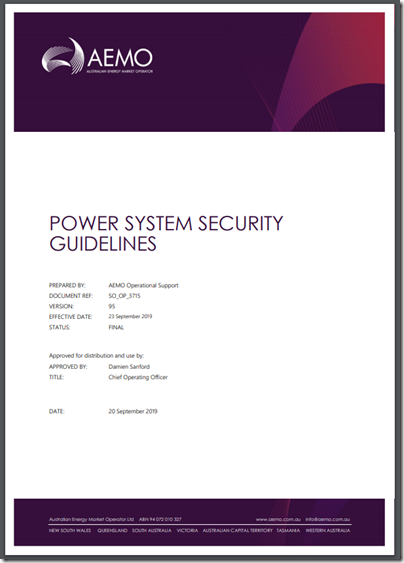 … and particularly section 7.2 which notes:

• The trip of any busbar in the transmission network

• The trip of more than one transmission element

• The trip of transmission plant in a manner that is not normal (e.g. protection operated but did not isolate the plant as per design)

• The trip of multiple generating units

• A combination of transmission plant, scheduled generating units or load, where that combination is not normally considered likely”

(B3)  Market impacts of something being considered ‘credible’

They are not just weasel words … ‘credible’ and ‘non-credible’.  There are real market (i.e. cost to energy user) impacts when certain market events are formally considered credible events.

These will be seen, for instance, in the outcome of what happened with Callide C yesterday – such as in Market Notice 82140 today in which AEMO says:

AEMO did not instruct load shedding.

AEMO has not been advised of any disconnection of bulk electrical load.

The cause of this non credible contingency event is not known at this stage.

AEMO is not satisfied that this non credible event is unlikely to re-occur.

AEMO has therefore reclassified this event as a credible contingency event from 1125 hrs 14/01/2021 until further notice.

Constraint set contains the following interconnectors on the left hand side.

A quick reference to Constraint Set ‘Q-CALLIDE_CPP_N-2’  in ez2view today shows 9 different constraint equations invoked in the set, each of which will have an impact on market outcomes: 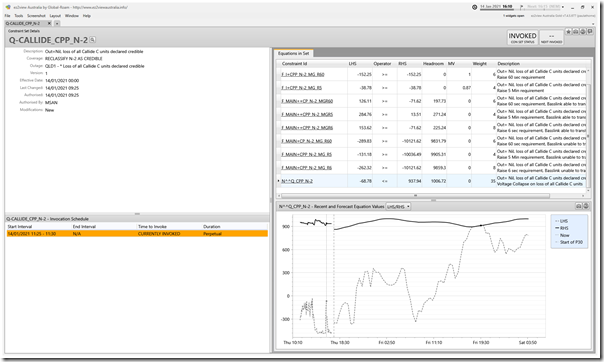 When we were collaborating with the GVSC team 2 years ago to prepare the Generator Report Card 2018, we made sure that we included a specific focus on how the NEM is becoming increasingly dependent on the weather:

This was discussed in Theme 6 within Part 2 of the 180-page analytical component inside of the GRC2018.  Should we find time to repeat the mammoth process again this year to produce an update in the form of the Generator Report Card 2020, we will seek to extend these thoughts further.

It’s interesting to note that the difference in approach taken by the AEMO between the two events yesterday, and the questions this throws up about the way management of the grid (and the market) will need to change over time as this energy transition rolls on:

Event #1)  We have a coincident trip of both units at Callide C which delivered, via an ~800MW loss of supply, a drop in frequency (though no large spike in price at the time) that’s now seen as a credible contingency so will, at times, add to the cost of dispatching the market because the constraint equations cater for it.

Event #2)  We have a significant (~500MW) net loss of supply from rooftop PV, plus some from large solar as well, that did deliver a price spike … and which might be expected to increase in scale in the years ahead as the rooftop PV juggernaut continues its progress.  However that possibility is not being (explicitly?) catered for in the operating processes as its own type of “credible contingency”?

Coincidentally this morning I noticed that the California ISO had published its ’FINAL – Root Cause Analysis (Mid-August 2020 Extreme Heat Wave)’: 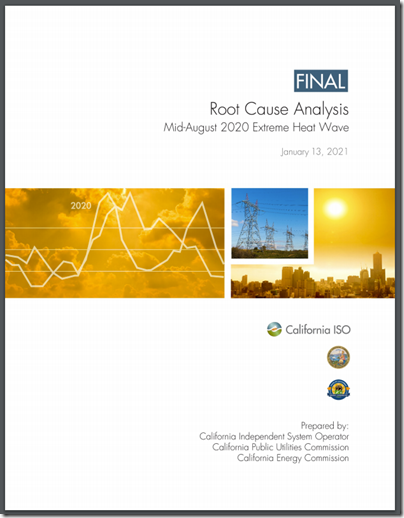 Quickly scanning the 143 page report, there were a number of things that jumped out, but particularly these two from a “Summary of Performance of Different Types of Resources” (numbered p5):

Observation #1)  Echoing the considerations in my other article from yesterday, I read the following:

“Natural gas – Under very high temperatures, ambient derates are not uncommon for the natural gas fleet, and high temperatures reduce the efficiency of these resources. The CEC hosted a workshop to explore potential technology options for increasing the efficiency and flexibility of the existing natural gas power plant fleet to help meet near-term electric system reliability and the longer-term transition to renewable and zero-carbon resources.1 Subsequently, the CPUC issued a ruling intended to get the most out the existing gas fleet in its recently opened procurement rulemaking focused on summer 2021 resources.2 All reasonable efforts should be made to increase the efficiency of the existing fleet.”

Observation #2)  Broadly related to (though not identical to) the problem that AEMO experienced yesterday with the disappearance of solar PV contributions (small rooftop PV and large solar farms):

To my reading, this comment from CALISO speaks to both:

2a)  The (relatively low) performance of this type of technology at times of ‘net peak’ demand; but also

2b)  The degree to to which the performance is predictable ahead of time … which is the same type of challenge the AEMO was grappling with on Wednesday this week (albeit not at ‘net peak’ demand times).

Fun times ahead, everywhere around the world that’s transitioning with increasing contributions of intermittent generation in a world where temperatures are rising…

Worth noting that there are also conversations this has spawned here on LinkedIn (and this spin-off started by James Luffman) that you might like to keep an eye on, and also a couple questions and comments popping up on Twitter here and possibly here as well.

Winding down through Beer O’clock at the end of a long week with the team and the buzzing of my phone distracts to a few successive price spikes this afternoon in the NSW Region: Here’s a snapshot of the 16:00…

Limondale Solar Farm starts up – only the first 29MW component of a bigger planned station?

Merry Christmas to Innogy, with first operations seen at the first phase of the Limondale Solar Farm

4 Comments on "Yesterday’s unexpected loss of ~500MW of rooftop PV in South Australia (another type of Contingency event – Credible, or Non-Credible?)"