Posted by Paul McArdle Monday, May 3 2021 Topic: A collection of some core analytical challenges, Energy Transition

Perhaps there is something big that I am missing (if you can see where it is, please do let me know!) … but it does seem that there is an almost visible aura of unresolved cognitive dissonance washing across the NEM in recent times.

Only this morning I saw Mark Ludlow from the FinReview quip the following: 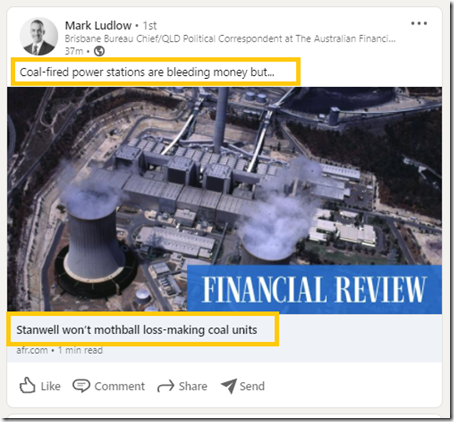 … and whilst the case of Stanwell CEO (it seems, to me and to others – though maybe we’re all missing something big?!) being moved aside for stating the bleeding obvious is quite obvious to poke* holes at, it’s far from the only example…

*  for instance, I also did quip about the potential Position Description for his replacement as CEO.

(A)  Suspending Logic and Reason?

In addition to a very banana-bender version of ‘squaring the circle’, we have the super-secret financial support being provided by the Victorian Government to EnergyAustralia to ensure that the Yallourn station remains open until its (somewhat earlier) retirement date of 2028.

More generally, though, there’s been a degree of hyperventilation that’s followed on from the ESB noting in their Options Paper just last week about some form of broader ‘capacity payments’ (see this article from 2015).

Though there is some mystery surrounding the departure of Brett Redman as CEO from AGL Energy, I wonder what the Board’s view would have been had Brett’s preference would have been to run what might be named as NewSexyGreenCo, and not the unwanted sibling the OldCrapAndUnSexyButStillEarningTheRevenueCo?

… and, of course, there is Angus Taylor’s ongoing crusade to build a gas-fired generator at Kurri Kurri.  Since it was added into our Asset Catalog as a specific prospective project it’s been tagged with reference in 85 discrete news articles (a few more to add this week, no doubt).

Thankfully talk of a HELE coal plant at Collinsville (not the place you really need to build anything, let alone coal) seems to have gone the way of the dodo.

It’s almost as if we’ve reached the point where more people are recognising what we wrote about in the GRC2018 … that the methods that have been used to support entry of new supply options have been (in some ways) hindering, and not supporting, the energy transition.

As announced on 20th April 2021, we’ve* commenced the massive analytical exercise that is the compilation of the follow-on to the (very well received) Generator Report Card 2018 report, released 2 years ago now.

We’re enjoying the ability to deeply explore some of the issues and challenges apparent in what’s been happening recently (not being commissioned by any particular stakeholder), and look forward to having ‘Generator Insights 2021’ released sometime in Q3 2021.

* Readers should be clear that the ‘we’ here is much more than our team at Global-Roam Pty Ltd :
(a)   the GenInsights21 release is being co-developed with Jonathon Dyson’s team at Greenview Strategic Consulting
(b)  and also with the assistance of a growing number of external analysts who we see deliver useful independent perspectives …  that can help to provide a broad, and a deep, piece of analysis that confronts many of the challenges in this energy transition head-on (using detailed analysis of 22 years of NEM history to identify what we can learn).
(c)  so please do let us know if you know of others who could also help us deliver an even-more-useful piece of analysis!

Don’t forget the opportunity to send in your pre-order today to secure your discounted access to the final copy, when it is released.

(B)  How mothballing was done in the past…

In today’s article that Mark links to above  he wrote (with respect to mothballing):

Stanwell did the same thing with its Tarong power station in 2013-14 – when wholesale prices were also low – helping to reduce their fixed costs. The unit was then brought back online a year later when the Swanbank E power station was closed.

Flipping open our electronic copy of the Generator Statistical Digest 2020 onto the 10-year historical view that’s part of the ‘A’ Page supplied for each unit, we can quickly see what Mark is talking about:

Here’s the top half of the ‘A’ page for Tarong unit 1: 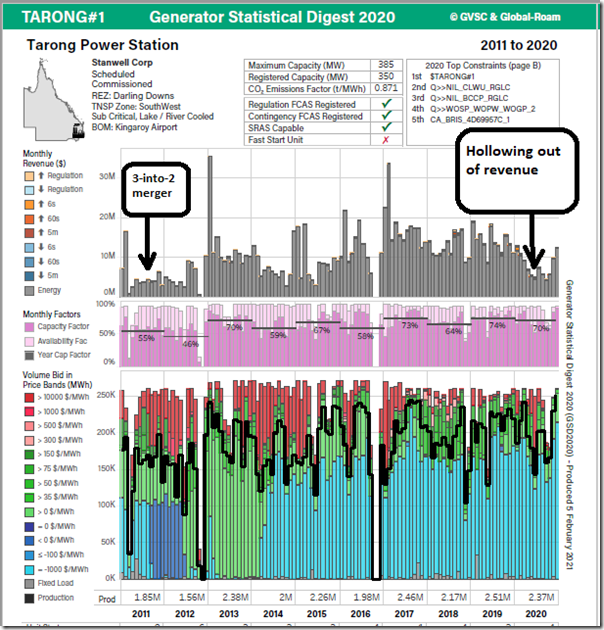 We can see a period of healthy revenues, in historical terms, from 2017 to 2019 (approx) but 2020 revenues being hollowed out – not least because of the rise in negative pricing due to waves of new capacity being induced to enter the daylight periods of the market.  Almost exactly 10 years ago today the QLD government engineered a ‘3 into 2 merger’ across its GenCos to address struggling revenues … which led to the ability to mothball two units at Tarong (amongst other initiatives) as we will see below…

Here’s the same page for unit 2, showing the 3-year-long period during which it was mothballed: 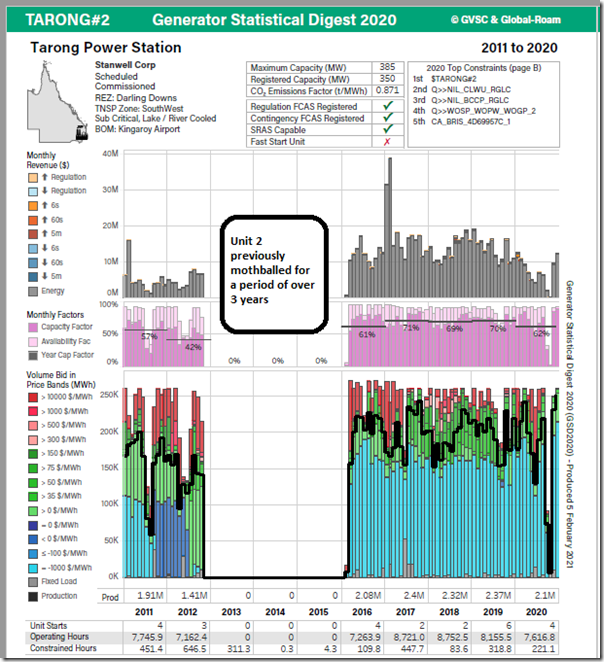 As noted back in 2017, the 3-into-2 merger was one of the 3 main reasons why QLD spot prices rose in the period since that time. 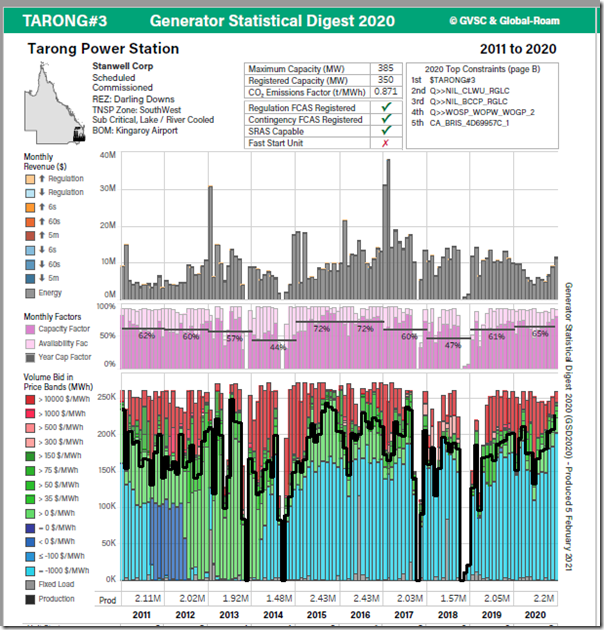 Here’s unit 4, which was mothballed for only ~18 months: 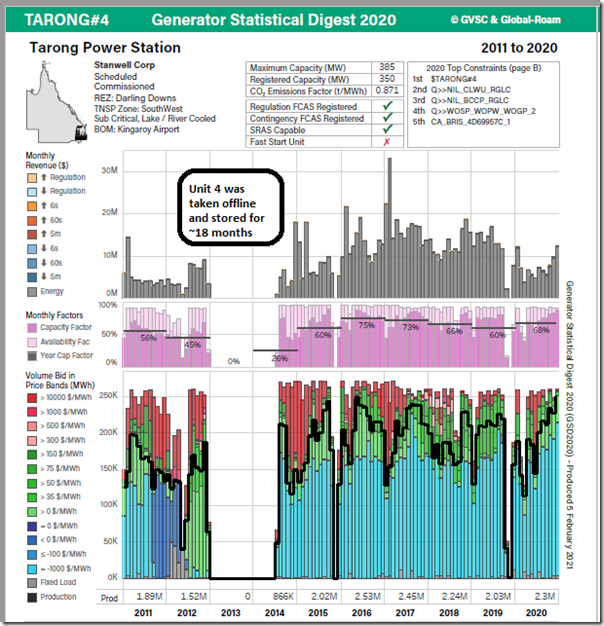 Given that Mark also mentioned Swanbank E in his news article, I have added this in for some context for the readers: 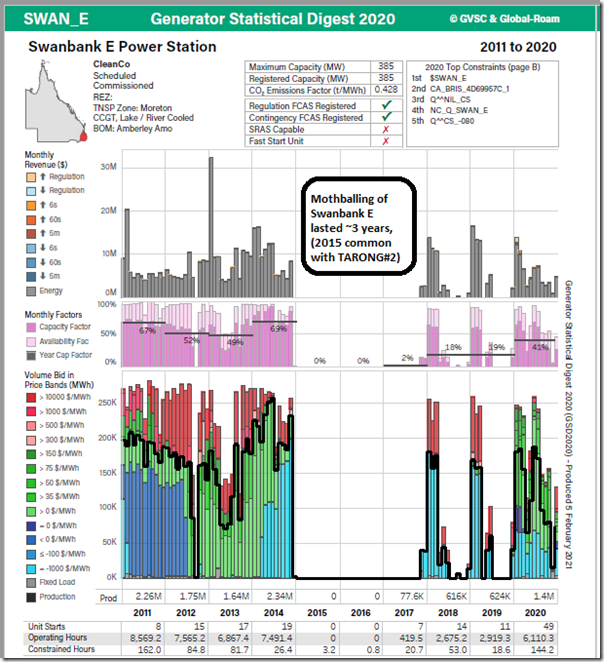 Given that the (newly merged) Stanwell Corporation used mothballing as a tactic back in 2013 to confront precarious profitability (amongst other approaches), it seems entirely logical that they would have been thinking of doing the same to confront the pain coming down the pipeline at them as the energy transition continues.

Of course, given the accelerating energy transition (which the QLD Government is helping to sponsor with it’s own challenging 50% renewables target), it seems quite plausible that some units would never return  (the seasonal closures for Northern Power Station in SA did not ensure longevity).

Very strange that (it seems on this occasion – unless I am missing something big?!) that this has already been ruled out as an option this time?!

8 Comments on "Mothballing logic, and reason?"