We’re now well into Q2 2021 and (as announced here 11 days ago) we’re well on the way to completing some aspects of our up-coming GenInsights21 release.

(for those who wish to save on their access to GenInsights21 when it is released, you can pre-order today).

We’d commenced the work well before the ESB released its Options Paper for post 2025 design, but the quick skim I have conducted reinforces the importance of one of the Appendices we have coming together now – and that is with respect to the degree of correlation in wind production patterns across the NEM.

Quite topical, then, to look up on our (NEMwatch and ez2view) dashboards during the past week to see a consistent pattern – overlaid on top of the typical 24-36 hour cycle of output was a more pronounced stillness that speaks to what we had gone some way to analyse for the GRC2018, and which we are extending much further for GenInsights21.

Here’s a view (using this query) from NEMreview v7  that shows an aggregate NEM-wide view of what happened: 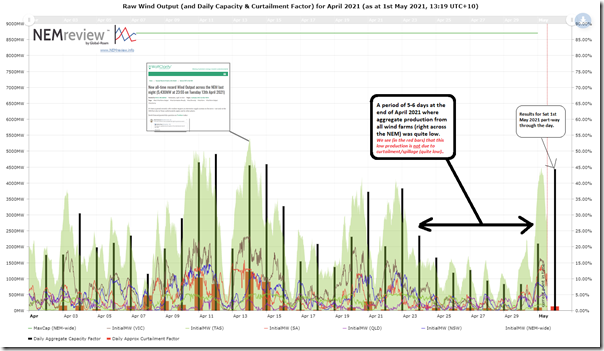 We can see that total installed capacity is up at 8,703MW currently – and that (along the lines of that ‘yin-and-yang’ animation from way back in 2015) there were both highs and lows in the month:

A1)  The high points

On a daily aggregate basis, some days saw daily Capacity Factors approaching 50%, which seems to be a pretty impressive yield in historical terms (especially when also considering that those days also typically saw something like an additional 10% of possible harvest spilled* in response to a combination of factors:

Spillage Factor #1 = negative prices, in which cases some wind farms switch off to avoid paying to generate:

(a)  Some wind farms (such as those which cost AGL a write-down a staggering $1.9 billion) have legacy contracts in place, so don’t care about the spot price and run straight through

(b)  Other wind farms that are Non-Scheduled just switch off automatically to avoid the negative price with no need to advise the AEMO (Allan’s analysis of Easter Saturday 2020 here showed an example), which presents the AEMO with its own challenges as the incidence of negative prices increases.

(c)  Other wind farms that are Semi-Scheduled that want to switch off must only do this through bidding behaviour (following recent passage of a Rule Change that follows the AER’s request).

Spillage Factor #2 = constraints (with some of the factors explored in this historical record inspired by the GSD2020).

Caveat (*) on the estimate of spillage – readers are reminded of Marcelle’s warning that it’s ‘not as simple as it appears’ to estimate curtailment of renewable generation.

In the same month of these high points, we see that there was a 5-6 day period in the week that’s just passed where wind output significantly disappeared right across the NEM (this had been noted by a number of people I’d spoken with during the week, and I gather this had something to do with a high pressure system in the southern part of the NEM … but I am definitely not a meteorologist!).

1)  There were 5 consecutive calendar days with the NEM-wide daily Capacity Factor less than 15% (and with 3 of these days being under 10%).  That’s only 20-25% of what was delivered on those strong harvest days noted above, if we assume we add back in the curtailment noted above.

2)  As we can also see in the chart, there was negligible curtailment seen during this period, so it does seem to be mostly because of poor wind conditions.

3)  Furthermore, it’s fairly easy to see (from the regional trends in the chart) that output suffered across SA, VIC, TAS and NSW.

4)  Because QLD only has 2 wind farms operating at present, the aggregate consumption is small in absolute terms, so difficult to see from this chart.

(b)  There was some curtailment on the Monday 26th April (at least in part due to negative prices – did not check constraint activity), but there was none on Sunday 25th April.

(c)  So it seems probable that (in this instance) more installed capacity of wind in QLD would have delivered higher NEM-wide capacity factor for much of the 5-6 day period … notwithstanding possible spillage.

(d)  Working with this hypothetical case and mentally projecting forwards (not even to the point of ‘back of envelope’), the additional harvest possible in QLD would mean a number of things including:

i.  The need for a sufficiently robust grid to ensure delivery of the power where it needs to be;

ii.  Not much change to the MW capacity required in dispatchable plant (because of low harvest on 25th April) compared to a ‘no steeper expansion in QLD’ assumption; but

iii.  Lower MWh energy stored requirement, because of only one ‘lowest harvest’ day to get through, rather than five in a row.

(B)  What have we already done

Two years ago, when we released the inaugural Generator Report Card 2018 (a very well received combination of Analysis and Statistics) we included an exploration of the challenge that is ‘when the sun does not shine and wind does not blow’: 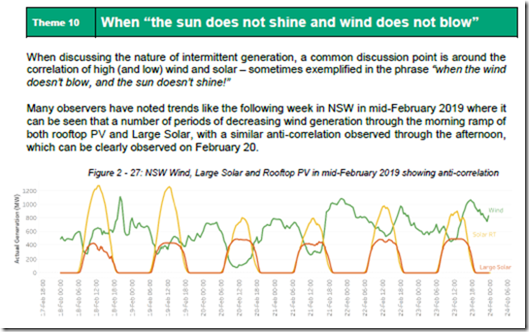 We did this in Theme 10 within Part 2 of the 180-page analytical component within the GRC2018.

Two months after the release, we freely shared here one of the figures presented in the GRC2018 that summed up one of the central tenets behind that piece of the analysis:

1)  Our sense has been that a significant number of people (when thinking about diversity of wind harvest) think about this only as a continuum between two states (i.e. highly correlated, and random).

2)  However it is clear to us that it is the third state that is required to deliver any meaningful capacity benefit (i.e. to the market as a whole) from a deployment of wind farms across the NEM.

(a)  Some of the discussion I’ve seen in the 36 hours that has followed from the release of the ESB’s Option paper has centred around statements about the need for 19GW of dispatchable capacity (i.e. over and above the capacity of wind and solar to be deployed in this energy transition).

i.  On the basis of what we did for the GRC2018, and what I have observed in the market since that time (including in the prior week) makes me to wonder is that (already large) amount of capacity going to actually be enough?

ii.  A key aspect of determining just how much will be required is understanding the objective reality of the diversity patterns that we can expect in a NEM with significantly higher penetrations of wind farms.  Perhaps what is being presented in many quarters, to date, has been ‘sunny days’ predictions that don’t properly factor in High Impact (relatively) Low Probability events?

(b)  Anti-correlation would also be one factor supporting much better individual project economics as well (as Marcelle showed here for one particular example with Bald Hills Wind Farm).

We returned to this theme in May 2020 to note how ‘diversity is not a magic wand’ – and reiterated on 14th April when we saw peak instantaneous wind output right across the NEM.

(C)  How are we extending this, for GenInsights21?

On page 14 of the ESB’s Option paper it is written:

This means there is a need for 6-19 GW of new utility scale, flexible and dispatchable resources, as up to 63% of the current coal and gas fleet in the NEM) retires by 2040.  To put these numbers into perspective, the average NEM demand is around 20 GW.

Given the criticality of our collective understanding of the size of this requirement, and ensuring we have a means for incentivising the capacity of this size (and the right performance characteristics) to enter the market, it seems quite important that what we’d delivered in the GRC2018 be subsequently extended to provide a deeper insight.

(a)  but we have not really seen anyone take what we did back then and extend it further, which does concern us.

(b)  Did we miss something?

2)  Given we see this as quite important, we have had an analytical exercise running now since the start of the year (with results to be published in GenInsights21) to extend this analysis in order to understand:

(a)  What would diversity patterns be of MWh harvest (as distinct from wind speeds) assuming full deployment of wind farms across the NEM … and even further afield?

(b)  What are the extent of the ‘wind droughts’ that 16 years of history have shown we can reasonably expect to occur in the future?

i.  What are their duration, and depth?

ii.  How do they correlate to consumption shapes (i.e. what would be the ‘net energy’ required from dispatchable resources)?

(c)  If that ‘net energy’ were to be substantially supplied from plant that is also itself energy-constrained, what is the shape of the storage required (i.e. GW and GWh)?

i.  batteries and hydro are perhaps more obvious in this energy constraint,

ii.  however gas and liquid fuelled plant can also have energy constraints in terms of accessible fuel supplies – as the outcomes from Texas showed us earlier this year.

(d)  In a separate appendix in GenInsights21 we are also looking to explore what history has shown us in terms of the ‘predictability’ of wind harvest (this piece is not as far advanced at this point).

We’ll look forward to sharing with clients when GenInsights21 is ready.  Don’t forget to send in your pre-order today, and save on the final release price.

With increasing diversity, the low point of instantaneous aggregate Wind Generation across the NEM is nudging away from 0MW

Patricia Boyce’ challenging question coincided with the low point of cyclic wind output across the NEM this afternoon, and prompted some thinking…

8 Comments on "Where’d the wind go, during the last week of April?"