Last week (on Thursday 19th May 2022) I was invited to speak at the CEC’s Large-Scale Solar Forum for 2022 with Oliver Nunn and Lachlan McLeod in a session chaired by Scott Partlin and titled ‘Bang for your buck – operating in the NEM for maximum revenue’: 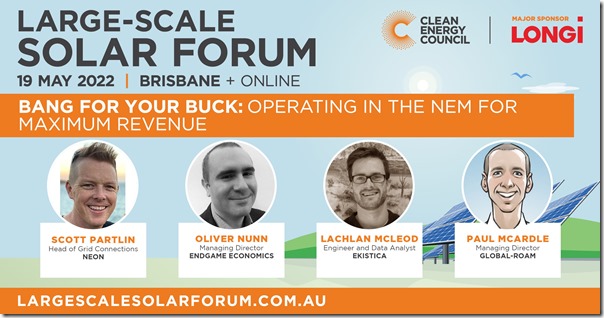 I promised to post more information in a WattClarity article or two at the time – and, though I don’t have enough time to post everything this evening, I thought I’d start with this overview.

The overview for the session stated:

‘The constantly changing generation profile of the National Electricity Market (NEM) means that large-scale solar projects need to be nimble to ensure they can continue to get maximum value from their assets. This session will look at some of the things that could affect a large-scale solar project’s value proposition, including the curtailment of generation, the growing role of storage and the potential introduction of a congestion management mechanism.’

… and, to me, it seemed important to draw a distinction between the (seemingly narrower) focus on ‘Revenue’ in the session title and the broader focus on ‘Value’ in the synopsis.

As I noted on Thursday, at least neither was referencing ‘cost’ – given I’d written in December 2018 how too much focus on COST, and not enough on VALUE was Villain #5c (and it’s certainly an improvement on talking about LCOE … a very over-used metric)! 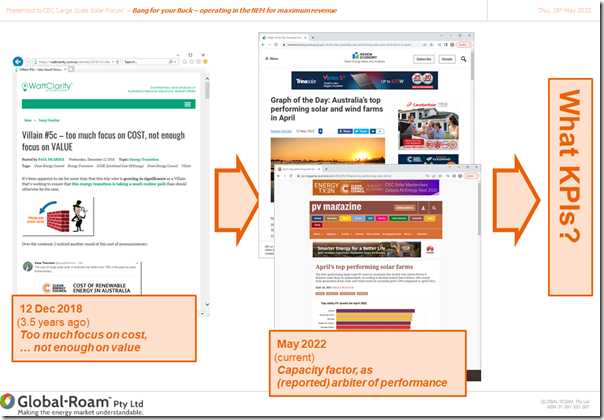 I also noted how in recent times it had seemed that plant capacity factor had also been seen to be a form of arbiter of level of performance and value…. but again that metric (on its own) is quite simplistic.

So I resolved to report on several different performance metrics that might (collectively) give a more robust measure of Value … both with respect to the recent past, but also clues to what might happen in the months and years ahead.

Thankfully, given we’d released the GSD2021 in March 2022 and the GenInsights21 analytical report in December 2021, we have plenty of statistics to draw from …

(B1)  Metrics based on Revenue, and Gross Profit.

In the Generator Statistical Digest 2021, we provide two pages of statistics for every individual DUID that was operation in the ENERGY market through at least some point of calendar 2021 – including all of the Large Solar Farms (both Non-Scheduled and Semi-Scheduled).   On the ‘A’ Pages for each DUID we presented monthly revenue – for ENERGY and each of the 8 x FCAS commodities supplied by each particular DUID.

On Thursday I was above to walk through a number of different League Tables, ranking all the Solar Farm DUIDs operational through at least part of 2021 by several different revenue-based metrics:

(a)  I don’t have time to post more this evening

(b)  That will come in a later article, but I will link it back in here for context when it is live.

(B2)  Other Metrics, not based on Revenue

To follow on from a number of different perspectives of revenue-based metrics, I also posed the question – is Revenue the only measure of Value?

What if there are other measures of value (such as the degree to which your particular solar farm makes the AEMO’s and AER’s lives easier) which could be assessed and compared, in order to provide some indication of the potential risk of future hiccups that might derail operations as the energy transition continues to pick up speed.

On Thursday I was above to walk through a number of different League Tables, ranking all the Solar Farm DUIDs operational through at least part of 2021 by several different metrics like this (i.e. not based on revenue):

(a)  Again, I don’t have time to post more this evening

(b)  Again, that will come in a later article, but I will link it back in here for context when it is live.

Announcing development of ‘Generator Insights 2021’, and inviting your pre-order

As alluded to in several recent articles, we have underway a process for updating the ~180 page analytical component included in the Generator Report Card 2018 (released 23 months ago now). We are targeting a release of ‘Generator Insights 2021’ in Q3 2021, and would invite your pre-order.

What does ‘Forecast Convergence’ for MT PASA DUID Availability help us understand, about the ESB’s Final Advice?

Following from the ESB’s Final Advice, and inspired by the one year anniversary of publications the MT PASA DUID Availability data sets by AEMO (thanks to the ERM-sponsored rule change) we take a quick look about both initiatives might mean for each other. More to come in GenInsights21, time permitting.

Which wind farms performed best in 2020? Marcelle extracts data from the GSD2020 to compare spot (and LGC) revenue, and FCAS cost performance, across wind farms in the NEM.

Price spike in South Australia on Wednesday 23rd February 2022 – (perhaps) because of sudden drop in output at Bungala Solar Farm?

A price spike in SA on Wednesday 23rd February reminds us of a price spike in NSW on Monday 21st February … one due to coal, the other due to solar … but both illustrating *the same* underlying dynamic.