Benny Beatts was asking a pretty commonly asked question here on Twitter recently … in this case with respect to Eraring unit 2 operation on Monday 30th May 2022: 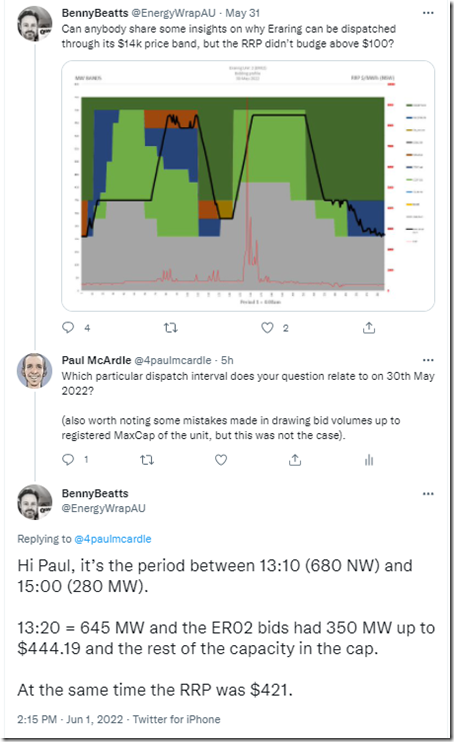 … so I thought it might be useful to answer his question, and illustrate two important points:

When I spoke on the ‘Bang for your Buck’ session at the CEC’s Large Solar Forum in Brisbane recently, Oliver Nunn made the point that many NEM spectators and commentators become fixated with a simplistic notion of bid stacking to explain how prices are set in the NEM.

As is often the case, reality is way more complicated than any simplistic model (which, incidentally, is one of the reasons why forecasting is a mugs game)!

Note that at some point soon we hope Oliver will have his presentation also provided as a guest authored article here on WattClarity.

The question from Benny is essentially one example of where this simplistic notion leads to confusion.

Thankfully with purpose-built tools like ez2view we are helping an expanding number of clients understand more of the detailed nuances of how prices are set and dispatch works in the NEM.  We’ve purposefully built ez2view over more than a decade (investing many $Millions in the process) to reveal an increasing number of these nuances:

1)  Indeed, the increasing popularity of this product is encouraging us to accelerate our investment into the future;

2)  Earlier today we engaged the whole team (with the help of Allan O’Neil) in helping identify a number of additional enhancements we can make to clarify some of the more complex cases of price setting and dispatch that are way more than simplistic bid-stacking… so stay tuned for them beyond the current ez2view v9.4 release.

Time-travelling the a collage of several widgets (‘Unit Dashboard’, ‘Current Bids’ and ‘NEM Schematic’) back to the 13:20 dispatch interval on Monday 30th May reveals the picture – in the example Benny gave, it’s actually not too complex: 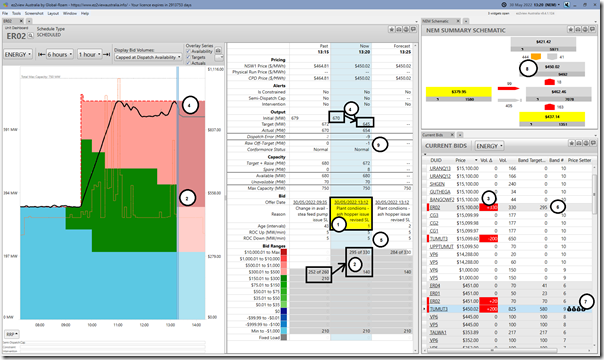 1)  At 13:12 the AEMO received a rebid from Origin about ‘ash hopper issue’ that was first considered in the 13:20 dispatch interval:

remember this article about Gate Closure of bids to understand why this was too late for the 13:15 dispatch interval (this was something explored for GenInsights21 in Appendix 22).

2)  in response to these ash hopper issues:

3)  These changes are shown down at an individual bid tranche level in the ‘Current Bids’ widget.

4)  Because Origin had moved capacity (which was being heavily dispatched) ‘out of the money’ (i.e. to a higher priced bid band above what was needed to clear the market) NEMDE required Origin to reduce its output:

(b)  this can be seen in table and chart.

5)  It’s no coincidence that this was equal to the bid ROCDOWN rate for the unit – NEMDE will strive very hard to ensure that units are not asked to ramp greater than what their bid ramp rates will allow, because of the risk that ramping more quickly can cause physical damage to the plant.

(a)  Which has been denoted as ‘Price Setter’ in the ‘Current Bids’ widget;

(b)  Using the context-sensitive hyperlink in ez2view we can easily open the ‘Price Setter’ widget to see more: 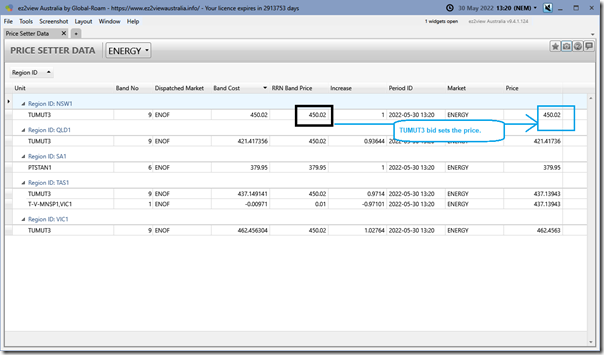 (c)  We see that apart from SA (where Port Stanvac has set the price with its different bid) the TUMUT3 bid has been instrumental in setting the price in NSW, QLD, VIC and TAS:

i.  With a small adjustment in ‘Band Cost’ due to Directlink bids in TAS; and

ii.  With QLD, VIC and TAS also including an adjustment of the bid at the NSW RRN by the dynamic inter-regional loss factor between regions (i.e. see the ‘Increase’ column).

iii.  In this ‘(preliminary) Intermediate Guide’ I called these types of scenarios a ‘Very Simple’ case … and note that this happened 10% of the time or less in most regions of the NEM (though more in TAS).

iv.  Note (with respect to ** above) that this bid band happens to be just below the $451/MWh bid band into which ER02 shifted 20MW of capacity … though Origin would not have known that at the time the rebid was made.

(d)  What’s important to understand, and goes to Benny’s question, is that ER02 can’t set the price because it is not required from a dispatch point of view (too expensive) but is ‘constrained’ to ramp down slowly by its low ROCDOWN rate.

(e)  As such, it acts like a ‘price taker’ for these dispatch intervals where it is out-of-the-money but can’t ramp down more quickly.

9)  What’s also worth highlighting also (though beyond the scope of Benny’s particular question) is that, in this instance:

(c)  Allowing for Regulation Enablement in the AEMO’s Conformance Status logic, a ‘Raw Off-Target’ of –1MW (which readers should note is a very small amount)

(d)  In other articles in WattClarity, and also in GenInsights21, we have explored how ‘Aggregate Raw Off-Target’ has been trending for groups of units … such as all coal units, and all Semi-Scheduled units.  Suggest you watch from the ~36:52 minute mark in this video of presentation to Smart Energy Council.

(B)  Even bids for a single unit are more complex than they might seem!

It’s also worth highlighting that Benny’s view of the bid for ER02 on Monday 30th May has a number of differences from the aggregated bid that was actually used in dispatch.  We can explain more of them in a one-on-one conversation, but  I’ve highlighted a big one here:

Readers should leave aside the colours chosen to represent individual bid bands (in Benny’s case) or bid ranges (in the case of ez2view) – either can work for the user.

What’s particular to note is what’s highlighted in the yellow boxes, and in particular with respect to the aggregate volume bid into the market:

Another tip for NEM watchers!

That’s all I have this evening with respect to Benny’s questions (hope it helped?) …

For more background to how dispatch works and prices are set in the NEM, see the various resources linked on this page on the expanding WattClarity glossary.

Supply side price drivers in the NEM

Five Minute Settlement has commenced … but beware some tripwires!

$1.5b write-down in value of assets at Origin Energy

On Thursday 30th July 2021 Origin Energy announced a large impairment on several different types of assets – its own generation portfolio, renewable PPAs, and gas purchase contracts. However the focus in the media sometimes did not include all three…