Given that it was Jonathon Dyson who wrote the popular article ‘Let’s Talk about FCAS’ way back in March 2017 (when it certainly did not rate in as many conversations as it does these days!) , it was not a surprise to learn that Jonathon is involved in this upcoming session on Wednesday this week about Enabling FCAS at Musselroe Wind Farm.

In the period since Jonathon’s article, we have been progressively fleshing out an overview explanation of FCAS on this page of the Glossary, which might be useful to you.

Because we thought that WattClarity readers would have an interest in attending this Virtual Event, we’ve shared information about it here: 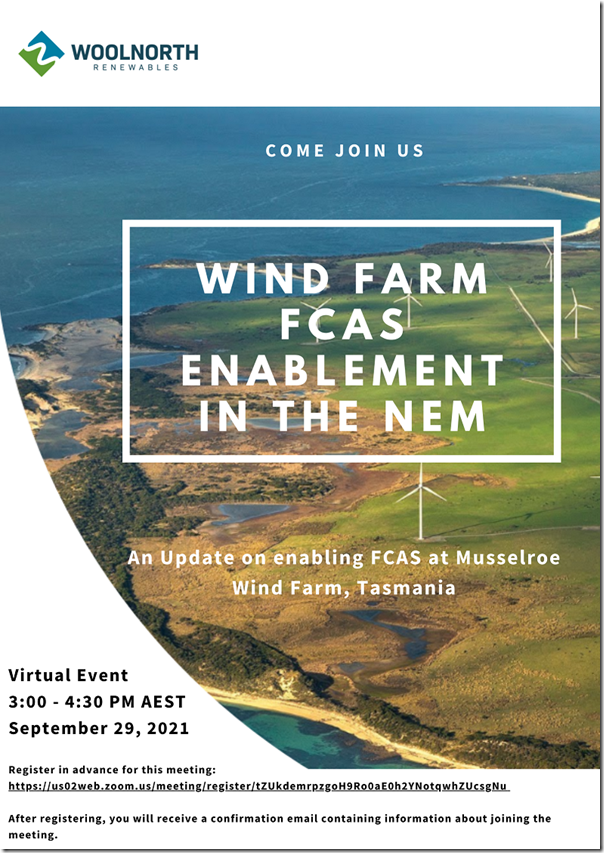 (A)  The changing environment for FCAS

For a couple years now (in the GSD2019 and the GSD2020) we have been trending FCAS revenues for all DUIDs in conjunction with revenues for ENERGY … and we’ve also been watching in real-time via our software.  Increasingly you’ll find FCAS referenced in articles on WattClarity … some of these are tagged here.

Through this period we have been noting that:

1)  Prices for FCAS have changed markedly from what they were 10 years ago; and

2)  Relative revenues possible for certain DUIDs have shifted as well (i.e. FCAS as a proportion of total).

We’ve also seen definite differences in the frequency performance delivered (not just due to FCAS), as discussed on 14th May 2021 in this article.

(B)  Windfarms supplying a ‘Keeping the Lights on Service’ (i.e. FCAS)

In our Generator Report Card 2018 (which we coincidentally compiled in conjunction with Jonathon Dyson’s team at GVSC) we first introduced the concept of an emerging schism between:

2)  ‘Keeping the Lights on Services’ (a collection of other services that were not really seen as a priority in the early stages of market reform – but which at least are receiving more attention, such as in the ESB’s Final Advice to Energy Ministers).

Since we released the GRC2018 at the end of May 2019 that schism has certainly seemed to grow more rapidly … to the point where it seems that the approach adopted by the ESB in their Final Advice was to assume ‘never the twain shall meet’ again.  So the addition of Musselroe Wind Farm as an FCAS provider is very interesting news.

(B1)  Hornsdale 2 Wind Farm, as an FCAS provider

The process of providing FCAS from wind farms did not start with Musselroe … before Musselroe there was an ARENA-sponsored trial of FCAS provision from the Hornsdale 2 Wind Farm.

(B2)  Musselroe Wind Farm, as an FCAS provider

Following on from what was learnt at Hornsdale 2 Wind Farm, ARENA has helped to rung a Musselroe Wind Farm FCAS Trial project (details on the ARENA website are here).

ARENA CEO Ivor Frischknecht said a successful trial at Musselroe could see FCAS be delivered by other Australian wind farms.

“Wind power is playing a big part in Australia’s transition to renewable energy and we want to explore how wind can provide essential grid stability services.

These two trials are proofs of concepts that if successful will create new revenue streams for wind farms while also providing essential stability to the grid, he said.

“With the support of ARENA and AEMO, Hornsdale finished the live testing of FCAS last month. Now, this second trial at Musselroe will allow us to look not just at technical feasibility but also how this can provide a new revenue stream for wind farms,” he said.

“This trial will be able to answer for us the key question that so far hasn’t been answered; does it make economic and commercial sense for a wind farm to provide ancillary services and participate in the FCAS markets?

“It is hoped this will see many more wind farms beginning to help provide FCAS which batteries and solar farms may also be able to deliver,” he said.

“This project aims to identify the true capability of wind power to provide system support, how that might work and what benefit there would be in terms of reliability and security at local and system level,” Mr Ross said.

“This is an opportunity to prove that wind farms can contribute to the stability and reliability of the electricity network.”

Jonathon Dyson has been involved in this process – and was also involved earlier with Hornsdale 2 Wind Farm.

Some of our team will look forward to learning more about what’s going on at the Musselroe trial on Wednesday … and perhaps you’d like to join as well.  Register here!

This 7th case study in a series takes a look at 1 of 3 dispatch intervals during 2016 that saw extreme under-performance (in aggregate) across all Semi-Scheduled plant.

Guest author, Allan O’Neil, takes a look at what’s happened in the (islanded) market for FCAS services in South Australia over the past two weeks with Heywood out of service. He notes:
“generators in SA as a group would have paid out roughly twice in contingency raise FCAS costs what they earned from selling energy”