We’re in the midst of final preparations for Five Minute Settlement, which commences on Friday morning, but I did happen to notice two related events with respect to the Tesla/Neoen Victoria Big Battery:

At 11:35 today, Mark Ludlow’s tweet alerted me to his article in the AFR ‘Vic Big Battery fire caused by cooling system leak’: 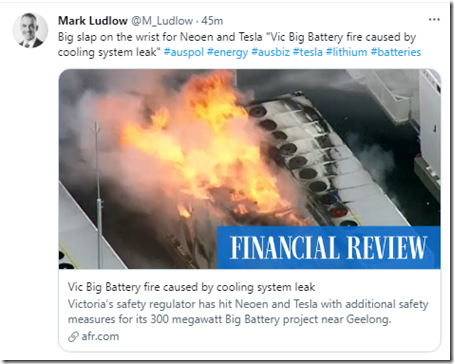 The battery has been offline since the fire that marred its first days of operation on 30th July 2021…. and which we subsequently followed in this series of articles.

Thanks to Mark’s alert, I went off in search of the Energy Safe Victoria report, and first found the media release ‘Cooling system leak led to Victoria Big Battery fire’: 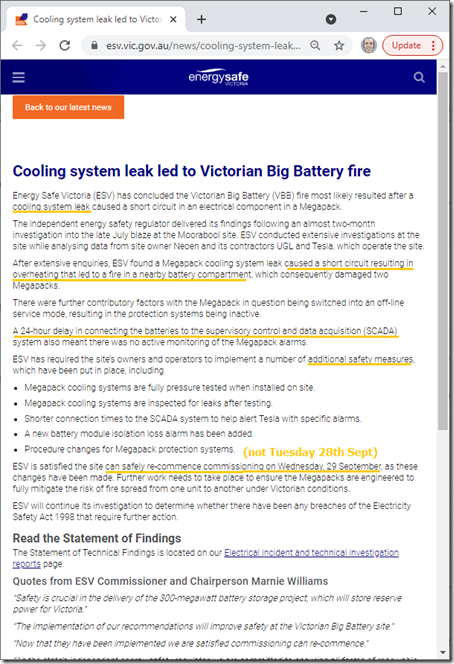 In particular I note the paragraph:

“ESV is satisfied the site can safely re-commence commissioning on Wednesday, 29 September, as these changes have been made. Further work needs to take place to ensure the Megapacks are engineered to fully mitigate the risk of fire spread from one unit to another under Victorian conditions.”

… with my highlighting added.

The news release above links to this 3-page PDF ‘Statement of Technical Findings’ report: 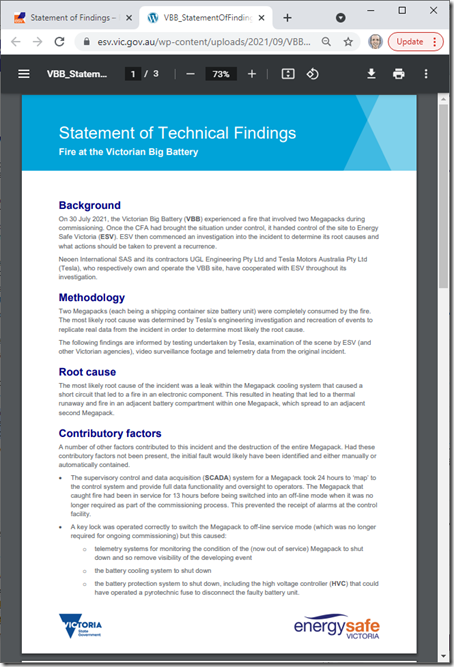 Quick off the mark (i.e. today, earlier than the Wednesday restart schedule indicated by Energy Safe Victoria) some pre-configured alerts inside my copy of ez2view alerted me to the fact that it appears that the unit had started charging from 13:40 today.  This can be seen in this 7-day look-back on operations at Victoria Big Battery using this pre-prepared query in NEMreview v7: 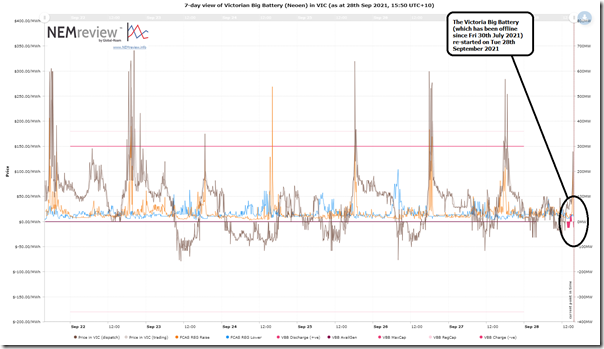 Incidentally, with respect to yesterday evening’s article, we see significant volatility in Regulation Raise FCAS prices in Victoria over the most recent 7 days.

(B1)  Bidding at Victoria Big Battery

Opening up the upgraded ‘Bids & Offers’ widget in the (hot off the press*) ez2view v9.1.2.5 we take a look at bidding behaviour for the VBBG1 component (i.e. the supply side of the battery) and we see that there’s been no volume offered by the battery up until sometime today:

* all licensed users should have received an email about recently (email me if you’ve not seen that!) 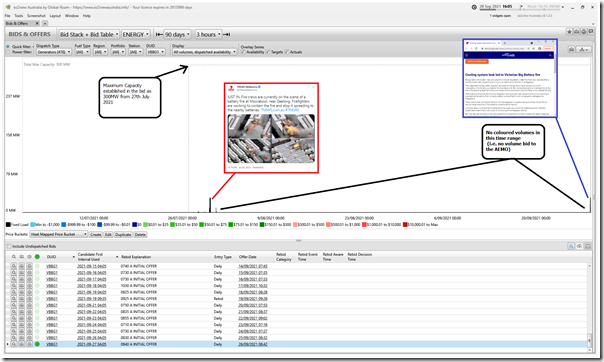 Spanning back 90 days, the period encompasses the start of operations + a period of almost 60 days offline + today’s restart.

This view confirms that the unit had not offered volume into the market yesterday (Monday 27th September), so I am presuming that the change in bid was only made when the Energy Safe Victoria report was delivered.

(B2)  A view in the ‘Forecast Convergence’ widget

Inferring from the above (i.e. no bids yesterday, but operations appearing to start today – hence assuming that at some point this morning volume must have been offered) I wondered if it would be visible in the ‘Forecast Convergence’ widget inside of ez2view: 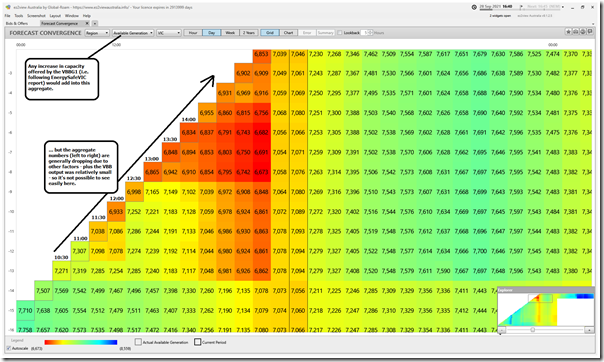 As noted on the image, there are so many other (larger) moving parts across the Victorian region today that it’s not possible to ascertain when the VBBG1 was added into the bid stack… will have to wait until tomorrow.

The colourful representation in the tabular view above suggests there might be another story about what went on in Victoria through the middle of the day (i.e. unrelated to the VBB) … but no time to dig now.

(B3)  A forward view, out 3 years in ‘MT PASA DUID Availability’

Opening up the ‘MT PASA DUID Availability’ widget (which was also tweaked for ez2view v9.1.2.5) we see that there is no indication in the MT PASA bids of when the unit will be fully available to the market in the next 3 years: 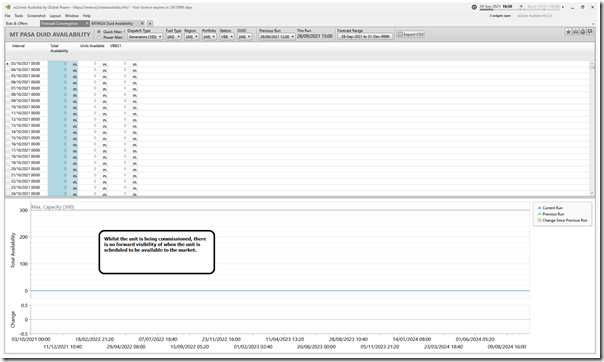 The addition of this data set is a great enhancement, thanks to the ERM Rule Change.

After posting this article at 16:59 today I’ve started to notice other commentary on social media.

One of the early readers has also pointed out that Giles Parkinson has also written ‘Australia’s biggest battery given all clear after Tesla Megapack fire investigation’ today on RenewEconomy.  I had not noticed that, and it might be of use to some readers here.