Today’s newest low point for minimum demand in South Australia was just the latest in a growing (and accelerating!) number of milestones being reached in the ‘race to the bottom’.  Each time the bottom drops lower still reminds us of the reasons behind Daniel Westerman’s BHAG announced just over two months ago!

Timely, then, that on Friday (24th September) the AEMO announced this “new market signal to improve transparency and system security”…. which goes on to say:

(A)  The new notice arrangement

Step 2 = Advise action has been taken to maintain system security.

Step 3 = Notify that curtailment of rooftop solar PV is occurring as a last resort because preceding actions have not been sufficient to maintain power system security.

This was laid out in this helpful Factsheet about ’Operating the grid with high roof-top solar generation’, from which I have extracted this illustration: 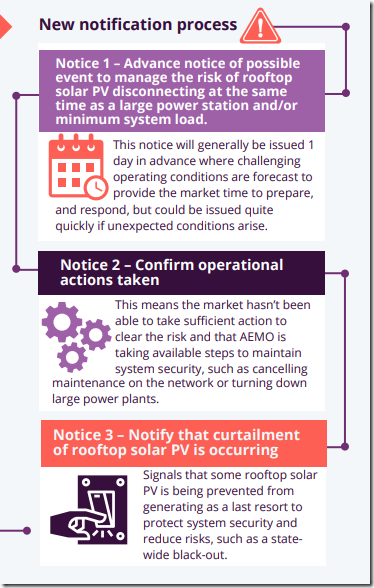 (B)  Similarities already in use … with LRC/LOR Notices

Those notices encourage generators to bid into the market or businesses to reduce usage and inform the market of the activation of the Reliability and Emergency Reserve Trader mechanism (i.e. RERT) to avoid load shedding.

There have already been plenty of articles written here about ‘minimum demand’ … so we’ll wait to see how soon it will be that we post any new articles about this new Market Notice Framework about ‘Minimum System Load’ and/or ‘Distributed Photovoltaics (DPV) Contingency’!

Third article already today … this one about AEMO and Reserve Trader in the NSW region.

Guest author, Andrew Wilson, reviews the performance of his home solar + battery system at the one year mark after installation.

Be the first to comment on "With ‘Minimum Demand’ plunging across mainland regions, AEMO initiates new Market Notices relating to Rooftop PV"