The weekend just past was one in which I was focused historically (including on Sunday 24th January 2021) but that did not stop new milestones being achieved.  One of these was noted by Dylan McConnell here: 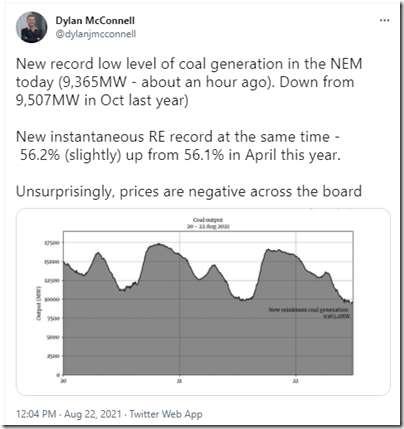 Certainly not wanting to post another long article, after this morning’s ‘War and Peace’ effort, I thought I would take a quick look:

The weekend was another warm one, at least in Brisbane (feels like winter has already left) – and so it’s no surprise, really, that Underlying Demand is low and (with the sunshine) solar production was up.  Adding those together means low Operational Demand again, and also negative prices.

Here’s a quick view of what was happening at 12:05 on Sunday 22nd August (i.e. when Dylan tweeted the above) seen via Time Travel in ez2view: 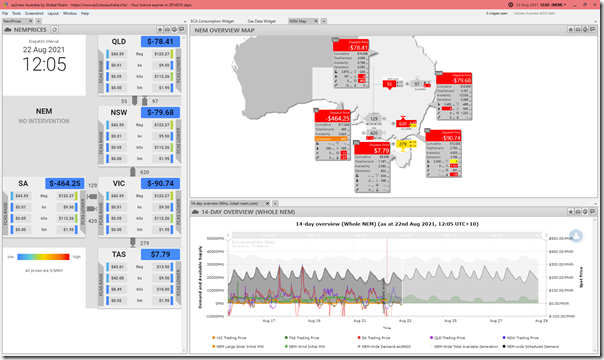 Note the negative prices across all 4 x mainland regions (especially negative in South Australia) – and also that it was the Lower prices that were somewhat elevated (for Regulation FCAS and Contingency FCAS 60 seconds) as a result of the plant mix deployed.

Also, I have a vague recollection that the NEM-wide chart shown in the bottom-right should be accessible to a fairly broad range of people who log in at this ‘Dashboards’ site, as a live updating trend.

No surprise that the weekend milestone (i.e. solar production was more than coal production for an instant in time)  that this has since been covered in the usual places:

3)  Not so quick off the mark at PV Magazine, but I’d expect to see an article there very soon!

What did surprise me a whole lot more was the article ‘Solar power gets its moment in the sun, eclipsing coal’ by Perry Williams in the Australian today … particularly when it appears in people’s twitter feeds like this when they link to it: 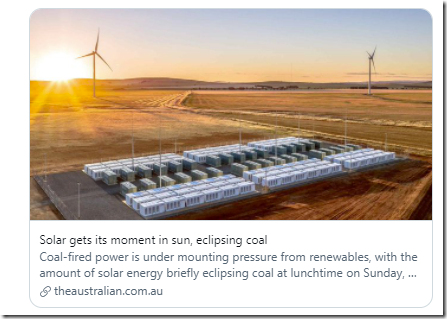 There are bound to be other references elsewhere … I have not checked at this point.

(C)  How did generators bid through the weekend?

Out of curiosity, I used one of the early-release copies of ez2view v9.0 (v9.1 under active development, and coming ASAP!) we have running in order to review what happened with generator bids over the weekend – here’s a ‘Bids and Offers’ widget view of all the supply-side offers, no matter what fuel type: 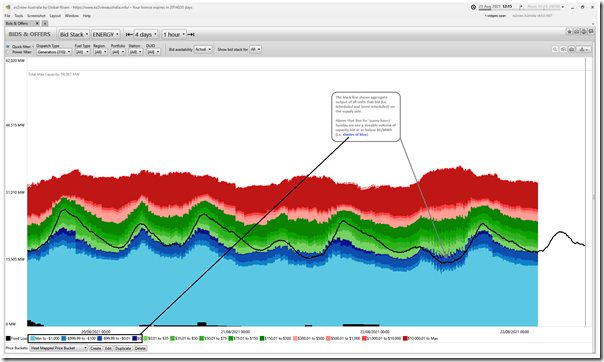 As noted on the image, this ez2view snapshot shows a sizeable volume of un-dispatched capacity bid at or below $0/MWh for the period.

Delving in further, by filtering down to just Wind and Large Solar plant, we see a more nuanced picture of some of what this all meant for these Semi-Scheduled plant: 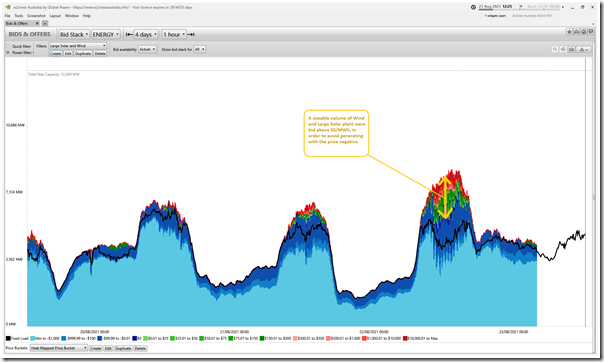 As we see here, in addition to the un-dispatched volume shown in the blue ranges, there was also a sizeable volume of wind and solar rebid* above $0/MWh (and sometimes all the way to the Market Price Cap) in order to avoid generating at times when the price is negative.

*  The requirement for Wind Farm and Large Solar Farms to do this (and not just switch off when they do not like the price) was confirmed by the AEMC in March 2021 following a process commenced with the AER Issues Paper of June 2020, and which we followed closely on WattClarity.

Note also, in the ez2view chart above, that the aggregate energy-constrained Availability for Wind and Solar was significantly higher on Sunday than it was for Saturday or Friday daytimes.  So not only was dispatch of Semi-Scheduled wind and solar lower on Sunday than Saturday, the capability was higher as well … hence a large amount of unused capacity.

Whilst the weekend provided milestones for renewables penetration, and also for low coal generation, it also presented another moment to reflect on some of the challenges ahead – something not lost on a number of people, including Ariel Liebman on Twitter earlier today:

… and it also feeds into this conversation on LinkedIn that’s been running over the past week or so: 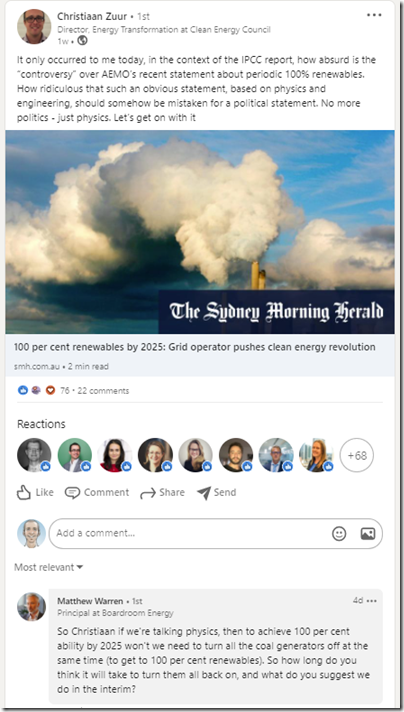 As noted in that thread yesterday, this is something that a number of us (i.e. authors, and a number of analysts) are all separately thinking through as part of the GenInsights21 project … with the plan being that we’ll coalesce the discrete bundles of thoughts into another Appendix included in the report before it is released.