As a brief PS to today’s earlier article about low point for QLD minimum demand, it turns out that there is a new lowest point set for declining minimum demand on a NEM-wide basis.

This is shown in the following trend from NEMreview v7, zoomed in a bit to just start from January 2010*:

* Remember that Tassie did not join the NEM in the early years, and the main problem for the NEM up until around January 2010 was rising peak demand. 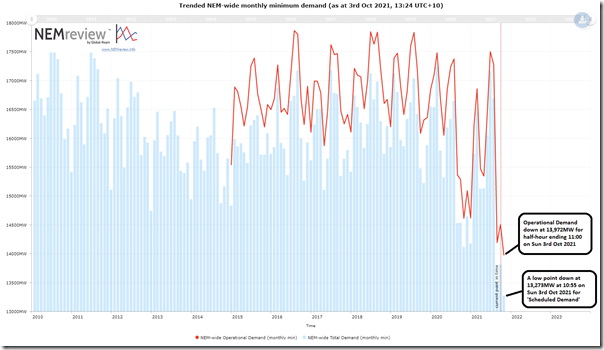 I’ve also chosen to skim past some of the gory details of how demand is measured by leaving out the 3rd common measure of demand published by AEMO … ‘Demand and Non-Scheduled Generation’, on a 5-minute basis.  This is closer to Operational Demand than Scheduled Demand.

As per the annotations we reached:

… so these low point were slightly before today’s low points in QLD.

I’d also not written previously about the 22nd August low point – but:

1)  Had written about Sunday 23rd August, when coal had eclipsed solar for a period of time; and

2)  Had also written about the prior Sunday 15th August 2021, which had – very briefly – been ‘record low point’ for NEM-wide Operational Demand.

Here’s a snapshot from NEMwatch v10.2 at the 11:40 dispatch interval … so under an hour after the 10:55 low point for Scheduled Demand noted above. 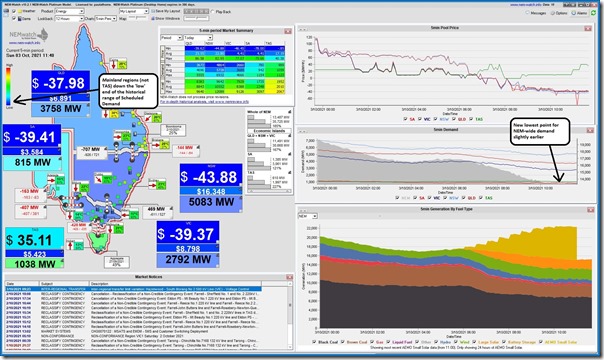 No surprise, really, to see that most regions (with the carve-out due to rooftop PV) showing Scheduled Demand levels down the deep blue end of their historical range (except for Tasmania, which sings to its own tune).

AEMO did indeed confirm this low point for Operational Demand on a NEM-wide basis in this tweet later on Sunday:

I also note that, on the following day, Mike Davidson at the AEMO also posted more detail on LinkedIn here about this record low-point on Sunday 3rd October: 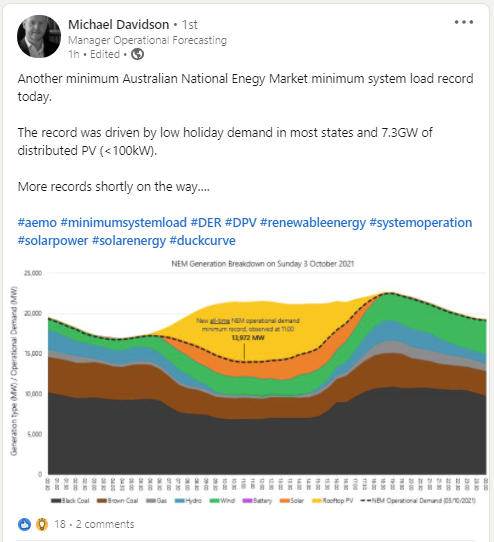 Price spikes in South Australia above $9,000/MWh – due to unforecast cloud cover?!

Out-of-the-blue, the price spikes up near $10,000/MWh in South Australia on an otherwise ‘boring’ day … a sign of what we should expect increasingly in future?