We were pleased to release our GenInsights21 report in December, just a couple weeks before we ticked into 2022.  In the months since, we have appreciated all of the feedback from the growing number of clients who have purchased, and are gaining a lot of value from the report (more on this later).

It has also been pleasing to see a host of references and articles in the media where our research and analysis has helped a wider audience understand the state of the NEM and what challenges may be in store as we navigate this energy transition.  I have summarised some of these references about GenInsights21 in this article.

What is Generator Insights 2021?

It is an update to the analytical component of the Generator Report Card 2018 that we released in May 2019. 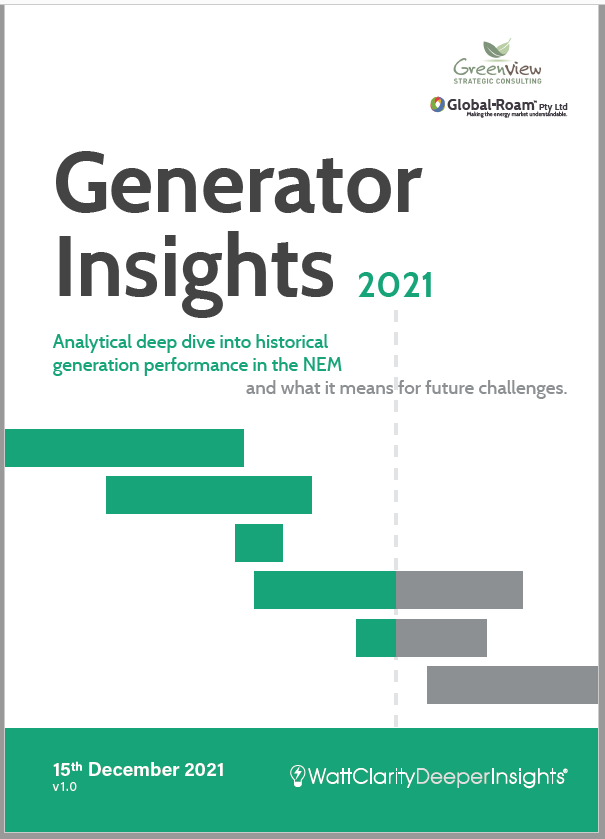 GenInsights21 covers much ground, analysing and summarising 20+ years of generation data in the NEM, with a particular focus on more recent years – exploring what the past tells us about future challenges in Australia’s energy transition.

The report is broken up into:

This is shown figuratively here:

Over time additional context might be provided in articles tagged GenInsights21 on WattClarity .

References in the Media

We were pleased to see a number of industry commentators and journalists cover much of our observations and research since the report’s release. 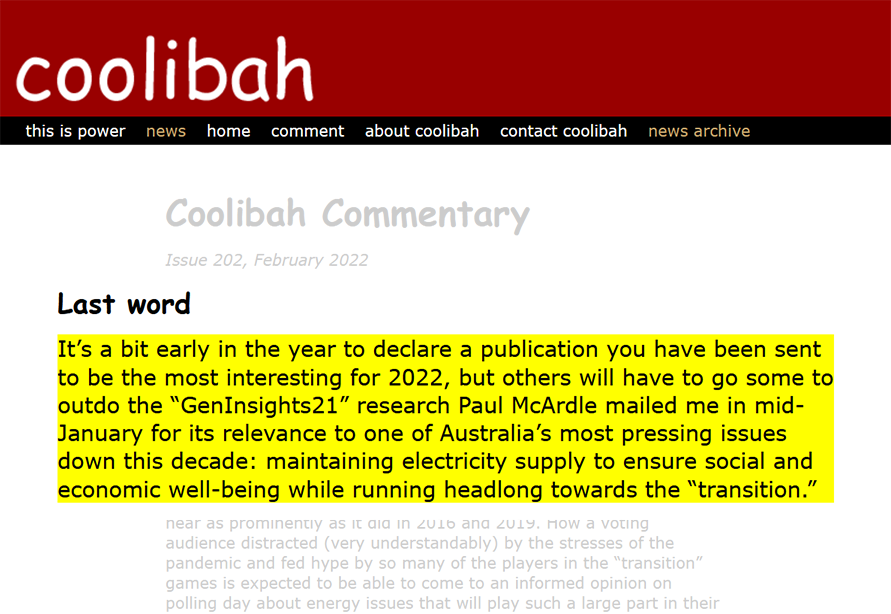 “It’s a bit early in the year to declare a publication you have been sent to be the most interesting for 2022, but others will have to go some to outdo the GenInsights21 research Paul McArdle mailed me in mid-January for its relevance to one of Australia’s most pressing issues down this decade”

Keith went on to add:

“The considerable merit of GenInsights21 is that it tackles a swathe of the challenges without emotional and/or political baggage.” 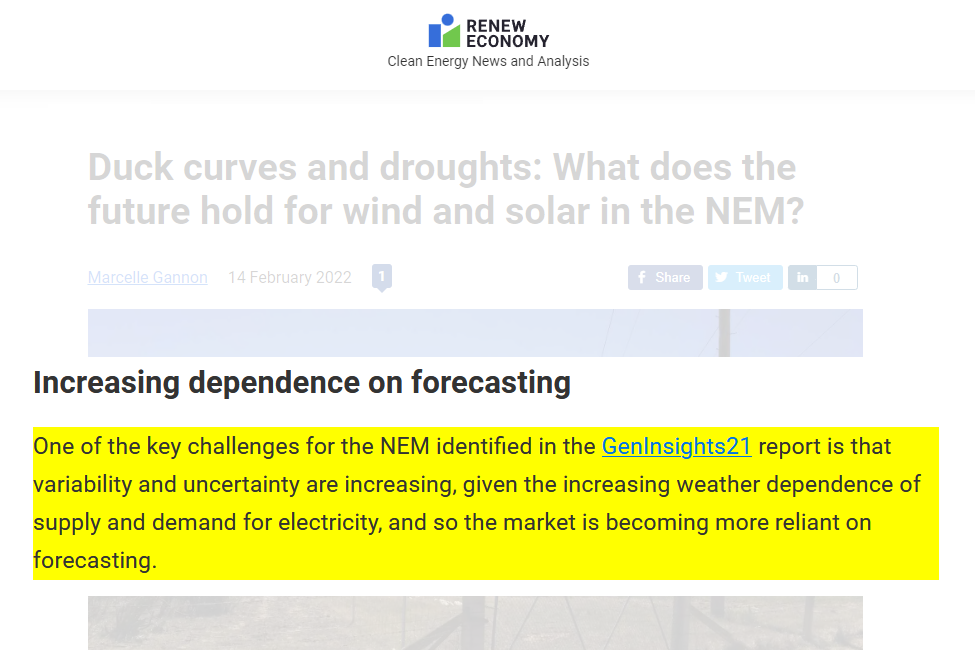 Our very own Marcelle Gannon was featured on RenewEconomy with her piece Duck curves and droughts: What does the future hold for wind and solar in the NEM which referred back to the research and analysis on intermittent generation within the report.

“One of the key challenges for the NEM identified in the GenInsights21 report is that variability and uncertainty are increasing, given the increasing weather dependence of supply and demand for electricity, and so the market is becoming more reliant on forecasting”

The article was originally published here on WattClarity in mid-February, and has also been re-published on the PV Magazine website. 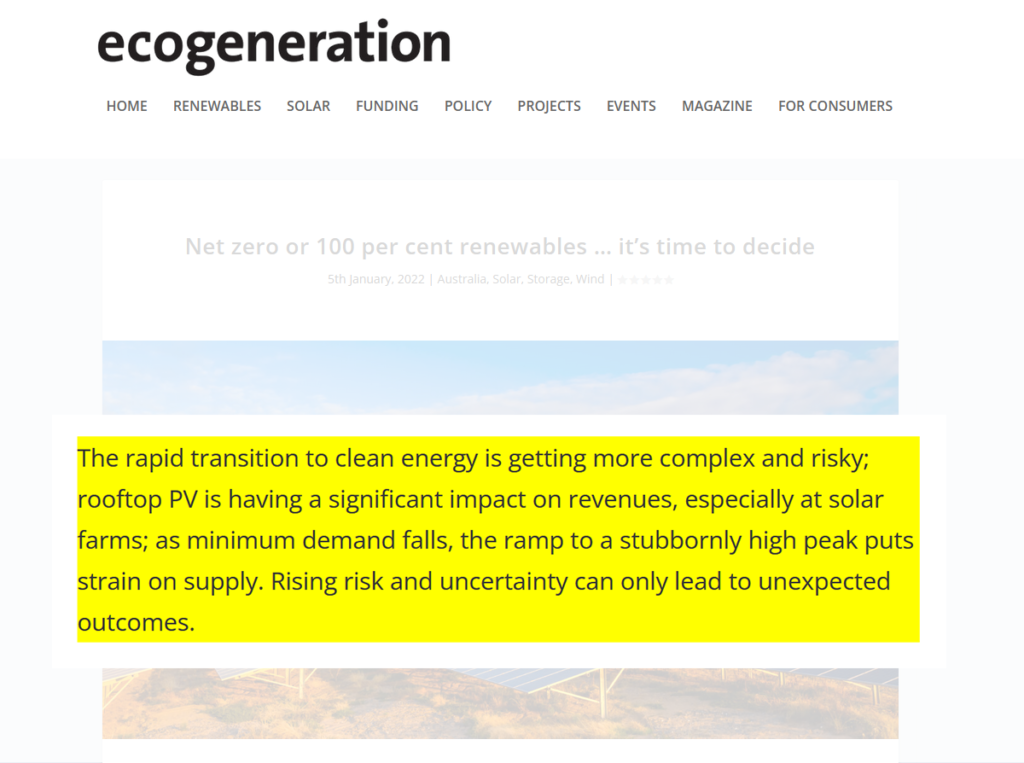 In early January, Jeremy Chunn of Ecogeneration interviewed Paul and Jonathon a few weeks after our initial release and captured some of the main observations from the report in his article Net Zero or 100% Renewables.. it’s time to decide

“The rapid transition to clean energy is getting more complex and risky; rooftop PV is having a significant impact on revenues, especially at solar farms; as minimum demand falls, the ramp to a stubbornly high peak puts strain on supply. Rising risk and uncertainty can only lead to unexpected outcomes.”

They went on to discuss the questions of “How much PV is too much?” and “Can dispatchables be pushed too far?”. 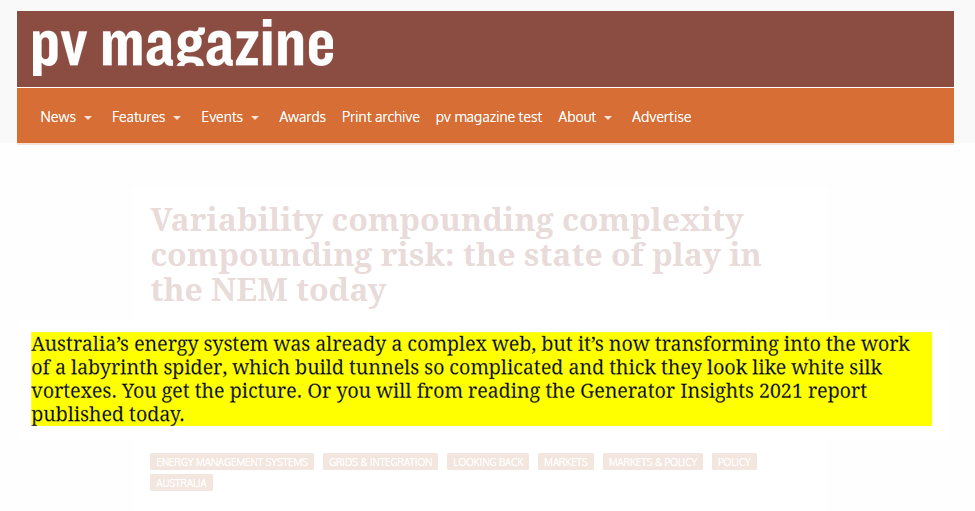 In December, Bella Peacock of PV Magazine wrote about the release in her article Variability compounding complexity compounding risk: the state of play in the NEM today

“Australia’s energy system was already a complex web, but it’s now transforming into the work of a labyrinth spider, which build tunnels so complicated and thick they look like white silk vortexes. You get the picture. Or you will from reading the Generator Insights 2021 report published today.”

Further in the article, Bella went on to point out some of the report’s key observations on the topics of DERs, Storage, Price Signals and Modelling. 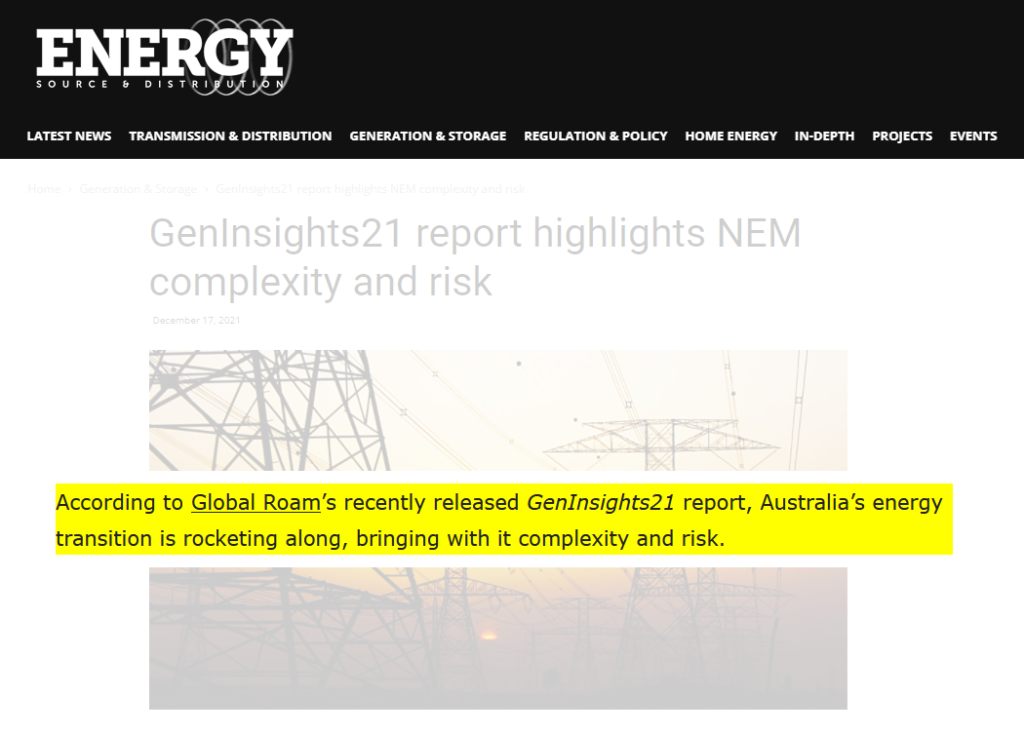 In December, the team at Energy Source & Distribution Magazine featured the report where they relayed many of the findings in the article GenInsights21 report highlights NEM complexity and risk

“According to Global Roam’s recently released GenInsights21 report, Australia’s energy transition is rocketing along, bringing with it complexity and risk. The 600-page report provides an analytical “deep dive” into historical generation performance in the NEM, and what this means for future challenges.”

Another respected veteran of the industry, David Leitch of ITK Services, shared his review of GenInsights21 here on WattClarity back in December.

“Like any good analyst, GR and GVSC conclude that these risks require more information and more analysis.  And I agree.  Specifically GenInsights21 draws a conclusion that “the market” has become more reliant on forecasting. For many of us, the thought that keeping the lights on depends on forecasting is indeed a concern.”

Rod Myers of The New Daily used a graph taken from the report to highlight the NEM’s decreasing amount of generation from coal in his February article Dropping coal will hike power costs – unless the government gets its act together. We are currently in the final stages of completing the latest edition of our annual Generator Statistical Digest publication. Like previous years, the GSD2021 will feature profiles for all operating power stations/generating units in the NEM, encompassing over 10 years of performance and financial data for each unit.

As many of you would be aware from last week’s news coverage, Brisbane has experienced major flooding throughout the city. Thankfully, all of the Brisbane-based members of our team remained safe and dry, but the impact of power outages and other logistical constraints has meant there will be a slight delay in our ability to release the GSD2021.

We still expect this to be released in March, and more information will be provided here (when it is ready).

Last Wednesday (15th December) we released GenInsights21. In this article we provide a full list of the 28 Appendices included with the publication, and from which many of the Key Observations have been drawn.

Observation 8/22 from GenInsights21–what is the purpose of the ESOO (Electricity Statement of Opportunities)?

We’ve chosen to republish Observation 8 (of 22) within Part 2 of GenInsights21 in this article, to help readers ask that question … what is the purpose of the ESOO?

What does ‘Forecast Convergence’ for MT PASA DUID Availability help us understand, about the ESB’s Final Advice?

Following from the ESB’s Final Advice, and inspired by the one year anniversary of publications the MT PASA DUID Availability data sets by AEMO (thanks to the ERM-sponsored rule change) we take a quick look about both initiatives might mean for each other. More to come in GenInsights21, time permitting.

The rise of the auto-bidder

A trend of monthly total number of bids shows clear indication of ‘the rise of the auto-bidder’.

Be the first to comment on "Early media coverage of GenInsights21"