This article follows on from Part A which inspected how Queensland rooftop PV output varied on the 1st and 2nd of February 2022 at the state level.

In this article we look closer into where and when the changes in rooftop PV occurred, narrowing our assessment to south-east Queensland regions.

Background from Part A

In Part A we noted how rooftop PV output varied in association with demand and temperature.

Part B – Analysis at a 2-digit postcode level

In this article we look closer into where and when the changes in rooftop PV occurred.

To do this, we delve further into the detail, using the APVI’s estimates for rooftop PV production at a 2-digit postcode level.  The following map shows the locations of the postcode regions in Queensland.  The region we’ve described as North Brisbane is 40XX, coloured as the tiny green space in the map below.

Clearly, the 40XX postcode region is the smallest one, geographically – but that’s not to dismiss its contribution to rooftop PV, which can be seen (below) is as great as 400MW through recent months.

On the 1st and 2nd February 2022, rooftop PV wasn’t impacted across the whole state

Inspecting APVI rooftop PV output estimates aggregated to our postcode regions, we can see that postcode regions 40XX, 41XX, 42XX, 43XX and 45XX were most impacted by cloudiness on the 1st and the 2nd of February (i.e. the ones in the south-east corner, from Gympie south to the border).

The grey shaded area in the chart below represents the assumed maximum output for early February 2022.

Comparing the two days, Wednesday the 2nd resulted in lower output throughout. The difference was most evident from 10:00 onwards, in the regions that were impacted.

Zones 47XX, 48XX and also 44XX and 46XX were largely unaffected by the clouds. These zones span wider areas and cover inland and northern parts of Queensland. The exception was zone 46XX on Wednesday the 2nd where afternoon output dropped earlier than usual after 14:00. 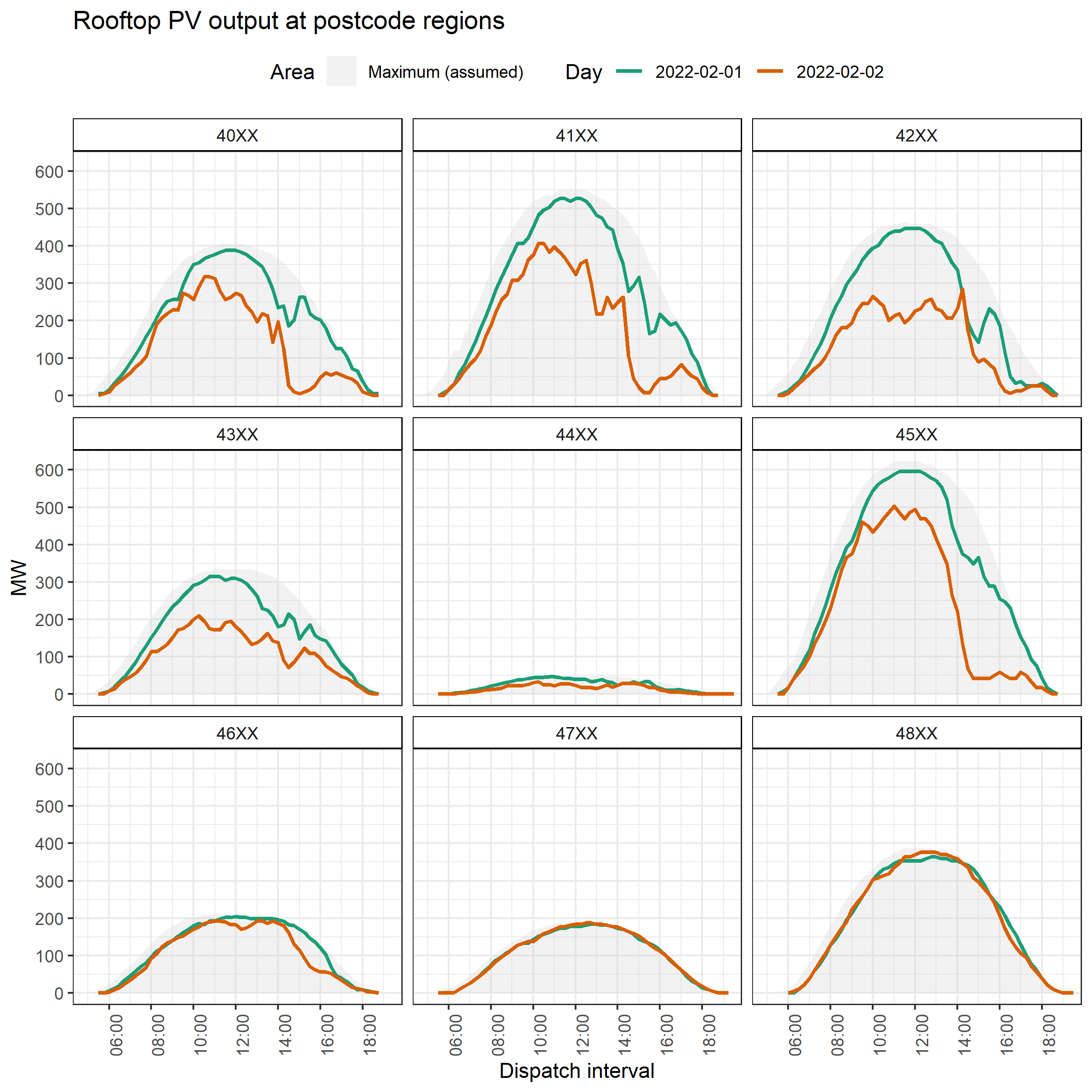 The timing of rooftop PV reductions was different among postcode regions

Regions 41XX and 42XX started a decline in output 20 to 30 minutes later than region 45XX.

The strongest reversal of cloudiness to clearer skies appeared in region 40XX and 42XX (and to a lesser extent 41XX), as indicated by the rise in output during the period 15:00 to 16:00.

The most considerable drop after 16:00 on Tuesday was in region 42XX (Logan City and surrounds) where output dropped almost to 0 MW by 16:40. 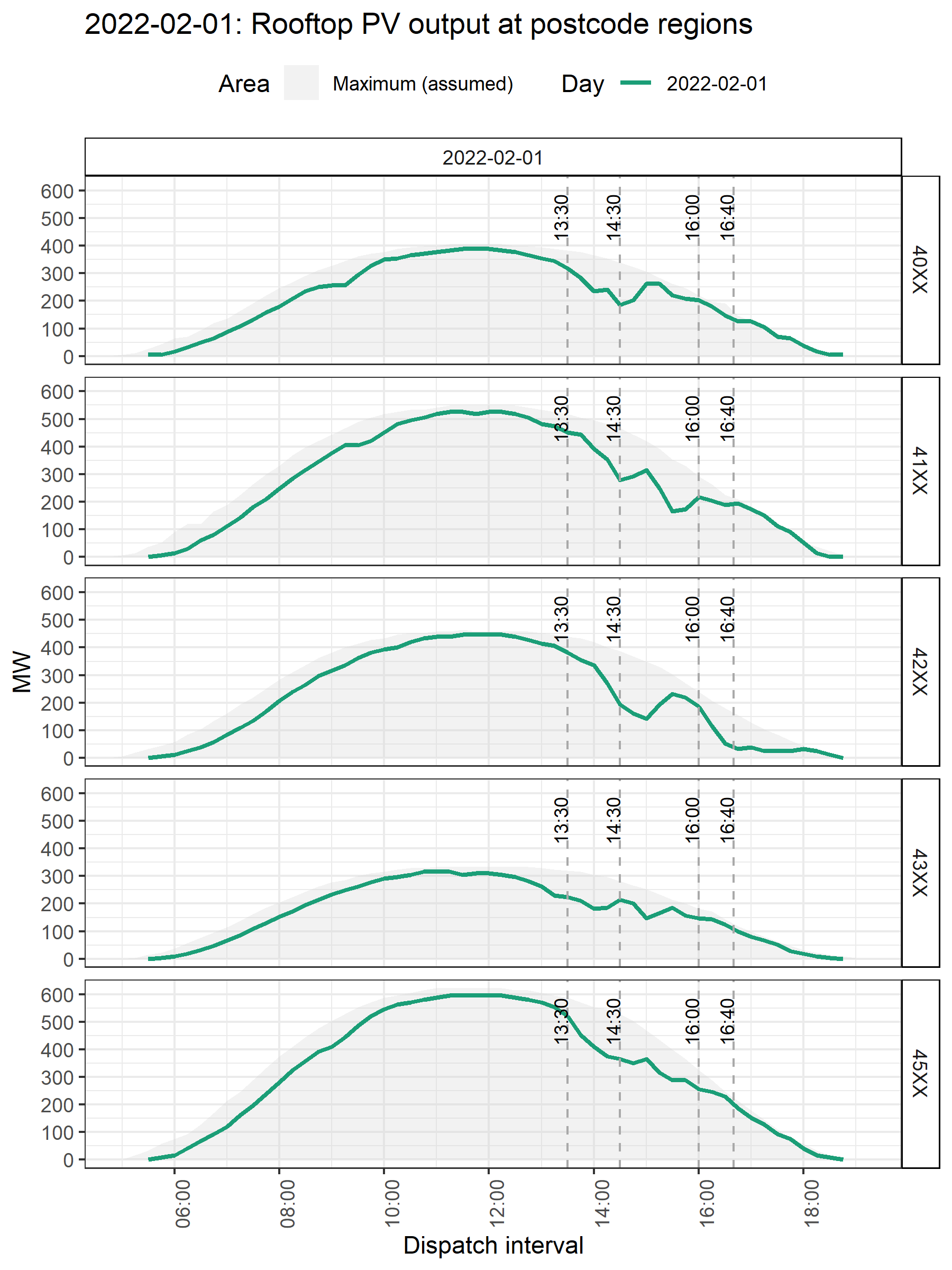 Rooftop PV output on the 1st

The following step-through charts  show the clouds and rooftop PV output for the selected postcode regions.

Satellite images are from the Himawari-8 satellite (https://himawari8.nict.go.jp/).

Dots on the satellite images are locations (from north to south):

Tuesday’s clouds were patchy early in the afternoon at 13:30 and would have often had localised impacts due to their sizes. PV output in most regions had started to drop away from our assumed maximum level (grey shaded area). 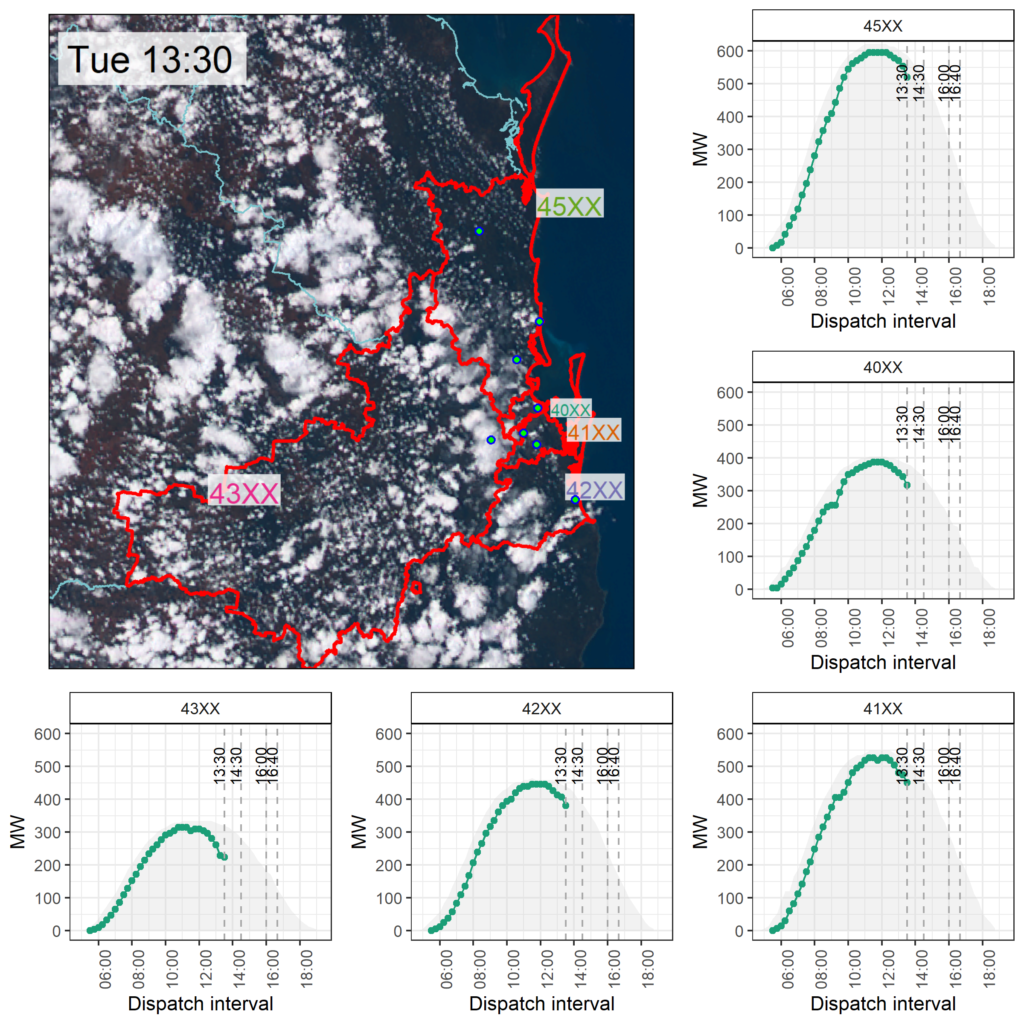 By 14:30 clouds had developed over Brisbane, moving in from the south-west. By this author’s own assessment, the super-cell that was reported to have occurred around this time appears to have emerged just south of, and moving north into, region 41XX. 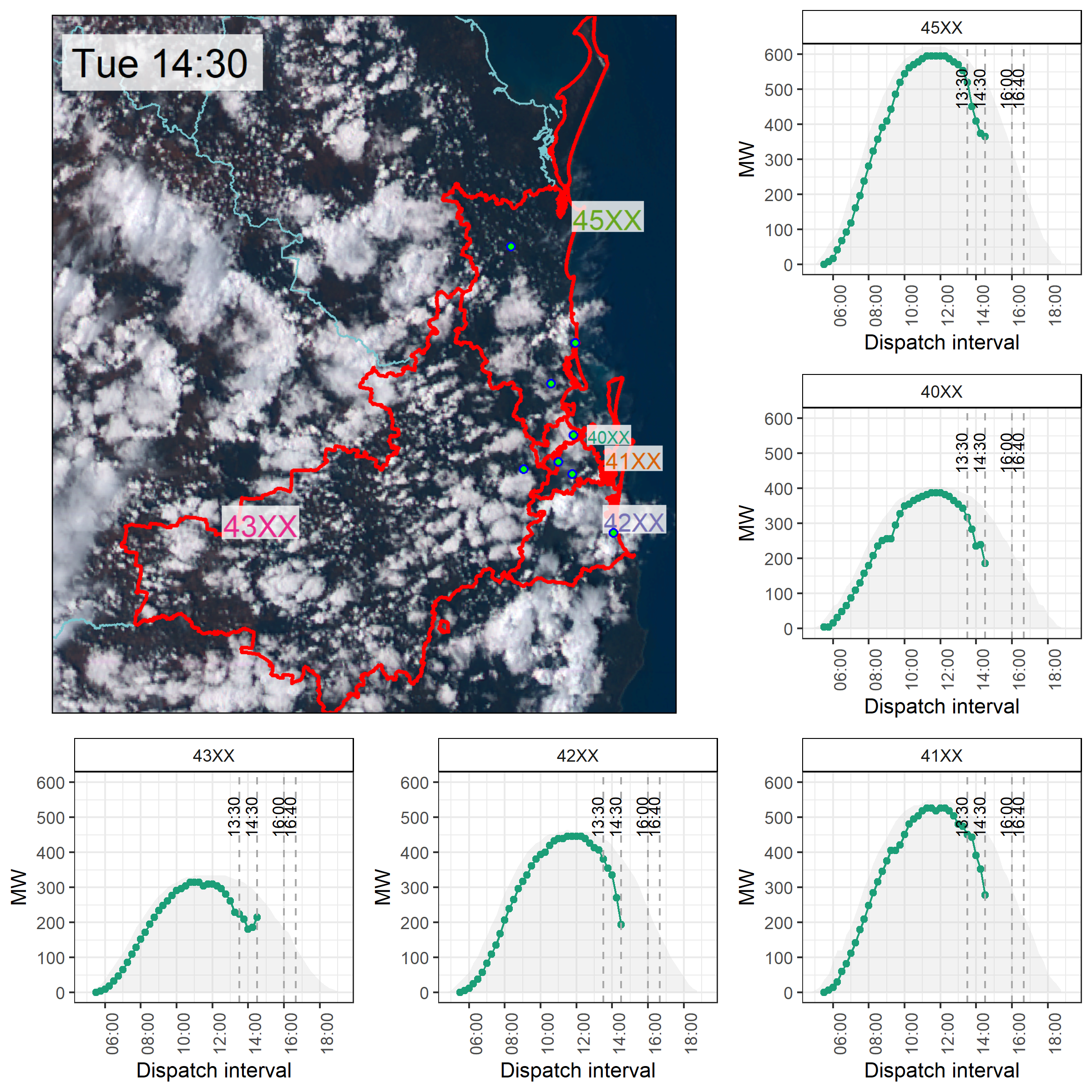 Skies had cleared in north Brisbane (40XX) and, to a lesser extent, over populated parts of region 45XX to drive region-specific increases in rooftop PV output.

Although much of region 42XX was clear, clouds were covering the Gold Coast and populated areas in that region. This helped push the estimated PV output to below 50% of maximum for that time of day. 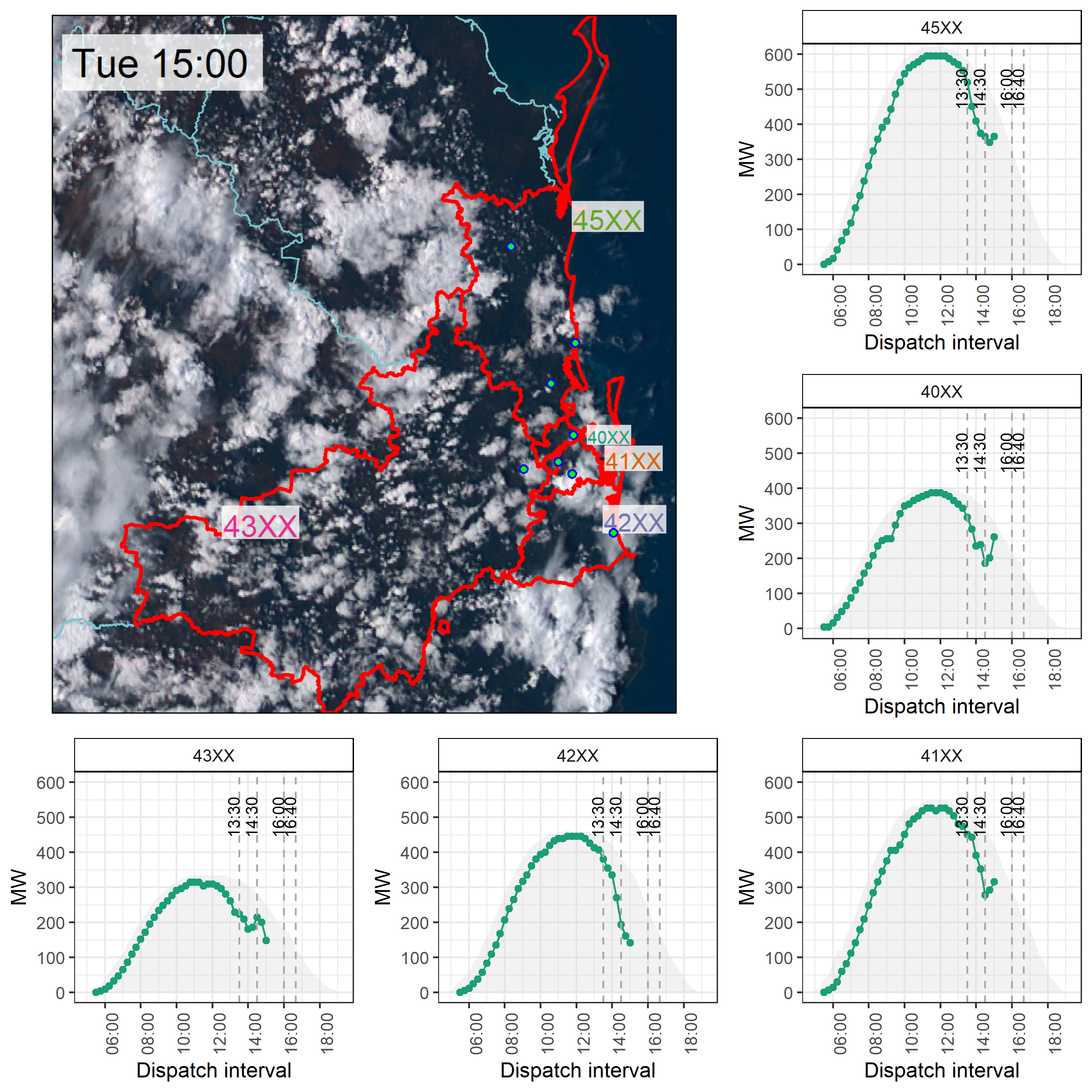 Conditions had cleared in much of 45XX, 40XX and 41XX by 16:00. Further activity was developing inland from the Gold Coast (42XX), in the bottom right of the image.

Region 41XX experienced an increase in rooftop PV output due to the clearing skies. 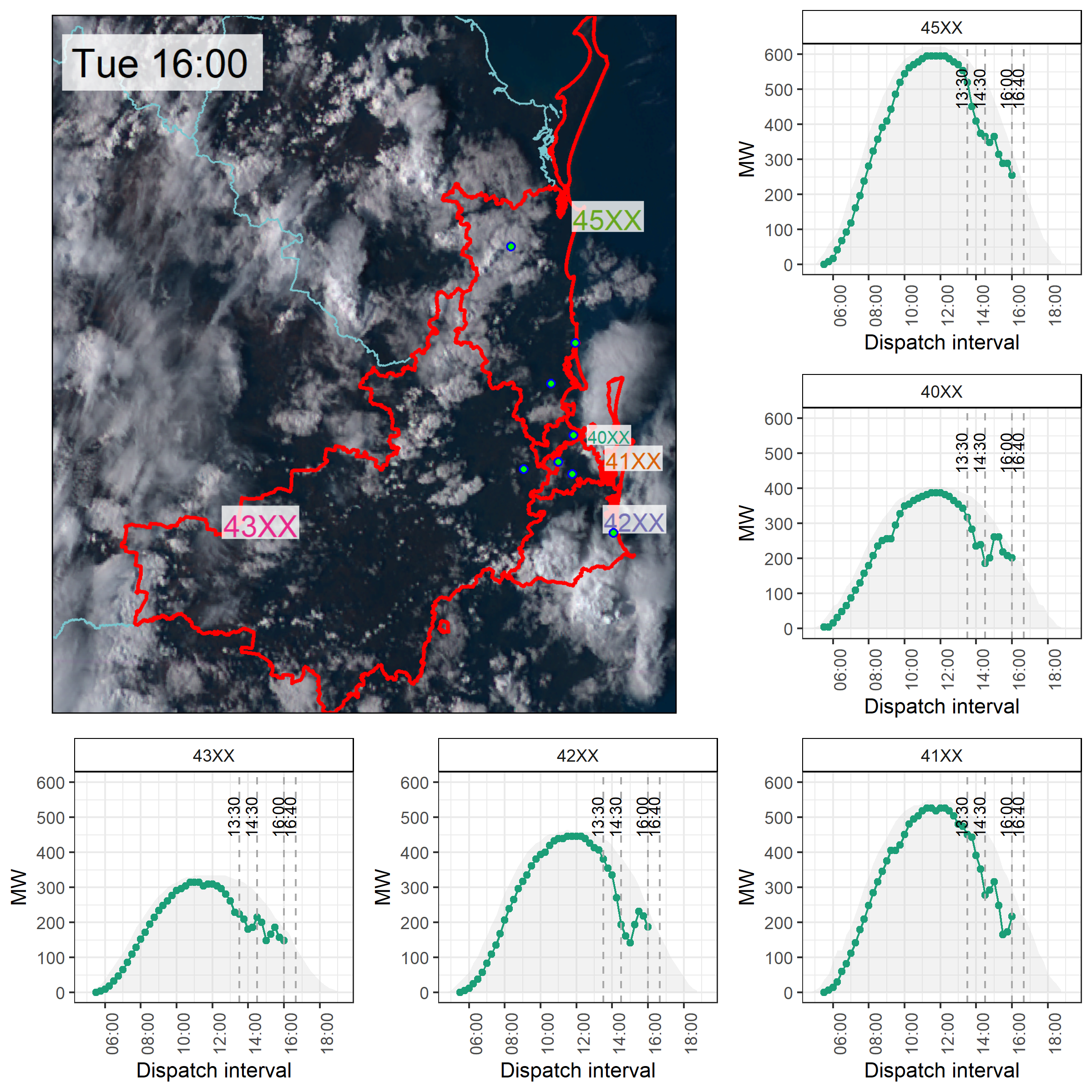 By 16:40 larger clouds over the Gold Coast postcode (42XX) had intensified and were covering most of that region.

Somewhat contradicting the link between clouds and rooftop PV were what appear to be thinner (possibly higher) clouds which had progressed northwards to cover Logan City, region 41XX. In that region the estimated rooftop PV output did not decrease. Reasons for this might include the number of sampled sites (and or temporal averaging) in the APVI upscaling method that is used to estimate the postcode region-level output. As stated on https://pv-map.apvi.org.au:

“in some ‘2-digit postcode regions’, a small number of systems are contributing data and one or more systems may dominate the estimate”. 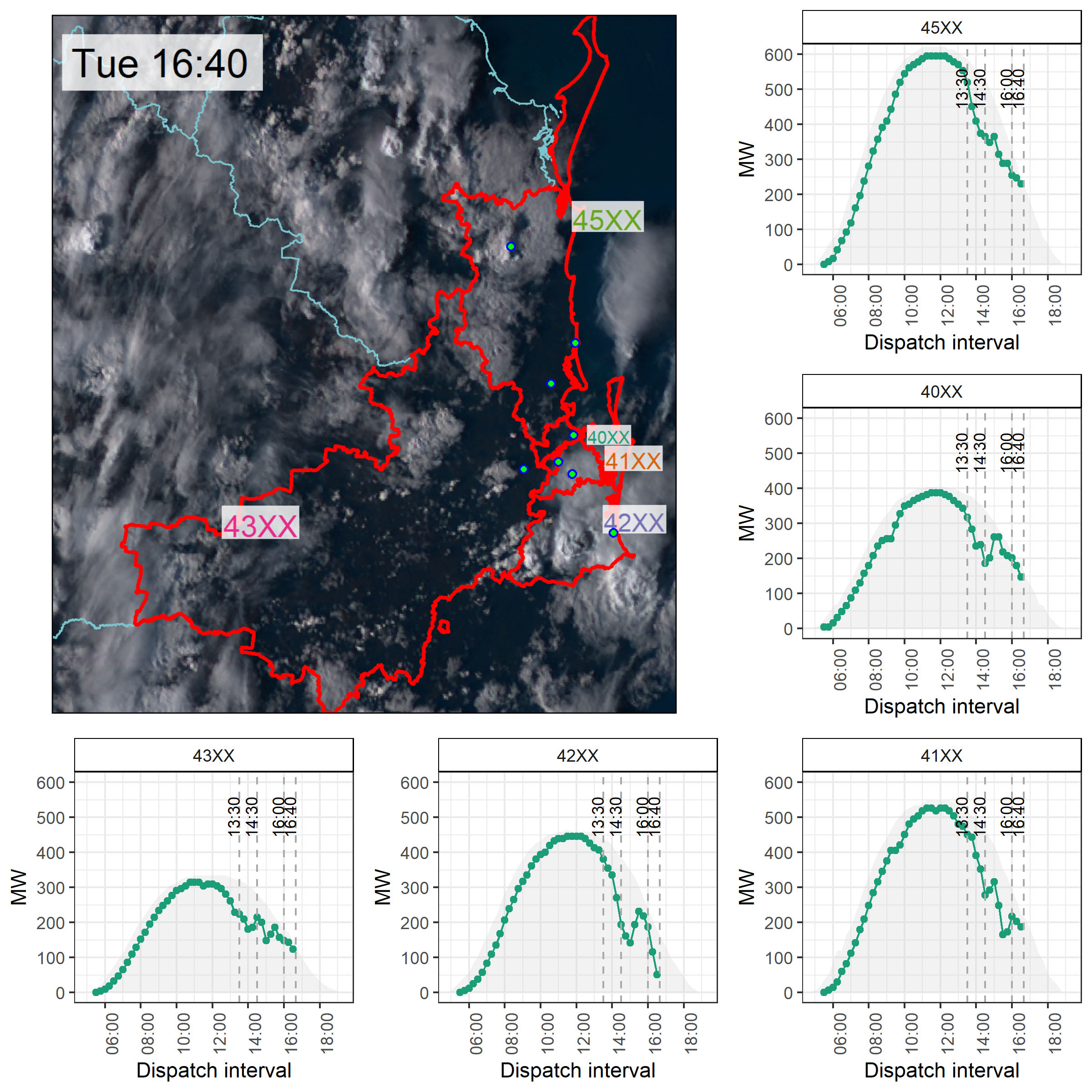 Excluding region 45XX the strongest PV impacts began at 14:10 over north Brisbane, and had extended to southern Brisbane (41XX) and the Gold Coast (42XX) soon after.

Recalling a finding from Part A,  the Queensland region demand spike reached its peak at 14:45. This coincides with the low levels of PV output in all postcode regions charted below. 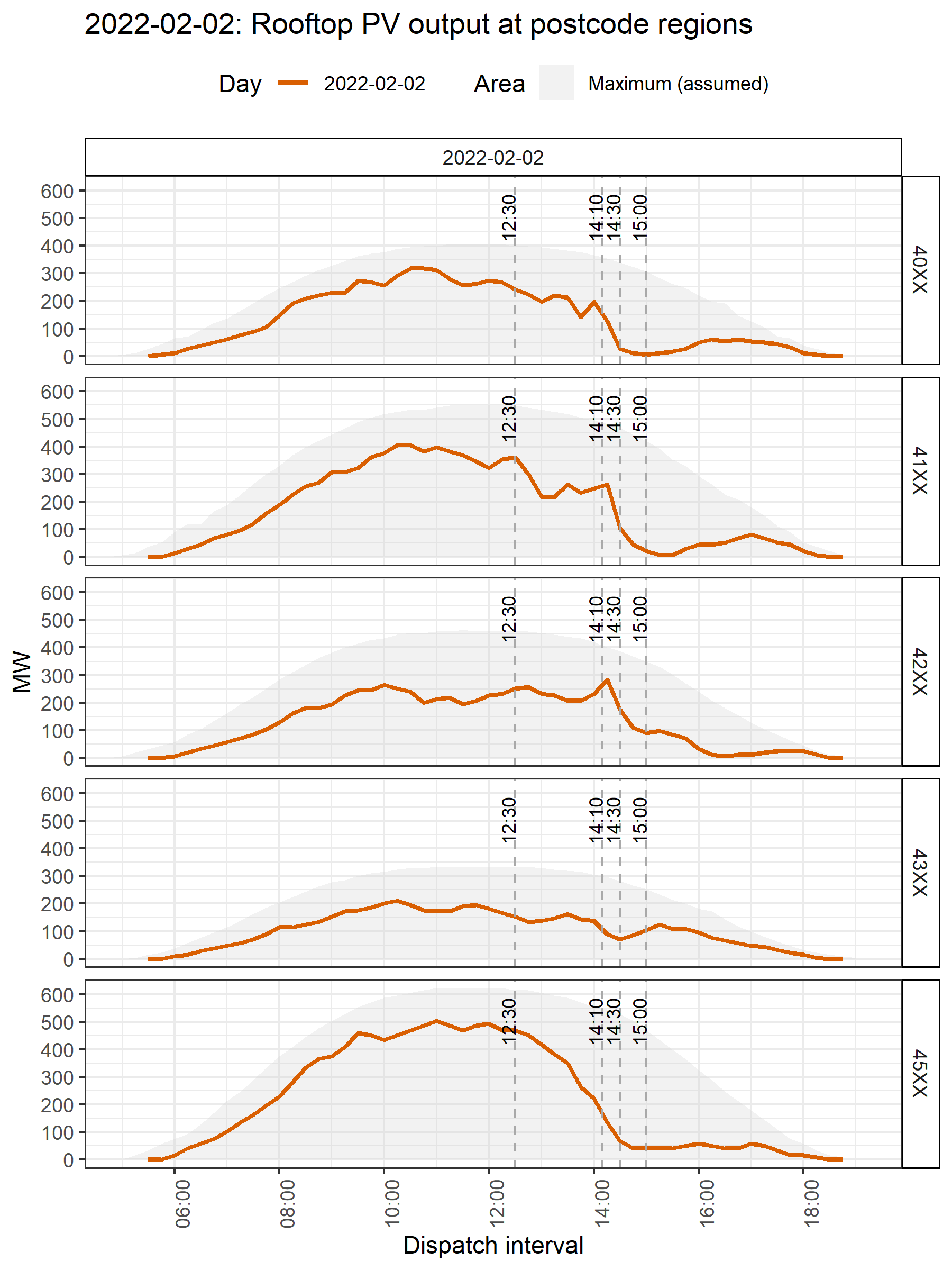 Rooftop PV output on the 2nd

Stronger clouds had already developed by 14:10 to impact Brisbane (40XX) and Logan City (41XX), and were continuing to impact north of Brisbane (45XX). A large storm cell was positioned to the west of Brisbane, within region 43XX over Ipswich. 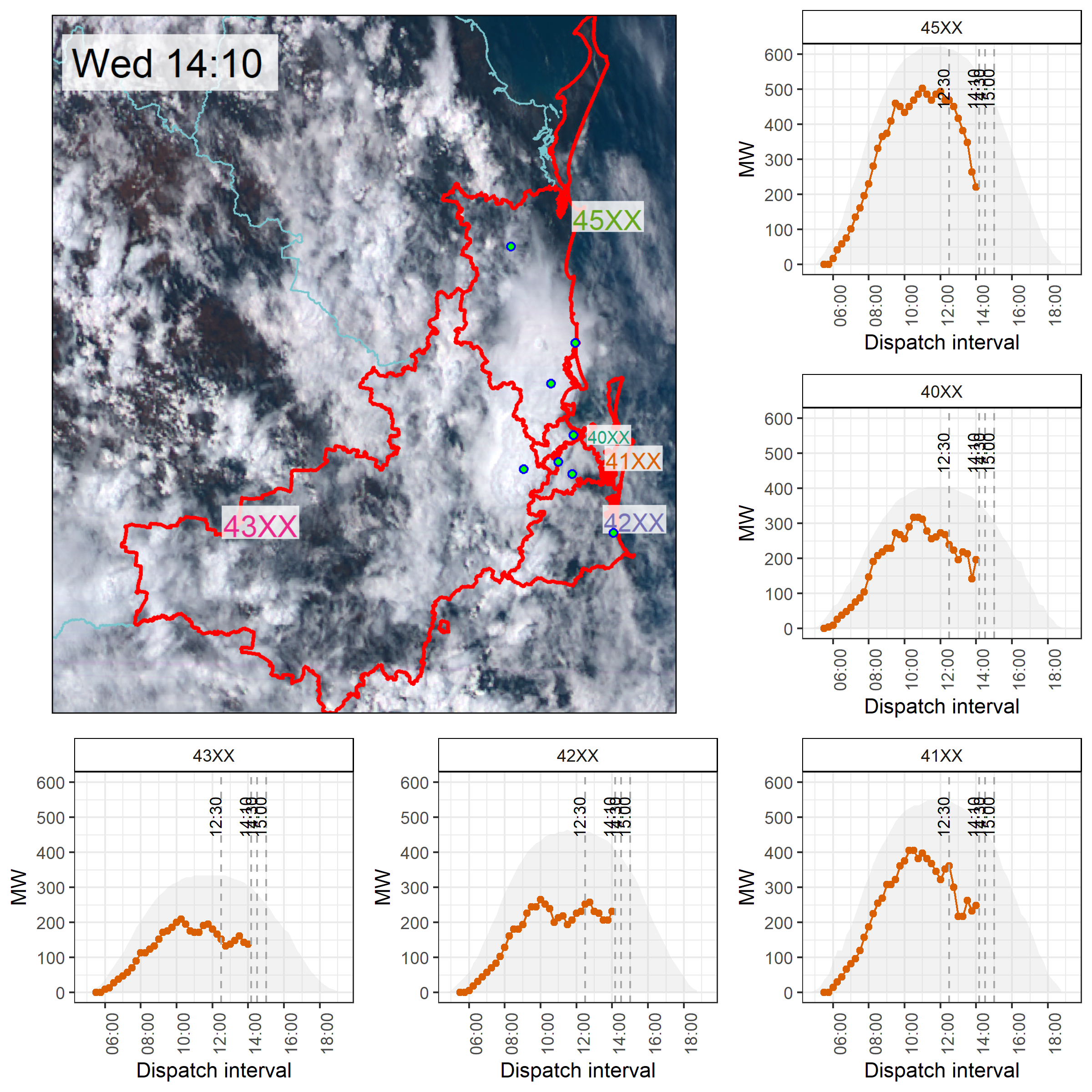 Clouds had continued to strengthen over region 45XX and 40XX, and were extending over 41XX and 42XX. The storm cell that was over Ipswich had moved eastwards – output in the north Brisbane region had dropped to levels not seen since 6am that day. 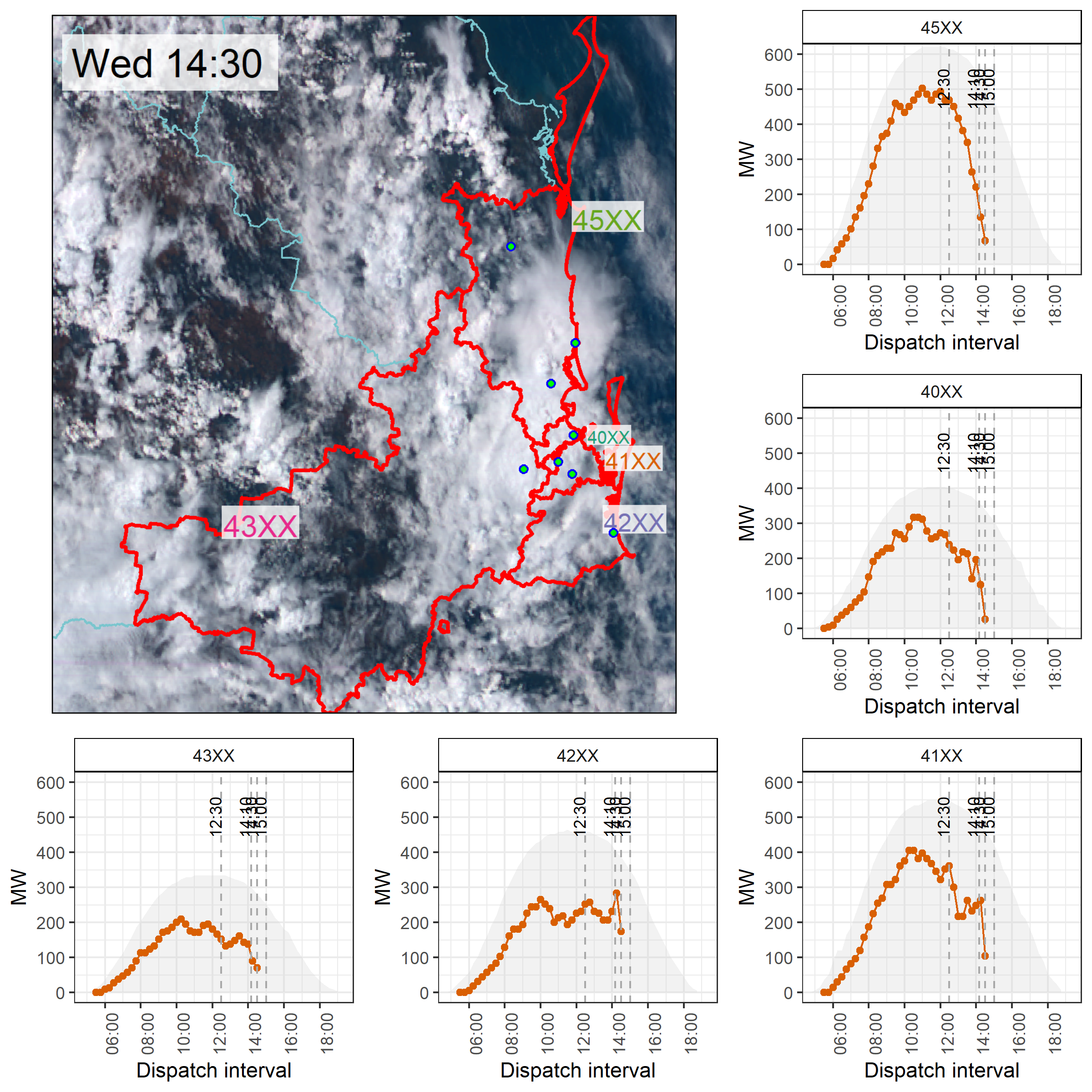 By 15:00 the clouds had developed further over much of Brisbane, to the north, south and west.

Rooftop PV output around Brisbane and Logan City and in the north through Caboolture and Caloundra was reduced to near-zero levels and this had taken roughly 45 minutes only. 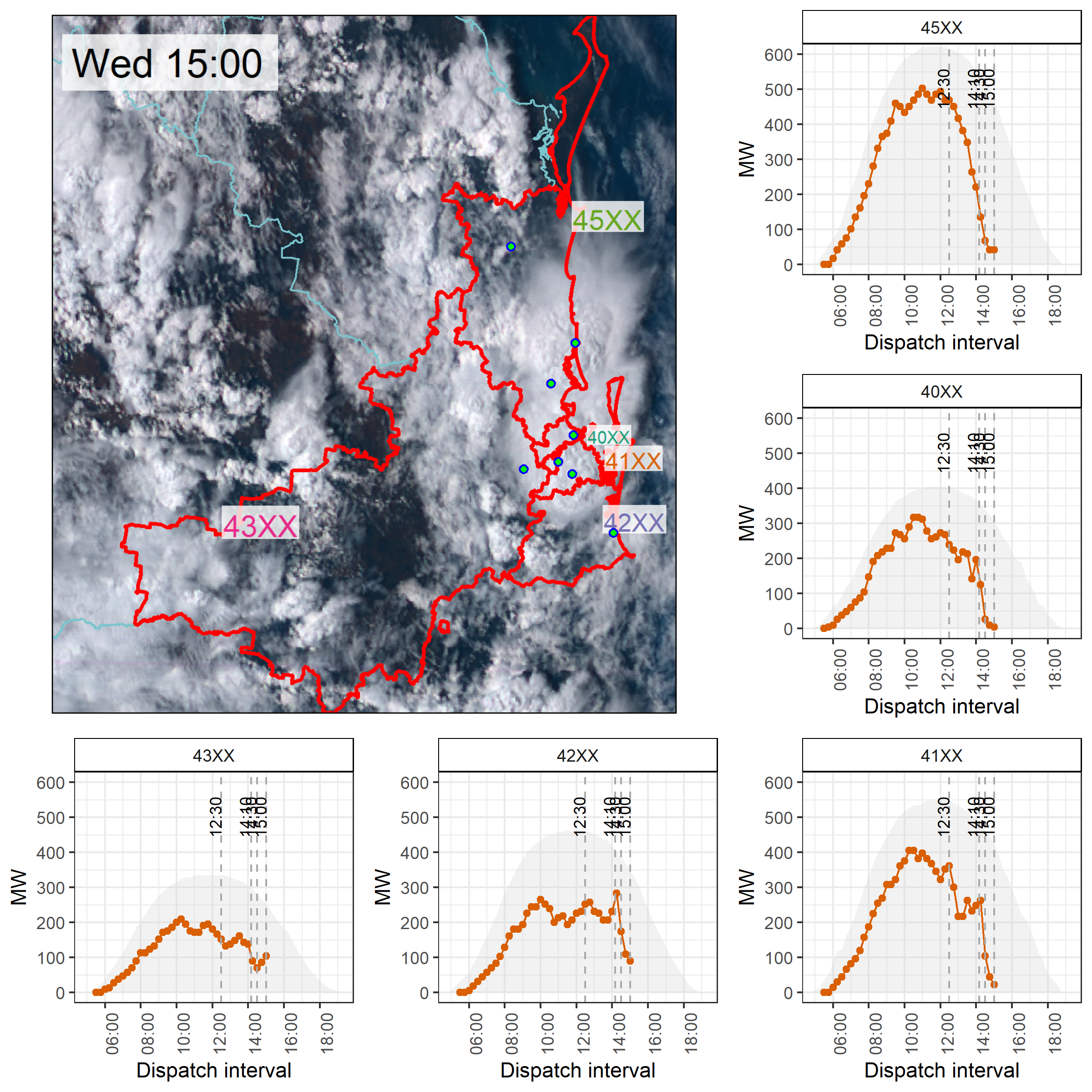 By 16:40 cloud coverage was extensive over most of the affected postcode regions. A gap in the clouds is visible to the west of Brisbane, in region 43XX approaching Ipswich.  Later, this gap liberated some sunshine over Logan City, for a short period around 17:00. That led to rooftop PV output increases but the increases were short-lived and relatively small given the sun was setting. 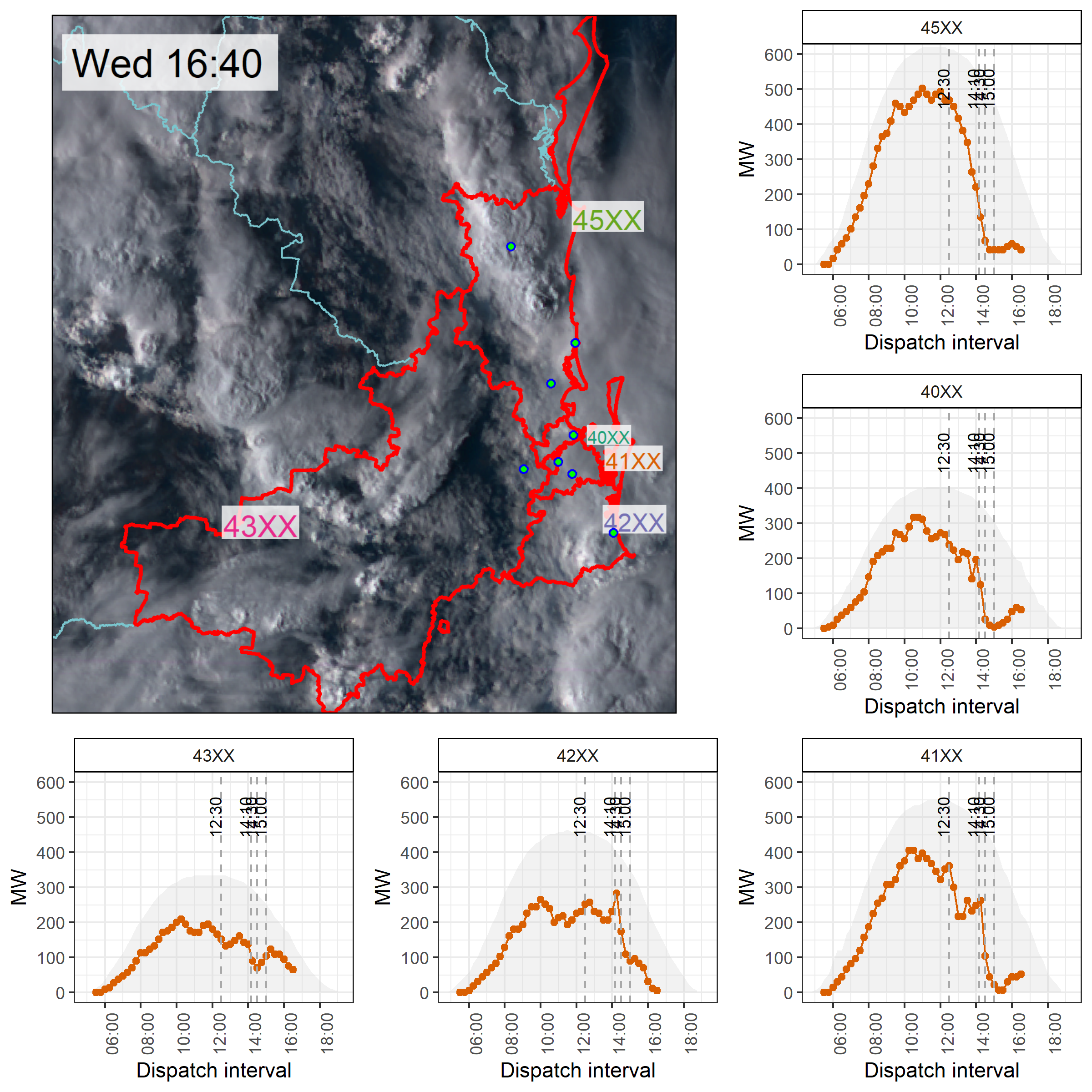 Having seen how rooftop PV varied in the presence of clouds on Tuesday and Wednesday, and noting from Part A how rooftop PV reductions preceded cooling on the Wednesday but not on the Tuesday, it appears that accounting for rooftop PV in demand forecasts has an additional level of nuance to it. If we note the direction the clouds may evolve in, we can consider the impact of two general situations that I describe in the figure below:

It was Professor Paul Simshauser’s (CEO Powerlink Queensland) presentation at the Queensland Energy Club on Wednesday 16th February 2022, where he brought this to our attention and referred to it as the “Russ Christ effect”. 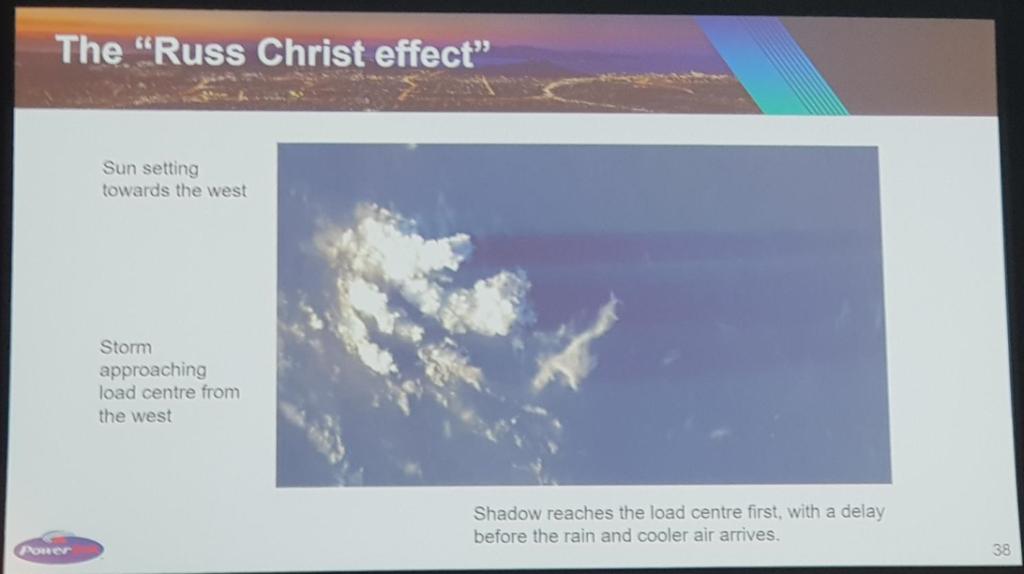 Using the example below, at left: When the sun is in the west (afternoon conditions in Queensland) cloud shadows can limit solar PV output further east of where the cooling effect of the cloud (associated rain) is.

Conversely, below, right, if the cloud is moving northward along the coast its cooling and shadows have a stronger likelihood of occurring at the same time.

Can this be the reason for the 30 minute lag between rooftop PV impacts and cooling at Archerfield?

We assessed how solar farms were impacted over on the 1st and 2nd of February 2022. The following chart maps the locations of the large-scale solar generators. 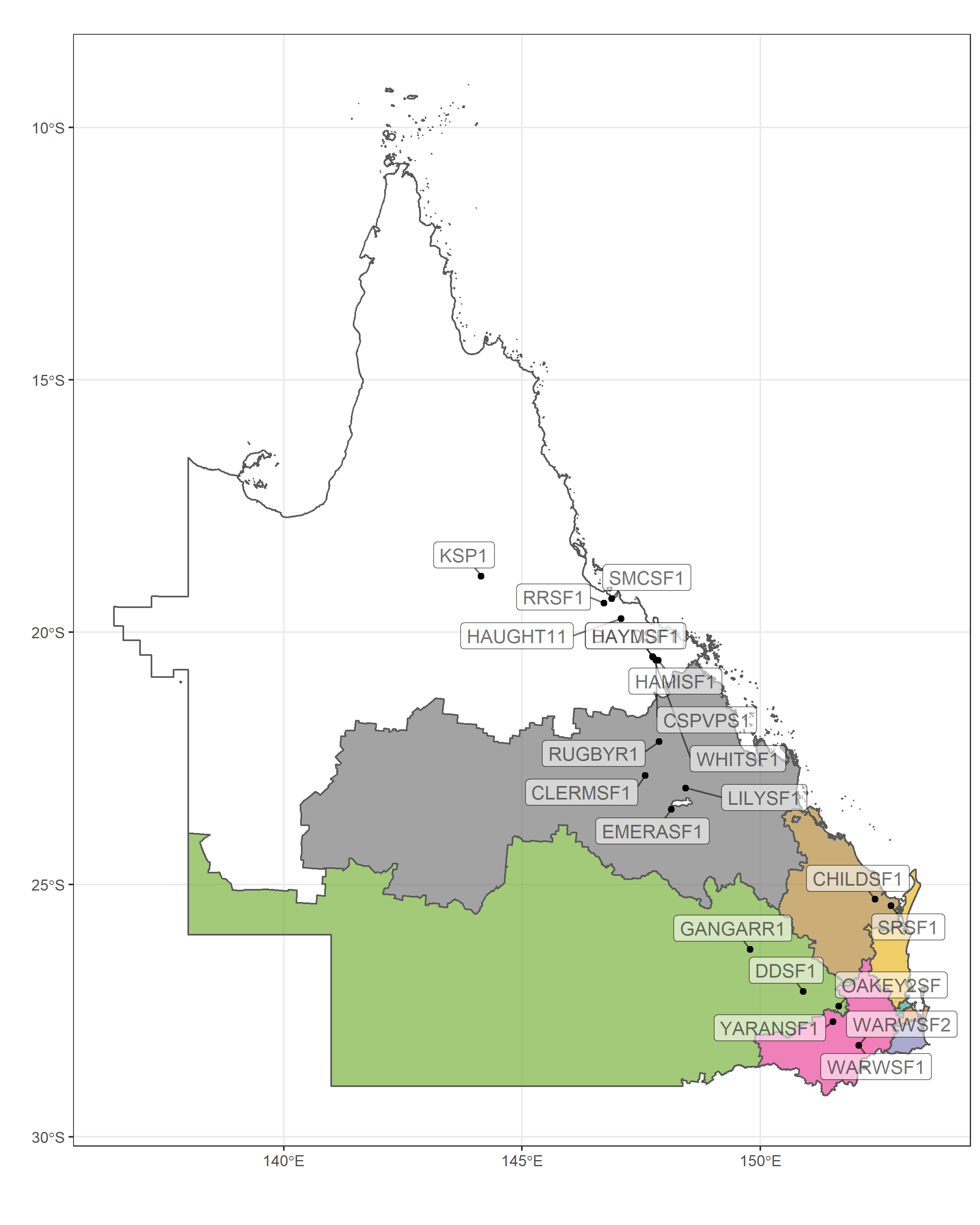 Each generator is mapped to its postcode-region so that comparison to rooftop PV output could be made. The data was normalised using maximum output from the prior 2 months.

Most large-scale solar generators are located out of the south-east Queensland. Generators closest to our area of interest include WARWSF1 and WARWSF2, OAKEY2SF, YARANSF1, SRSF1 and CHILDSF1

Before comparing generator output and rooftop PV we remind ourselves that large-scale solar output will vary for more reasons than just changing solar radiation.  Dispatch instructions (such as semi-dispatch caps that put an upper limit on output) and constraints (which also constrain output) are two of these reasons.

In the figure below, clear differences in the shape of the power output are visible, relative to rooftop PV. For example:

Output variability is greater than rooftop PV, which expected given how spatially distributed rooftop PV is. In the figure below variability features include: 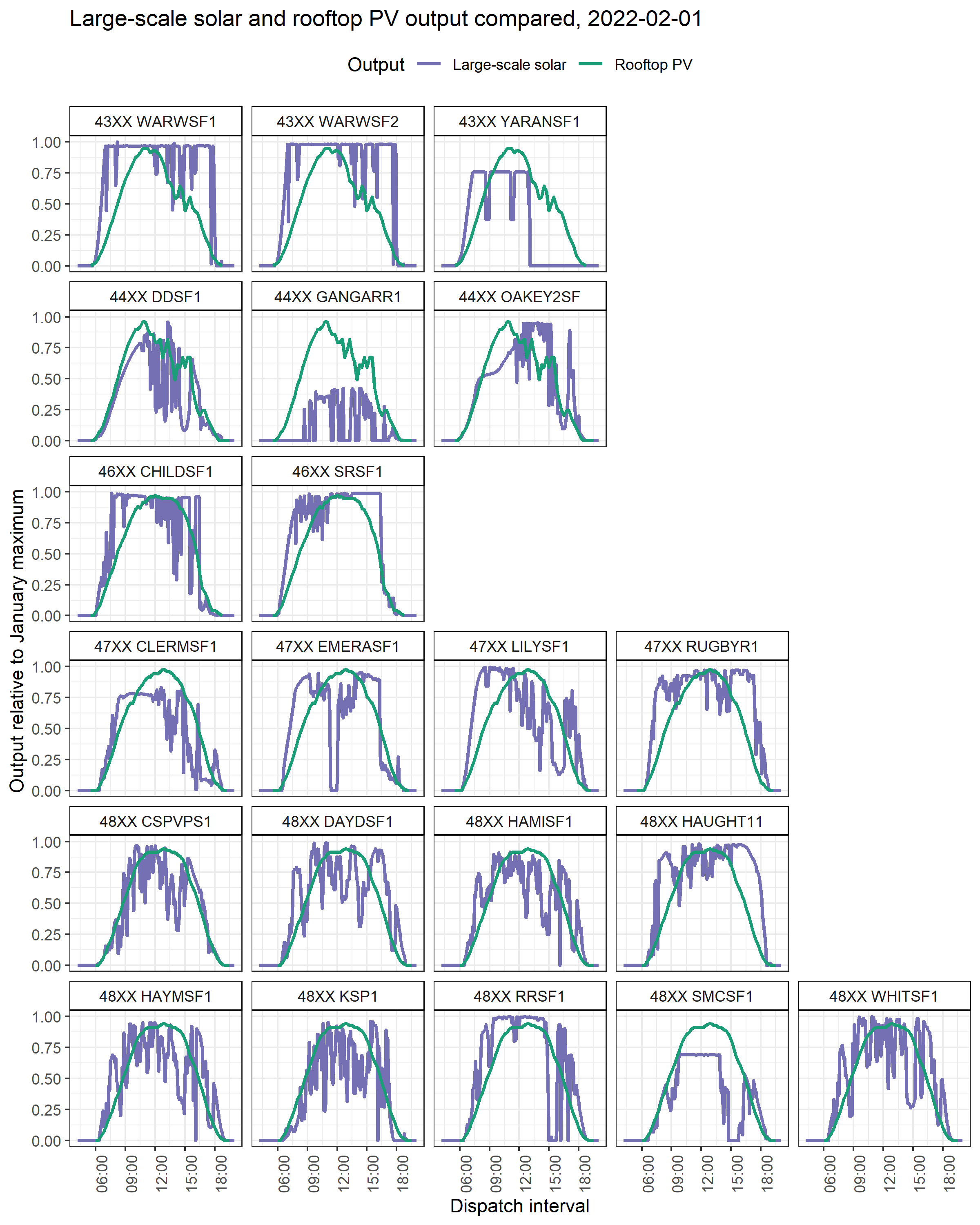 The chart below captures the following features: 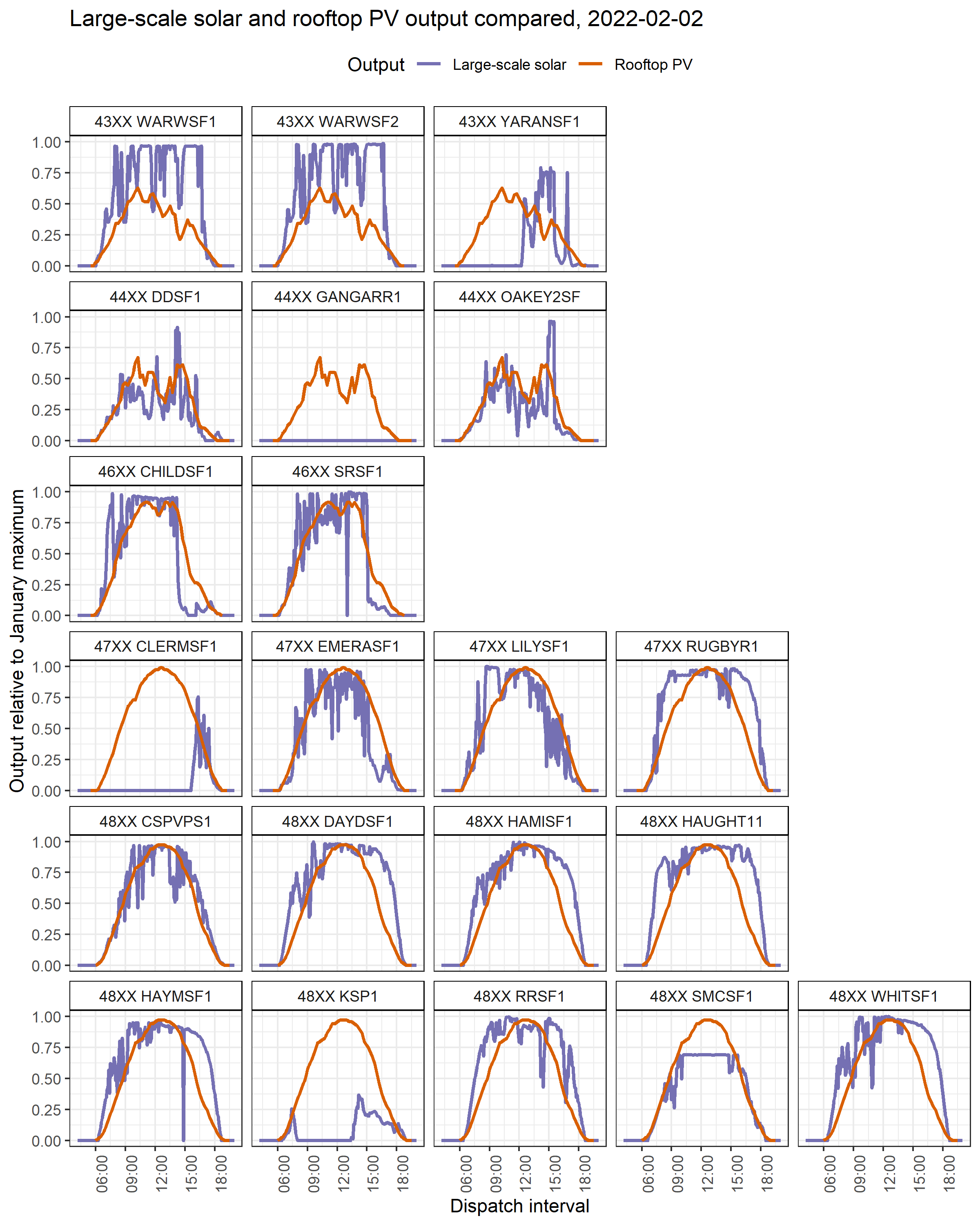 We use Wednesday 2nd to take a look at individual rooftop PV site output. For this comparison the data is normalised relative to the level of installed capacity.

Rooftop PV output from 4 sites (a selection from more than 30, data courtesy Solar Analytics) is compared to the postcode region estimate in the figure below.

Conditions on Wednesday led to the strongest rooftop PV output variability of the first two days in February.

Generally, an individual site’s output reflected the magnitude and timing of the postcode region estimate closely, including the timing of the steepest declines. 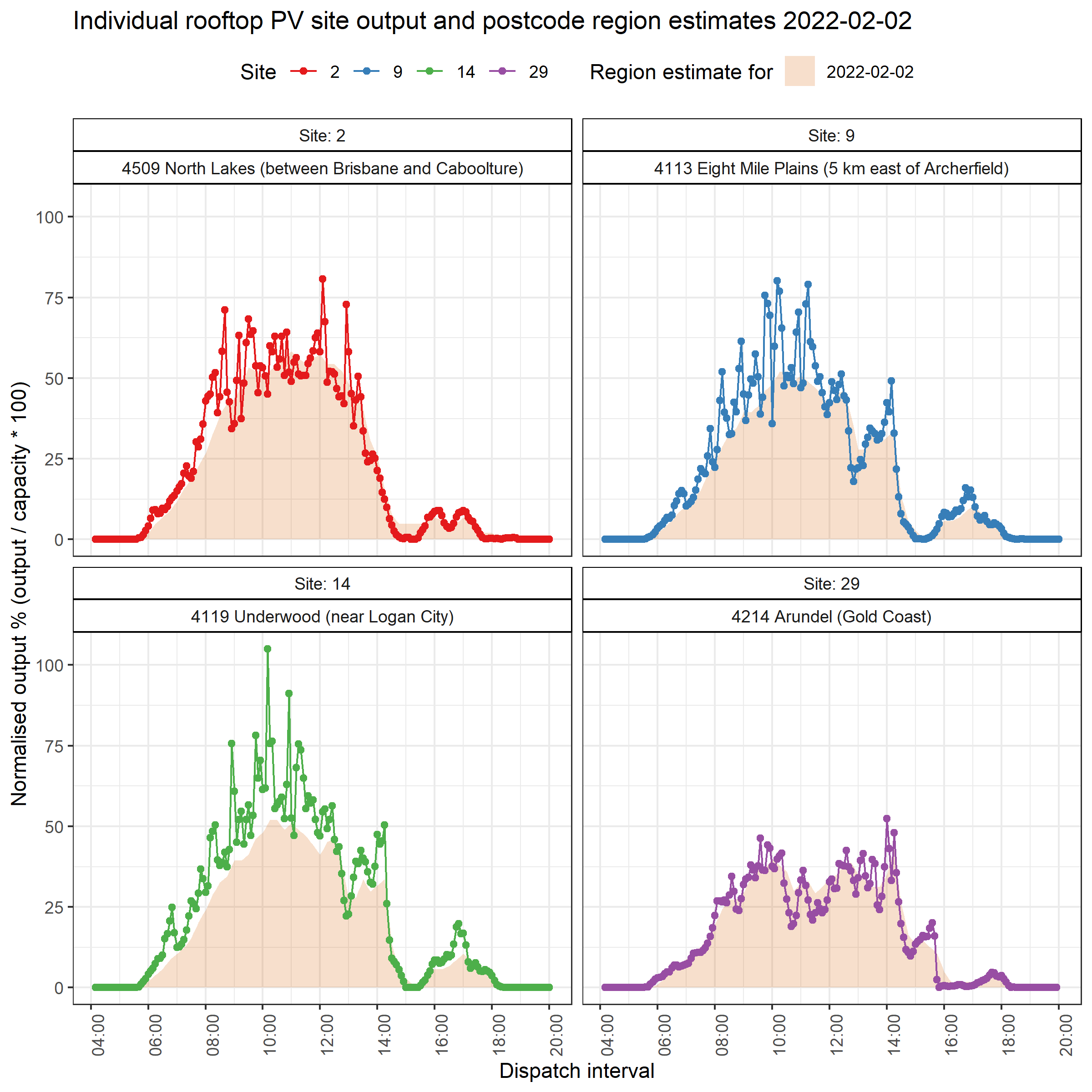 On Wednesday the 2nd individual rooftop PV site output varied from the zone estimate by 50% at times!

To recap, this assessment of sub-regional rooftop PV output on 1 and 2 February, 2022, has found: