Having looked specifically at Callide and Yallourn (coal-fired stations) on Saturday afternoon, I thought (at the time) that I might as well use the same ‘MT PASA DUID Availability’ widget in ez2view to have a look more broadly at how the performance of the broader fleet of generators has been tracking against expectations provided at the start of Quarter 2 (i.e. last run 18:00 on Wednesday 31st March 2021).

I started to do this back then but did not get finished … but thought I would quickly throw together the snapshots I’d taken on Saturday afternoon to share with you now.

1)   Readers should note that in the discussion below ‘now’ should mostly be read as applying Saturday afternoon (i.e. when the snapshots were taken); and

2)  These are provided below with minimal discussion (except for coal), but as something that might be referred back to later.

(A)  All coal (Scheduled) units

Earlier last week (on Wednesday 16th June) I had noted how the ‘Availability of Black Coal units has suffered through Q2 2021’ – which has been one of the reasons for the heightened volatility that we’ve seen through Q2 2021.

1)  Time permitting, valued guest author Allan O’Neil will be having a closer look at some of the other factors as well.

There are currently 48 x remaining coal units in the NEM … 38 of these black coal in NSW and QLD, plus 10 x brown-coal units in VIC.  We’re part-way through a deeper dive into how availability performance has changed over the past 2.5 years since we released the GRC2018 in the up-coming issue of GenInsights21 and will look forward to sharing a lot more there. 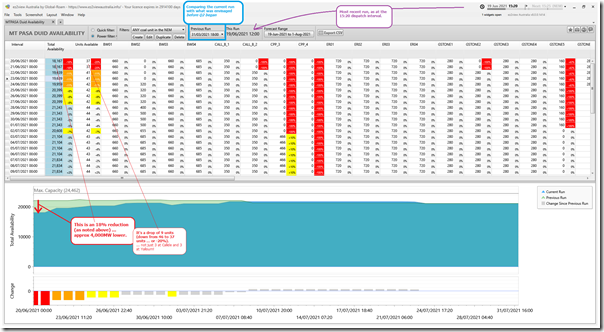 As noted earlier, you won’t find this widget (and other new ones) in ez2view version 7 (the legacy version – that we’ll be switching off for Five Minute Settlement on 1st October 2021).

Observation 1)  For the first two days shown in this current run (i.e. Sunday 20th and Monday 21st June) we see the current run has an expected available generation capacity that’s approximately 4,000MW lower (i.e. am 18% drop) than what was forecast at the end of Q1;

Observation 2)  Which equates to 9 units fewer in service:

(B)  All gas (Scheduled) units

I then thought it would be of interest to flip the view and explore all gas-fired units in the NEM, and specifically changed outage expectations: 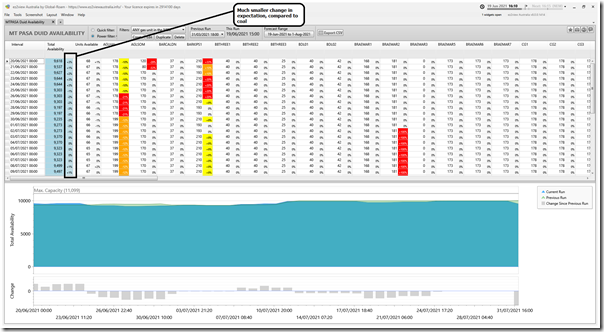 Observation 3)  As we can see, there’s not been as large a change in expectations – at least in terms of Available Generation.

3a)  Note that this only shows expected availability, not how the units would bid, or how they would be dispatched.

3b)  For instance, units manage any energy constraints (e.g. availability of gas) in how they bid. 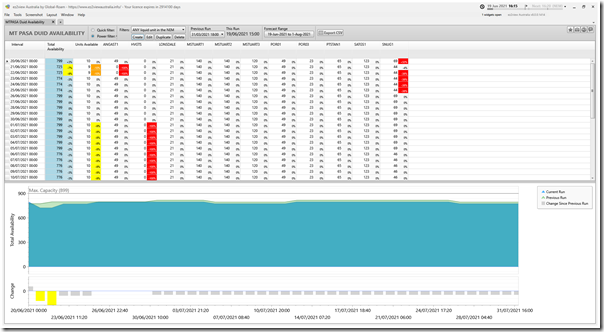 Observation 4)  In percentage terms, the change in expectation for Availability of Liquid-Fuelled plant is lower than it is for coal.

Here’s a view for all of the hydro plant in the NEM: 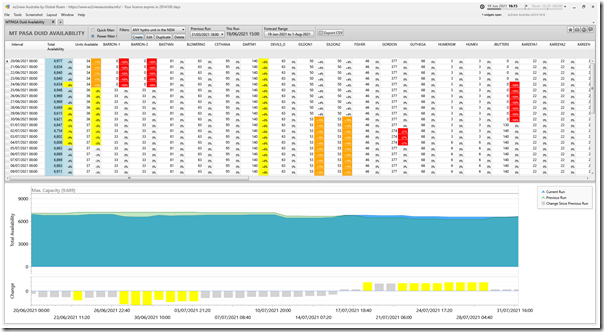 Observation 5)  In percentage terms, the change in expectation for Availability of hydro plant is lower than it is for coal.

5a)  As for gas (and liquid) worth noting that this shows expected availability at any price;

5b)  In particular, hydro units use bidding behaviour to manage energy constraints (limits on available water in storage).

Here’s a view for all 5 existing battery units. 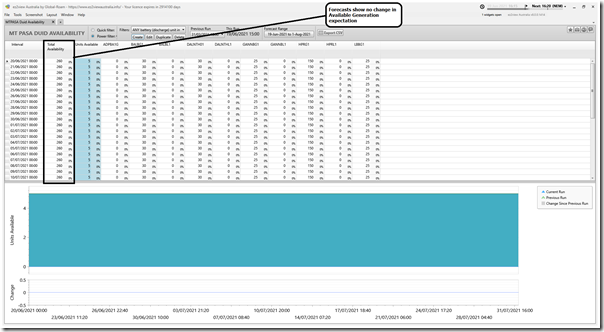 Observation 6)  There is zero change in expectations!

6a) In the 12-week look-ahead shown in the window, the forecast availability sits at 260MW and does not change

6c) Indeed, in zooming out (not shown here) for 3 years into the future there is no dip shown, and no change in expectations.

Now, before we start down the path of ‘batteries being magic wands‘ I thought I would take a closer look, as something did not intuitively make sense with this….

So I looked historically at ‘Daily Maximum Available Generation’ for batteries (with this query) in NEMreview v7 to see a more nuanced picture compared to the idealised view above: 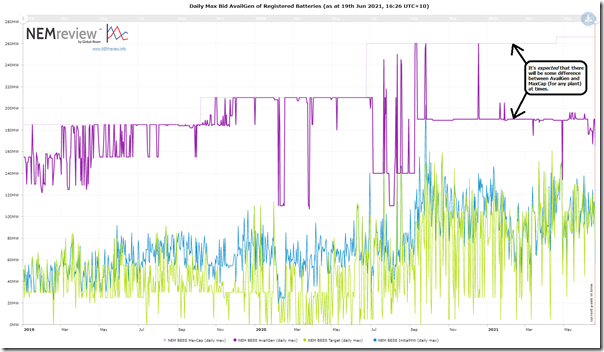 7b)  I’ve not got time to delve into this (may well be to do with ‘State of Charge’) but just added here as a caution to reading too much into the figures bid by the batteries into MT PASA.

Moving onto the Semi-Scheduled units, starting with Wind Farms, we unfortunately are all a victim of ‘the Invisible Man‘ here: 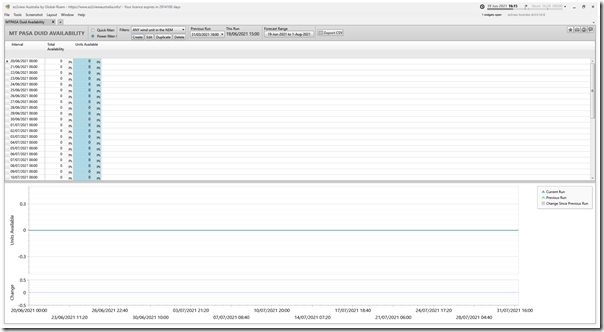 As noted in this coincident article today, it’s great that AEMC passed a rule change largely approving what had been suggested by ERM Power in their rule change proposal (with clients now benefiting from the ‘MT PASA DUID Availability’ widget in ez2view, for instance) … but why, oh, why, did the rule change not also extend to Semi-Scheduled assets?

Seems to be a sort of ‘shoot self in foot’ instance that does not really reflect where the market is headed for the future?

We see ‘the Invisible Man‘ also at work for Large Solar Farms … as if they will never have to undergo scheduled maintenance? 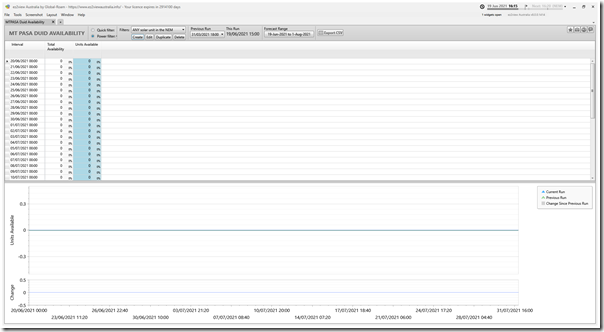 Prompted by the recent AER Issues Paper (submissions on that due today – Friday 24th July) but also aware that I’ve not yet published some broader thoughts in response to the ESB’s requests for input into their Discussion Paper on the Two Sided Market concept, I’ve posted some further thoughts. These have been informed by a longitudinal analysis of Aggregate ‘Raw Off-target’ values across all Semi-Scheduled plant.

About ERM’s two rule change proposals in at the AEMC

This morning the AEMC has published its final rule focused on clarifying how Semi-Scheduled generators should follow dispatch targets – including in dispatch intervals where prices are negative, and some had been unexpectedly switching off.