On Thursday last week (8th July) I noted that Callide C4 would delayed by another 6 months in return to service (to return to service on 1st December 2022).  In that article I had reiterated the expectation that the nearby Callide C3 was expected to be back online sometime Friday 16th July.

That expectation was still the case on Saturday during the way when I looked …. however something changed after that point.

Five days later (Tuesday 13th July 2021) it looks like Callide C3 is now not going to return until Wednesday next week, 21st July 2021 – as we can see here in this morning’s snapshot from the ‘MT PASA DUID Availability’ widget in ez2view this morning at 07:05: 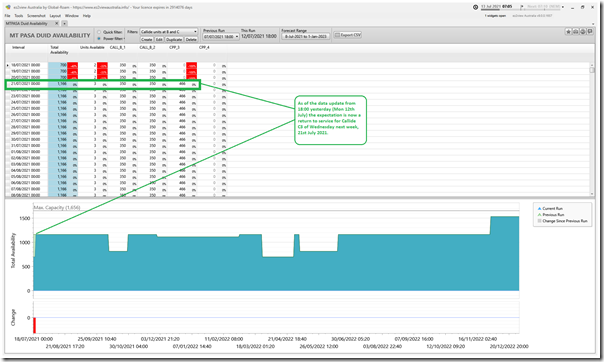 With the use of Time Travel within ez2view it becomes apparent that this change in expectation was announced by the AEMO in the data update for 18:00 yesterday (Monday 12th July).

(A)  Repeated slippage of return to service date

Frequent readers at WattClarity® would understand that this is not the first slippage of the return to service date for the unit that tripped at the time of the Callide C4 Catastrophe on 25th May 2021.  That’s 7 weeks ago this afternoon.

Some of them have been documented in prior articles here, such as:

1)  On Tuesday 1st June (i.e. 7 days after the explosion) the AEMO had been informed that Callide C3 was expected to be back in service on Tuesday 22nd June

3)  On 16th June, the expectation was still Saturday 3rd July

4)  On 19th June, the expectation was still Saturday 3rd July

(B)  Has Callide C3 been damaged in some way?

That represents a fair bit of slippage in a return to service date, over several increments:

1)  Initial expectation was that it would be offline for 4 weeks (a lengthy enough period that used to be considered a tight timetable for ‘major’ maintenance outages on units like the B units); but now

2)  If the current expectation holds true (which recent history suggests is not guaranteed) that will mean that the unit will have been out of service for 8 weeks + 1 day (i.e. over double the length initially expected).

My sympathies extend to the CS Energy and Intergen people who are probably stressed to the max trying to get the unit back, as quickly (but as safely) as possible.  Given the absence of other information, I am increasingly wondering if these delays are:

Scenario 1)   just due to ‘abundance of caution’ for work teams in relation to what’s going on at the closely situated but incredibly complicated situation at Callide C4; or

Scenario 2)  whether Callide C3 copped some collateral damage that is proving more complex to repair than had been initially expected?

At the point when I published this, I can’t find other explanation in CS Energy’s ‘Latest News’ … nor via their Twitter feed, or via their LinkedIn feed.

Callide B2 returns to service late this morning

Callide B2 returned to service this morning after nearly a month of being offline, following the explosion and outage at the station in late May.