Back on Tuesday 1st June I noted about some delays to the return-to-service for the three serviceable Callide units (Callide B1, B2 and C3).  At that time, the expectation was that:
(1)  Callide B1 would become available to the market again today (Friday 11th June)
(2)  Callide B2 would be back on Monday 21st June;
(3)  With Callide C3 available Tuesday 22nd June.

Since that time I had not been keeping tabs on that data in the ‘MT PASA DUID Availability’ widget in ez2view, more focused on other things (like preparations for 5MS and WDRM … including navigating these three tripwires) and some distractions thrown in by broader volatility that’s been occurring through May and June (at least so far).

But I’d remembered that the first unit was scheduled to be back for the weekend, so thought I’d open up that widget in ez2view again for a quick look….

Unfortunately it’s not great news for those seeking a respite from the evening volatility (yesterday evening was one of the bigger events).

Here’s a view of the current data in the widget this morning … comparing the 09:00 data update from AEMO with the one published at 18:00 on Tuesday 1st June (i.e. the one referenced here): 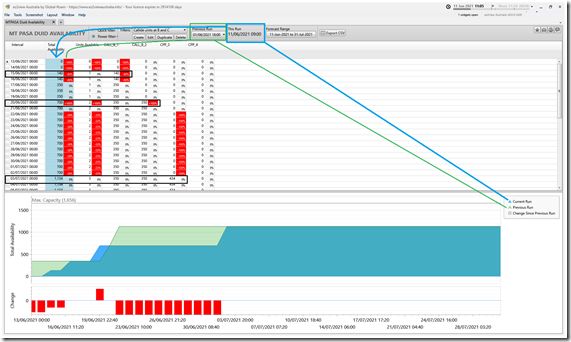 As we can see now:

2)  In some better news, looks like Callide B2 is going to be available a day earlier (on Sunday 20th June);

3)  But the return to service of Callide C3 has slipped by 11 days, now not returning till Saturday 3rd July 2021.

NEM stakeholders should be factoring the delays on these 2 units into their pricing expectations for the remainder of Q2, and into Q3….

There’s not been any update in the news section of the CS Energy website since the note on 1st June 2021 that accompanied their initial delay of the RTS (i.e. the one referenced here on WattClarity).

(B)  No change for RTS for Callide C4

Extending the look-ahead range out until August 2022, we see no change in the expected RTS for Callide C4 (i.e. Friday 17th June 2022) … but I expect there will still be a fair element of ‘wet finger in the air’ about that prognosis still, and will be for a while to come…

A first (and perhaps only – as this took longer than initially planned) walk through some of the interesting points of what happened yesterday (Sat 16th Nov 2019) when South Australia islanded from the rest of the NEM with the trip of the Heywood interconnector.

This morning we see that there’s been another slippage of expected return to service for Callide C3 – which will now have been offline over 8 weeks since the explosion at nearby Callide C4.

Return to service slips further, for Callide B2

A quick look this afternoon sees that the return to service for Callide B2 has been delayed a few days since I last looked during the week.