Last time I looked (Tuesday 29th June – 7 days ago) it was expected that Callide C3 would be returned to service this Friday, 9th July.

Here’s an updated view of the ‘MT PASA DUID Availability’ widget in ez2view snapped at 15:05 this afternoon (and filtered for just the Callide units and also the Yallourn units) showing that the return to service date has slipped another week – now out till Thursday next week, 15th July 2021: 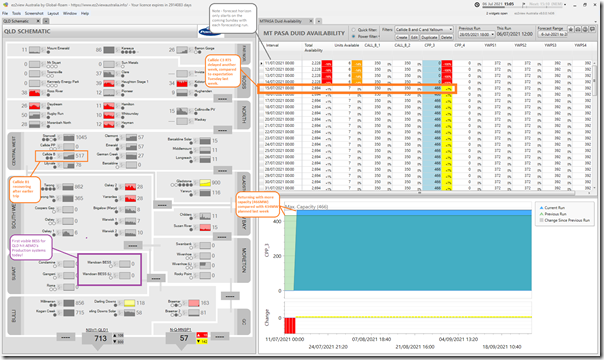 Whilst there is a delay in the RTS, I also notice that the planned capacity availability will be a little higher (i.e. 466MW compared with 434MW previously).

There was no further news update on the CS Energy website (i.e. beyond 22nd June) at this time so we don’t know more about the reason for the delay.

(B)  Callide C1 tripped earlier in the day

In the ez2view snapshot above, the ‘QLD Schematic’ widget also shows recovery of generation progressing at Callide B, after Callide B1 tripped around 10:20 this morning.

No reasons for the trip are known at this point – but I don’t think they would be related to the earlier Callide C4 catastrophe.

Also highlighted that we now have data being published by AEMO for the Wandoan South Battery (a VENA Energy and AGL Energy collaboration).

1)  As noted in in the image, this is the first visible battery for the QLD region.  There are some smaller ones already operating, but Villain #8 has meant we’ve not been able to display what’s happening with these earlier ones.

2)  Through Q2 with the major pricing excursions that followed the Callide C4 catastrophe (and also with gas prices elevated) there will be plenty of hypothetical ‘what ifs?’ about the extent to which batteries would have ‘saved the day’ … both on 25th May 2021 itself and also with the pricing outcomes that followed.  At least now we’ll be able to see how a battery in QLD actually operates!

Clients can ensure they are running the most recent version of ez2view v8 to see first output of the battery.

As per prior reports, Callide C4 is currently expected to return on 1st June 2022.

With Yallourn unit 4 back online from Friday 2nd July 2021, I could probably remove them from the query.

Normally this would be part of a much more complete article adding to WattClarity’s growing coverage of the major power system events in Queensland following the incident at Callide C Power Station. However I for one find it easier to…