A short note just now – as one I might refer back to later (time permitting).

Our SMS alerts facility (available in NEMwatch, in deSide, and in ez2view) triggered three alerts this morning for NSW dispatch prices being up at the Market Price Cap (increased to $15,100/MWh for the 2021-22 financial year). 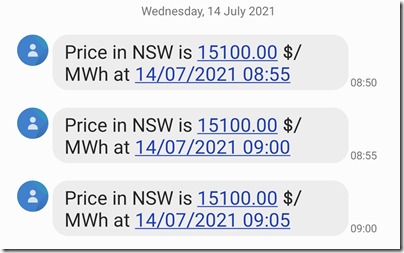 Using the ‘Forecast Convergence’ widget in ez2view this afternoon and Time-Travelling back to the 08:55 dispatch interval (i.e. when the first spike occurred) we see that this price spike occurred out of the blue: 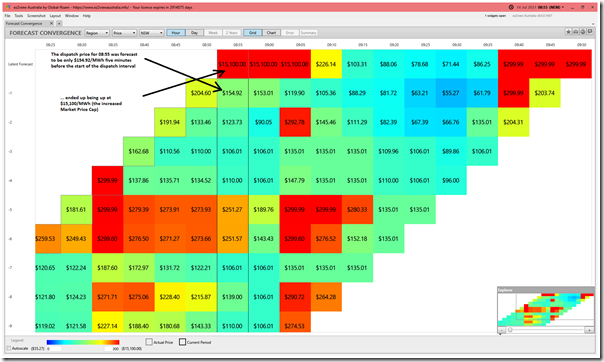 Here’s how the dispatch interval was captured in an email alert triggered by a display copy of NEMwatch v10 we have running 24x7x365 for occasions like this: 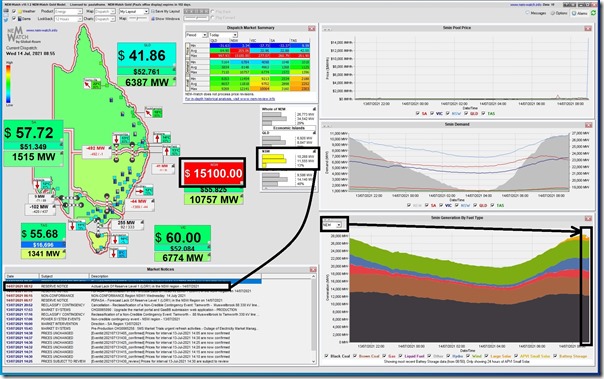 1)  The price spike well away from more ‘normal’ prices in QLD and VIC – because of constrained flows in from those neighbouring regions;

2)  An IRPM down at 13% for the NSW ‘Economic Island’ so formed by those interconnection constraints … and an ‘Actual LOR1’ Low Reserve Condition notice published by AEMO at 08:12 (so ~38 minutes before the spike); and

3)  A solid block of green (representing wind production right across the NEM), but only the beginnings of the contribution from solar at this time in comparative terms.

Will delve further in another article in future as this was an interesting one – if time permits.

Price volatility in VIC and SA on Friday 1st March

Some quick notes about the volatility seen in the NEM on Friday 1st March 2019 – a hot day in Victoria and South Australia, the first day of Autumn.