On Saturday 19th June was the last time I looked at expected return to service dates for the Callide B and C units.

At that time (referencing the ‘MT PASA DUID Availability’ widget in ez2view with the most recent AEMO data run being 12:00 on the day) it was expected that Callide C3 would be back online during Saturday 3rd July 2021.

Two days ago (on Sunday 27th June) I noted that Yallourn unit 2 had restarted.

I saw that Angela Macdonald-Smith had referenced that note in writing ‘Third Yallourn unit back online amid ongoing flood crisis’ yesterday in the FinReview.

Also in Angela’s article was the comment that Callide C3 was expected back on Friday 9th July 2021.  So I thought I would have a quick look with an updated snapshot from the ‘MT PASA DUID Availability’ widget in ez2view: 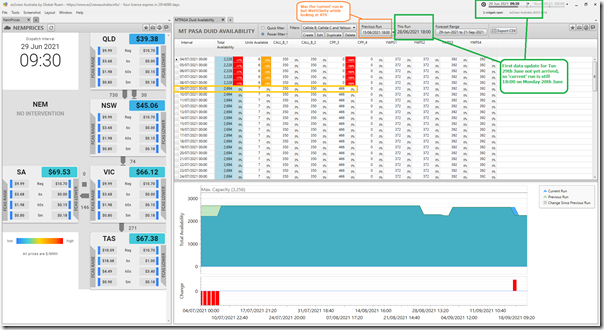 You’ll see I have modified the query to show the Callide units and the Yallourn units.

The data has not yet updated for the first data set this morning – so we’re looking at ‘current’ data being published for 18:00 yesterday (Monday 28th June).  At that time, the expectation was that the unit would be back Friday 9th July.

1)  Later than had been the expectation on 19th June; and

2)  In line with what Angela wrote yesterday .

Comparing between different runs, it appears the change in expectation was made between 12:00 and 15:00 on Tuesday 22nd June 2021 (i.e. 7 days ago).  Was not available to write an updated article until now.

In scanning the grid (earlier times) I notice that the current expectation is that Yallourn unit 4 is expected to be back tomorrow, Wednesday 30th June – last day of an eventful Q2.

Also today I see the publication of this ‘EnergyAustralia statement on the Yallourn mine – 29th June 2021’ which notes:

“Meanwhile, three of four generating units are currently operational at the Yallourn power station, which is the result of daylight dozer-push mining activity resuming in the Maryvale mine on Friday 25 June, following detailed risk assessments and consultation. Short-term repairs on the MRD are expected to be finished this week.”

(C)  No change in RTS expectation for Callide C4

Extending the time-range out, we see that the scheduled return to service for Callide C4 is still sitting at 1st June 2022: 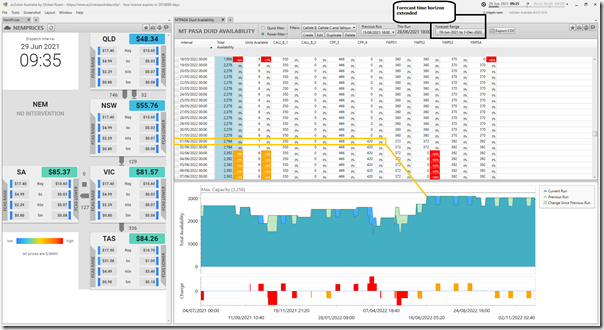 … though, as noted before, there’s probably still an element of ‘wet finger in air’ about what this particular date will be, at this time…