As the event unfolded yesterday evening, and I was piecing together an initial view of what was happening (as Part 2 in this series), my thoughts were understandably dragged back to the inundation of media coverage, and other chatter, that had followed from EnergyAustralia’s (somewhat) surprise announcement on Wednesday of the (earlier than expected) closure of the Yallourn Power Station in Victoria.

In particular I was reminded that (on Thursday 11th March) in the Australian, Perry Williams wrote ‘Energy Security Board warns more coal power stations face closure’ – and, in doing so, quoted my article on Wednesday as highlighted below: 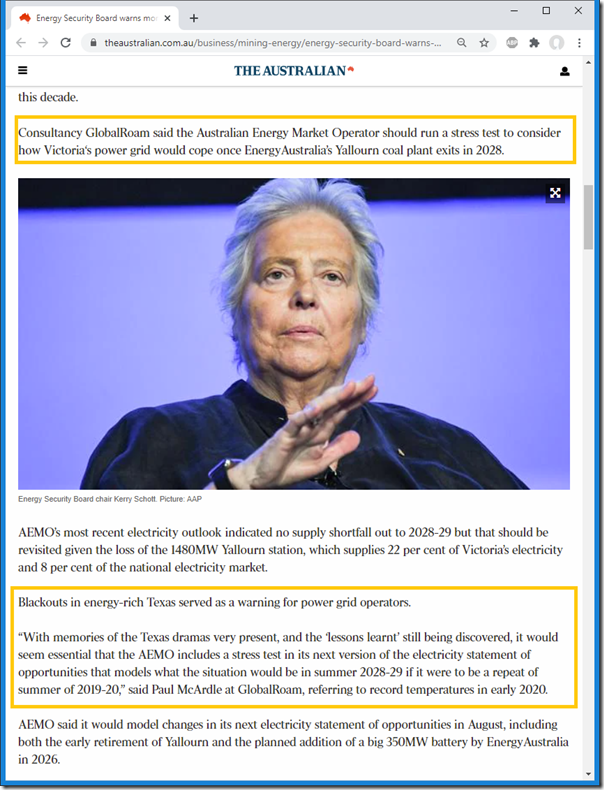 Whilst it was understandable that a journalist might pick up my suggestion that AEMO runs a Stress Test in the 2021 ESOO, I did see that Perry had unfortunately missed what I saw as the second key factor in the necessary stress test:

For me it’s important that the Scenario to Stress Test incorporates both factors simultaneously:

Factor 1 = extreme levels of demand, such as what Victoria experienced on 20th December 2019 including the high-temperature technology limitations; in addition to

Factor 2 = the disruptions that would have resulted had the bushfire induced trip of the main VIC-NSW interconnector on 4th January 2020:

2a)  As it happened on 4th January the lack of support from VIC impacted on NSW outcomes (because that’s where the high temperatures were experienced at the time);

(i)  what would happen in Victoria
(ii)  without Yallourn and no support from NSW,
(iii)  but with access to whatever new supply options might be added to the mix prior to the closure of Yallourn.
… and hence provide a clear picture of their self-sufficiency under such an extreme scenario.

Whilst such a ‘High Impact, Low Probability’ (HILP) Scenario may not fit within the prescriptive method for the calculation of Unserved Energy to meet the 0.002% USE Reliability Standard (or its lower Interim Standard sibling) it does seem very sensible to run such a HILP scenario in a later section of the ESOO to help people get some sense of what the scale of the pain would be ‘if the shit hits the fan’ (so to speak).

It should be obvious, I hope, why such thoughts were occurring to me at the same time as I was trying to piece together what was happening in South Australia?

That’s because (it’s highly likely that) one of the biggest drivers for the price volatility seen in South Australia on Friday 12th March 2021 was the significantly reduced amount of support that could be imported from Victoria (because of the repairs to the damaged Heywood interconnector).

The NEM is fast becoming a place whereby:

1)   it’s very, very difficult to schedule and carry out critical Network Development (and Maintenance and Repair, in this case) work because of the increasing reliance on support from elsewhere, and multiple aspects of the weather, and so on; and

2)  it’s also going to mean that an unexpected failure/outage on any key part of the network ratchets up the level of risk considerably.

As noted all those months ago in the Generator Report Card 2018, the level of risk in the NEM is increasing:

As we come closer to committing to complete an update of the 180-page analytical component in the GRC2018 (to complement the recently released GSD2020), it’s highly likely we would (as part of that process) explore various ways that the level of risk in the NEM has continued to increase almost 2 years later…

A week ago (Thursday 21st Jan 2021) we received an email from AEMO following the publication of Draft Guidelines for the Wholesale Demand Response Mechanism. We share some thoughts here today.

The AEMO published an update to their 2021 ESOO today (Thu 14th April) following some ‘earlier closure’ announcements for Eraring and Bayswater, which also gave the opportunity to study other developments. Here’s some quick thoughts.