Given what’s been happening with the ‘2022 Energy Crisis’ and earlier coverage here … particularly through the Administered Pricing and Market Suspension beginning 12th June 2022 … we thought it would be useful to publish this article for future reference.   Of particular interest to us (as it will be to many) are the variety of factors that AEMO flags as contributing to the extremes of price outcomes (which we’d earlier reviewed for Q2 2022 here).

A quick review of an embargoed copy of the QED reveals a number of factors:

In the Executive Summary of the QED (at the bottom of p3/66) the AEMO writes:

‘Key factors underlying the extraordinary rise in wholesale prices in Q2 included:
– The impacts in local fuel markets of extremely high international prices for traded gas and thermal coal.
– Reduced availability of coal-fired generation, due to scheduled maintenance as well as long- and short-duration forced outages, driving high levels of gas-fired generation, which both raised electricity prices and put pressure on local gas markets.
– Physical fuel supply and hydrological constraints at a number of thermal and hydro generators which further limited their operational flexibility.’

It’s likely that much of the commentary that follows will zero in on these various factors – which I have re-ordered as follows:

(A1)  Reduced availability of coal-fired generation

‘While Q2 typically sees higher levels of seasonal planned maintenance on thermal generation units in preparation for winter (Section 1.3.1), unplanned outages of coal-fired units clustered at different points in the quarter, reaching highs of around 3.6 gigawatts (GW) in late April and then in the second week of June peaking at 4.6 GW leading into the period of administered price capping and market suspension (Figure 18).

On p17/66 the AEMO writes about these for both coal and gas units as follows:

1)  About Coal-fired units, the AEMO writes:

‘During the quarter some black coal-fired generators reported difficulties sourcing sufficient volumes of coal to generate at desired output levels, principally due to under-deliveries from key suppliers.  Arranging alternative coal supplies can be logistically challenging or even infeasible at short notice. This increased reliance on other, often higher cost, generation sources.’

2)  About Gas-fired units, the AEMO writes:

‘Tight supply-demand balance in the east coast gas markets was also a limitation on fuel quantities available to gas-fired generators. As an extreme example, on 1 June AEMO invoked the Gas Supply Guarantee due to limits on gas supply available to generators and forecast lack of reserve conditions in multiple NEM regions on 2 June (Section 2.3.3). At other times gas supply limits caused dual-fuelled peaking generators to run on reserves of high-cost liquid fuel.’

(A3)  Hydrological constraints for hydro generators

… with this chart presented as Figure 38:

While generators may contract fuel supply in advance to match their expected output range, costs for purchasing additional fuel to support higher levels of generation, or for renewal of expiring contracts, can be strongly influenced by conditions in local and export markets for those fuels.’

However it’s important to note that those four factors above were not the only factors flagged by the AEMO in the QED Q2 2022.  In a brief scan of this embargoed copy, I have seen a number of others – including these ones (added in no particular order):

In various places in the QED the AEMO notes the rapid (and earlier-than-expected) arrival of colder weather drove Underlying Demand higher than in comparable periods … such as Q2 2021, for instance.  The AEMO notes:

‘A series of cold fronts in early June over eastern Australia and extended as far as north Queensland, driving up heating demand across the NEM coinciding with record maximum demand in Queensland and spot prices rising.’

… and follows with this excerpt comes from p8/66: 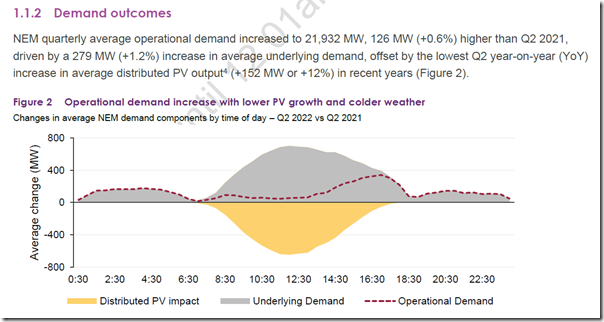 (B2)  Energy Limitations – such as protection of scarce fuel supplies, and sourcing additional fuel

Also on p16/66, when describing some impacts of the high level of coal unit outages, the AEMO notes that they had multiple compounding impacts on spot prices including:

‘•  increased the dispatch of higher-priced supply from other generators, and

‘Supply offers from gas-fired generators reflected high and rising prices in the east coast gas markets, discussed in Section 2, and the need to source additional gas in spot markets when dispatch levels increased…’

This factor was particularly visible to us when we wrote about Theory #2 in this article about ‘why capacity was withdrawn’.

(B3)  Periods of low renewable generation

On p17/66 the AEMO notes that one of the reasons why additional gas procurement was required at these high (internationally-influenced) price was:

‘due to periods of low wind and solar generation’

… with a reference to this Media Update from Energy Australia on 21st June 2022, which also notes (as one of ‘four key issues affecting electricity supply and prices’):

‘weather patterns that have meant lower generation of wind and solar’

‘A significant proportion of historically typical volatility events in Q2, where spot prices rose towards the MPC, were associated with transmission constraints which limited transfers of power between NEM regions. Figure 22 illustrates an example from early May where a transmission outage in southern New South Wales prevented northward transfers on the Victoria to New South Wales interconnector (VNI) during periods of extreme prices in the northern NEM regions.’

We wrote in our own Executive Summary within GenInsights21 that…

‘As we worked through these questions via GenInsights21, several key data points led to the identification of three key challenges at hand:

1)  Variability and Uncertainty are Increasing

… so, with that in mind, it was not a surprise to see how these four factors (and three challenges) were very much on display through Q2 2022 – with the AEMO highlighting at least eight contributing factors in the QED 2022.

If you read commentary that focuses on just one or two, be aware that those authors are just short-changing you…

Best suggestion would be to read through the  QED for Q2 2022 yourself!

Why are we completing this extensive review of what happened over a very volatile summer in QLD – and why, and what the future implications might be?

Why are we investing significant time in completing this review of what was remarkable price volatility in QLD over summer? We’re primarily a software company that develops shrink-wrapped products used by about 100 market participants, spectators and commentators.

Villain #2 – we, the voting public

My sense is that we, the voting public, are Villains #2 in running the energy transition train off the tracks.