1)   They were changed to Semi-Scheduled in AEMO’s market systems, but

2)  Remain registered as Non-Scheduled under the National Electricity Rules (NER).

We saw these changes announced through IT change notices from AEMO, and were curious to understand how much these generators were now participating in the market (especially given how they seem to be straddling ‘Non-Scheduled’ and ‘Semi-Scheduled’ obligations now).

2)   In the follow-on GenInsights21 publication, we invested considerable time in understanding how the (more recent) ‘rise of the auto-bidder’ has changed total volumes of bids received at the AEMO more recently.

Being Non-Scheduled meant the early farms didn’t participate in the central dispatch process, so didn’t bid and didn’t receive dispatch instructions, and weren’t subject to network constraints in dispatch. In an emergency or during outages a non-scheduled generator could be directed to switch off or reduce output by AEMO or the TNSP.

1)   Many non-scheduled farms avoided revenue losses in negative price periods by reducing output without notice, as they were not required or able to signal their intentions via bids.

2)  This article from Allan O’Neil explores a particularly interesting Case Study of Easter Saturday 2020 showing various different approaches by the Non-Scheduled wind farms in South Australia to some negative prices.

In contrast, a Semi-Scheduled wind farm bids into the market and receives a dispatch instruction from AEMO, which is a dispatch level (expected output), and in the case of a binding network constraint or economic curtailment, an instruction (“semi dispatch cap”) to stay under that dispatch level.   Following a deliberation initiated by the AER at the request of Energy Ministers, the obligations of Semi-Scheduled plant were clarified in this rule change published by AEMC in March 2021.

Together, these wind farms add up to 389 MW of capacity. That’s a lot of capacity that AEMO couldn’t previously control in dispatch in a region that is often at risk of separation from the NEM, where operational demand (demand served by scheduled, semi-scheduled and large non-scheduled generation) has at times fallen below 200 MW.

This is what AEMO published in its IT change notice for Starfish Hill wind farm, with similar notices for the others:

NER 3.8.2(e) states: If AEMO considers it reasonably necessary for adequate system operation and the maintenance of power system security, Registered Participants who may otherwise be exempted from participating in the central dispatch process must do so to the extent and in the capacity specified by AEMO.

It hasn’t been made public to our knowledge what the “extent and capacity specified by AEMO” means in this case, so we’ve had a look at the data. Our first thought was that they’d be subject to binding network constraints where necessary but otherwise go about business as usual, including reducing output without bidding during negative prices.

1)  This isn’t what we see – instead they look as semi-scheduled as any of the semi-scheduled wind farms in how they’re submitting daily offers and rebids.

2)  Additionally, in the causer-pays factor calculations AEMO has now put these units in the “scheduled and semi-scheduled” category.

This change doesn’t come without cost. Technical work was needed by the wind farms, to update SCADA signals to AEMO and to install systems to process dispatch instructions, and market-facing work to develop processes for bidding and understand the operation of constraints. There is also a revenue impact, with these wind farms now being included (so potentially curtailed) not just in constraints typically applied in emergency conditions but in system-normal constraints, including the system strength constraints such as S_NIL_STRENGTH_1 that have at times deeply curtailed SA wind and large solar generation in the last few years.

Looking at the bids in ez2view’s Bids and Offers widget we can see that four of the six farms have bids above the floor to manage negative prices, and three are actively rebidding to manage negative prices and constraints. Two appear to have (two weeks in) a ‘set and forget’ bid at the market floor price, though one of these (Wattle Point) has an unusual ramp rate bid.

The energy price in South Australia was negative for most of the daylight hours on 11 February 2022, including below –$89 for an hour between 9 and 10 o’clock. Let’s see who responded. 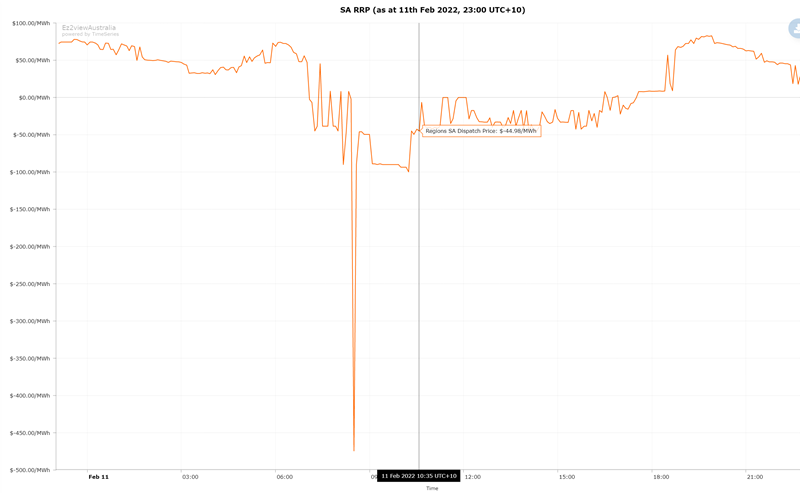 First, an explanation of what’s shown in this chart. The red line is the dispatch availability, which goes up and down with the wind. The black line is the output. The faint grey line is the dispatch level. The background colours here show the bids – with light blue a bid at the floor, and the darker blue in the chart below a bid between –$99.99 and –$0.01. 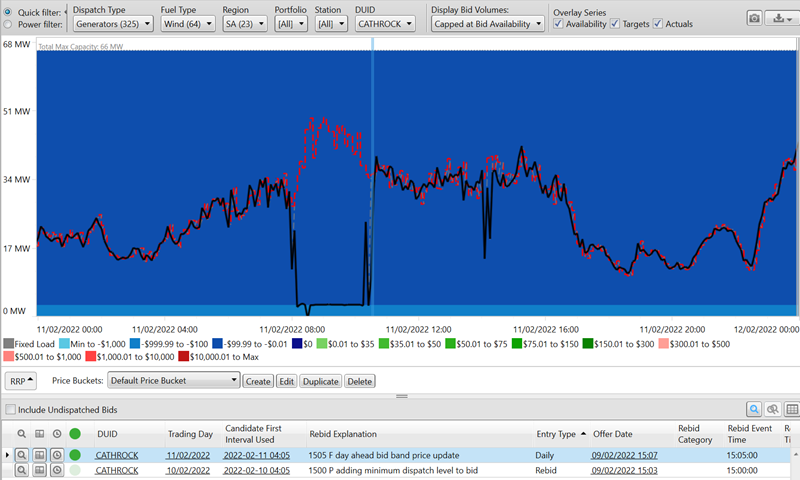 With most of its capacity bid at –$44.98 (all bid bands adjusted to the regional reference node), Cathedral Rocks was dispatched close to zero during the negative price periods (see the black line in the middle of the chart dropping down), and even set the price at 10:35 to –$44.98 (see price chart above). 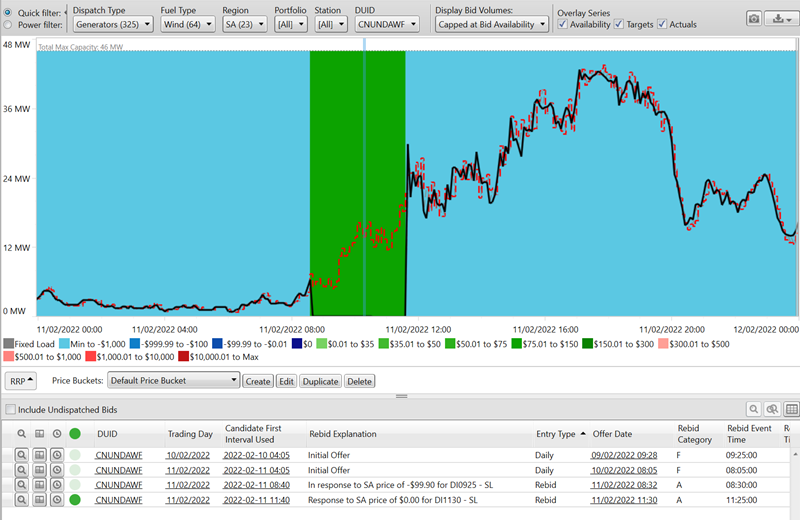 Canunda rebid its capacity from the floor (-$1,000) to $100 during the negative prices, thereby being dispatched to zero. 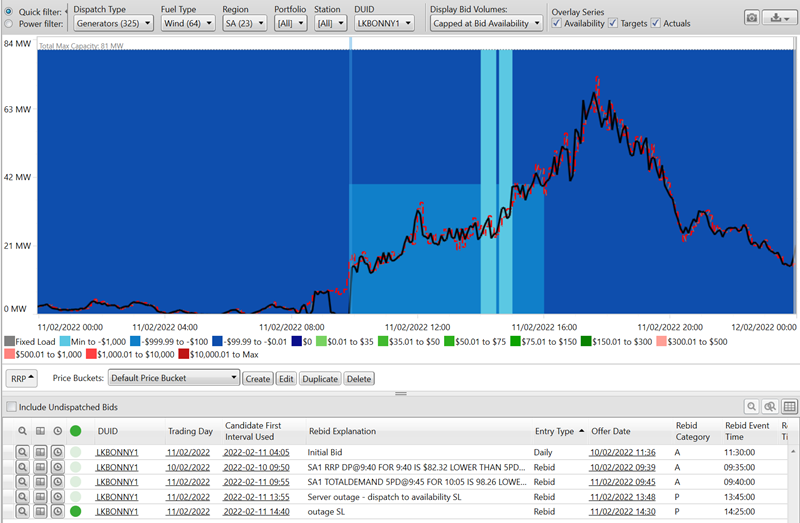 Lake Bonney 1 actively rebid to move some of its capacity into lower price bands across the day. On other days recently Lake Bonney 1 rebid for constraint management. 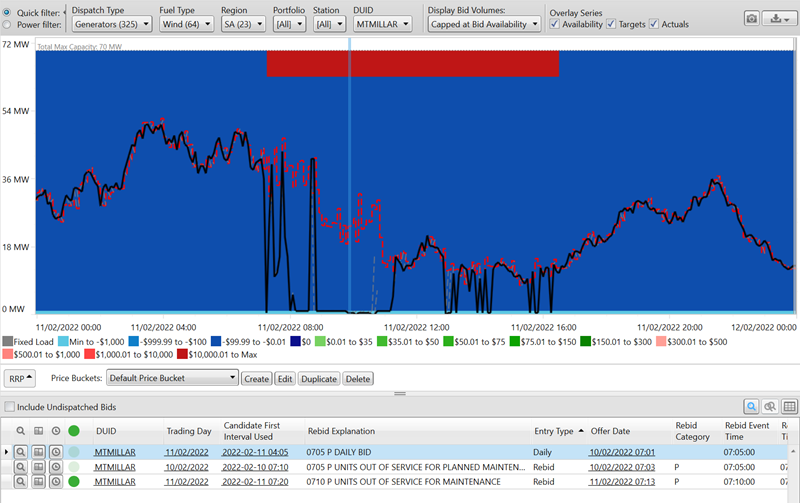 Mt Millar actively bid its capacity not in service to the market price cap (the red block at the top of the chart) and noted this in the rebid reason. This is a little puzzling as such a bid would usually have no effect as the availability (the red line) would already be limited based on SCADA measurements including the turbine availability. Perhaps Mt Millar doesn’t have this SCADA point set up. Most of its capacity is bid at –$38.55, so it was dispatched to zero through the morning. 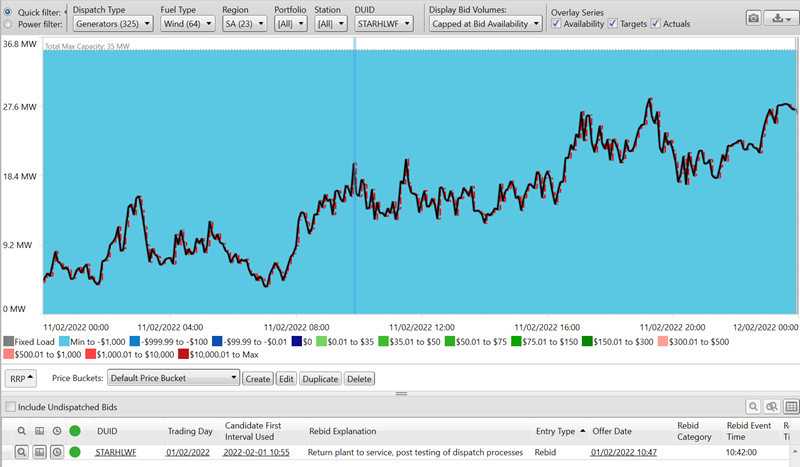 Starfish Hill has a set and forget bid at the floor price. 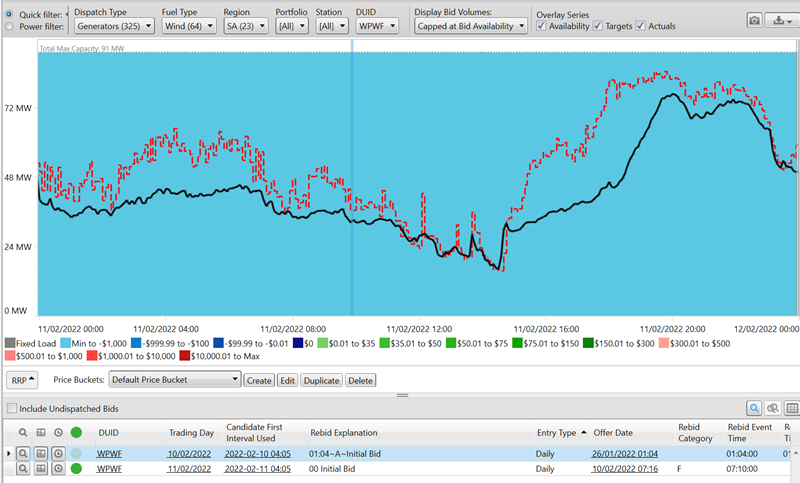 Wattle Point is a interesting, as its bid is at the floor price, but it isn’t being dispatched up to its availability (the red line) because it has a ramp-rate set to zero. This means each dispatch target will be very close to the previous, and if the target is below the availability there’ll be a semi-dispatch cap, effectively holding the plant at its current output level. This would be great for causer-pays FCAS costs (as there’s very little deviation from the target), but it looks like a lot of wind is being spilled. The ramp rate was 10 MW/min for a few hours on 7 February during test of the control system (noted in the rebid reason) but has been 0 MW/min since then.

Another day where LOR2 notice issued for SA – what does it mean?

AEMO issued a Market Notice this morning for an LOR2 “Low Reserve Condition” in South Australia. Here’s my sense of some of what’s happening.

Be the first to comment on "How are South Australia’s non-scheduled wind farms participating in the market now?"