Yesterday there were temporarily warnings of possible LOR2 Low Reserve Condition for the southern regions this morning – so it’s not really a surprise to be greeted with a run of SMS alerts this morning with volatility across all regions: 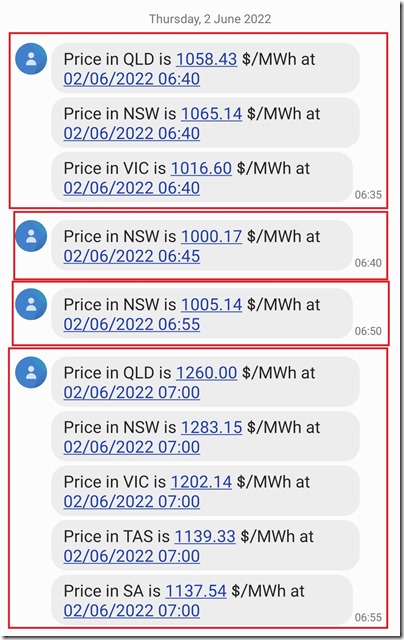 The latest dispatch interval shown in the run above (the 07:00 dispatch interval, with price set around 06:55:20) shows prices up across all 5 regions.  Here’s a snapshot from the installed NEMwatch v10 application showing  the broader situation: 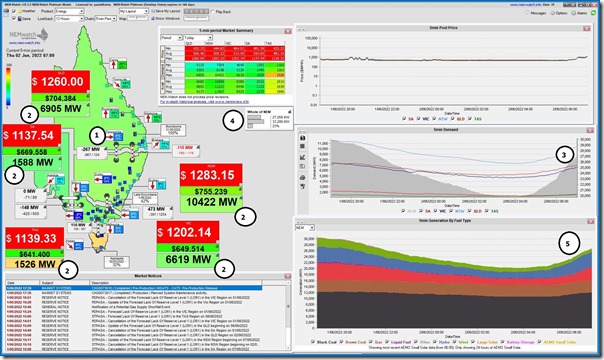 With reference to the numbered notes on the image:

1)  With the near real time temperature readings from the BOM we can see the cool and cold weather spread as far north as southern/inland Queensland.

3)  This is ramping up rapidly this morning for each region, and across the NEM.

(b)  More broadly, readers should understand that its these increasingly steep ramp rate requirements that are a growing challenge of the energy transition – see from the ~26:36 minute mark in this presentation about GenInsights21 for the Smart Energy Council.

5)  In the fuel mix this morning, we see (as forecast in prior warnings for this day) that the wind output has dropped again … that’s another factor added on top of the often discussed (including front page of the AFR today) coal unit woes.

Given the concerns about today, in particular, it’s probably worthwhile walking through this overview of which coal units are running and which are not – we’ll do this with the ‘Generator Outages’ widget in ez2view this morning, and separate them out by region:

Here’s the view of the 22 coal units still operational in the QLD region: 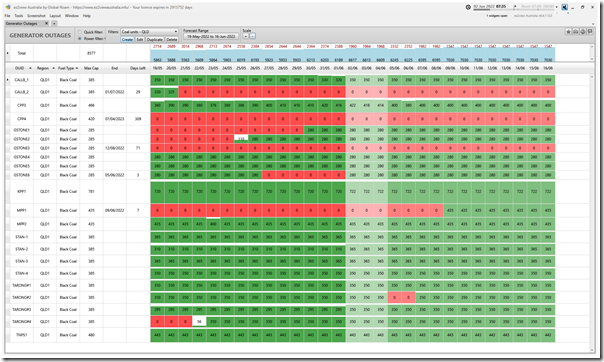 Aggregate coal unit MaxCap is 8577MW – of which yesterday there was 2388MW unavailable at some point in the day (either fully or partially).  That’s roughly a 27% unavailability ratio.

Of these units, we see the following:

1)   Four units at Stanwell are operational

2)  Two of four units at Callide are offline:

(a)  Callide B2 is offline and is not forecast to be back until 1st July.

3)  There are two units of six units at Gladstone offline:

(b)  We see from the tabular view that the outage at Unit 6 was not scheduled as at Saturday 28th May, so we can presume this is a forced outage.

4)  The Tarong fleet of 5 units are fully operational

… but the tabular view highlights current plans for an outage of unit 2 that would begin on-or-before Sunday 5th June (the MT PASA DUID data AEMO last published for today, Friday and Saturday is stale).

Here’s the view of the 15 coal units still operational in the NSW region: 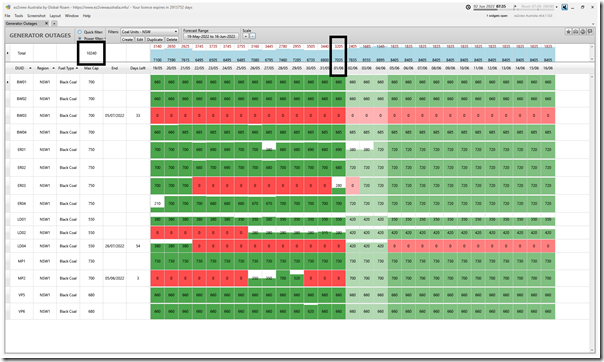 Aggregate coal unit MaxCap is 10,240MW – of which yesterday there was 3,205MW unavailable at some point in the day (either fully or partially).  That’s roughly a 32% unavailability ratio.

Will fill in the unit details later, if time permits

Here’s the view of the 10 coal units still operational in the VIC region: 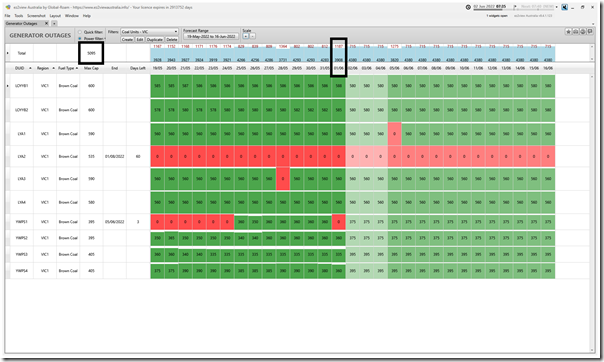 Aggregate coal unit MaxCap is 5,095MW– of which yesterday there was 1,187MW unavailable at some point in the day (either fully or partially).  That’s roughly a 23% unavailability ratio.

Will fill in the unit details later, if time permits