The day after un-suspension of the market seems an appropriate time to take a quick look at how volumes offered into the market, and at what price, have changed… but readers should remain cognisant that this focus period (of about 2 weeks) is only a very small subset of the broader challenges of the ‘2022 Energy Crisis’ as noted in this article from earlier today.

(These two linked articles have taken about 12 hours to finish, in total, interspersed with other weekend activity)

(A)  Recapping the timeline

Because we’ll be referring back to it frequently, I thought it would be useful to provide the following brief chronological record of significant events:

Let’s break the supply-side bids into two discrete bundles of plant to see what each picture can show us:

(B1)  Looking at Wind and Large Solar plant

Let’s start by looking at the Semi-Scheduled plant (i.e. Wind and Solar plant) – in the following trended bid stack just for these plant in ‘Bids & Offers’ widget inside of ez2view we see a number of interesting changes over this period: 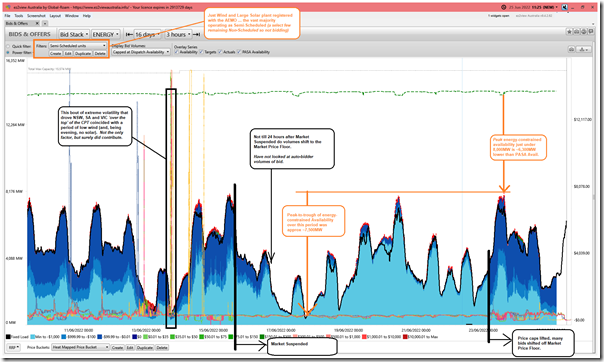 As we try to do with every article, click on the image for a larger view.

As noted on this chart:

1)  Coinciding with (and contributing to) the NSW, SA and VIC regions exceeding the CPT on Monday evening 13th June … a periodic lull in wind output NEM-wide overlapped with sunset and daily peak grid demand to provide two more factors that drove volatility ‘through the roof’ (literally) such that  Administered Pricing began.

2)  Through the period of the Market Suspension, we highlight that:

3)  Of the energy-constrained capacity that was available:

… I’ve not had time to look into this, but wonder if this was the result of some delay in auto-bidders?

… I’ve also (still) not had time to look further into this rebidding at Coopers Gap WF that went the other way on 12th June 2022 with the QLD region at APC.

(b)  In contrast, there was an immediate shifting of bid volumes away from the Market Price Floor on Thursday morning 23rd June when the price capping was removed (something the AEMO had telegraphed in advance).

(B2)  Looking at Everything Else (i.e. dispatchable plant)

Subtracting the Wind and Large Solar plant off the aggregate supply-side offers over the same period, we’re left with a chart mostly for Scheduled plant (but also some Non-Scheduled as well, though noting they don’t bid) that looks as follows: 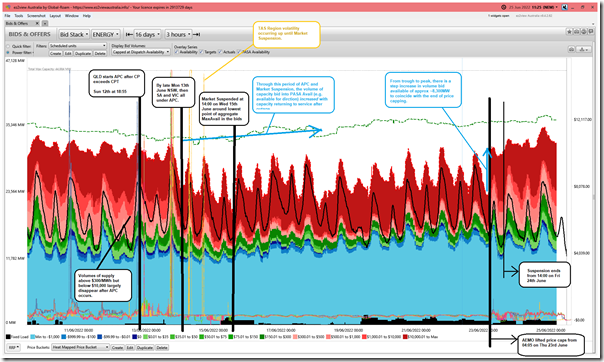 In simple terms, this represents the volume (and prices) offered by the ‘Keeping the Lights on Services’ … which in this case was challenged to live up to the label we’ve given it through GRC2018 and GenInsights21 (hence the AEMO stepped in and Suspended the Market).

The image contains a number of different annotations, and I’ll note below the main ones:

… there are two significant theories of why this might have happened, as noted below.

(b)  Important to note, as well, that the volume offered to the market climbs during time of morning/evening peak in demand (i.e. when the black line – aggregate dispatch – spikes for morning and evenings):

(i)  This leaves the underlying trend of volume offered much more cyclical.

(ii)  However we need to remember that the bid availability shown is ‘ex-post’ (i.e. after the fact) so presumably would show the volume added back into the market as a result of directions – I’ve not invested time to check, but presume that at least some (and perhaps all) of those spikes in availability for morning/evening peaks would be the result of capacity offered to the market as a result of Directions from the AEMO.

2)  From around the point of Market Suspension or a day beforehand we start to see the trend of volume bid into ‘PASA Avail’ increasing as a number of units returned to service (like these three noted on Thursday 16th with respect to the prior 24 hours).

3)  At the point where the price caps were removed on Thursday 23rd June, we see a vertical jump of capacity bid available in the pricing market of ~8,300MW in aggregate across all of these plant included in the filter above.

… seems clear that this was the volume of capacity that had decided (for Possible Reason #1 or Possible Reason #2 … or for some other reason?) that it could not bid into the pricing/dispatch market during APC or during Suspension).

(C)  Why withdraw capacity (even if not completely*)?

This is an obvious question that arises from the above … and it’s quite an important one, as well.

1)  with respect to the ‘not completely*’ caveat, note in the second chart above that the aggregate level of ‘PASA Availability’ actually trends upwards – hence there is a widening gap between capacity available to AEMO if required and that bid into the normal NEMDE dispatch process

2)  it’s this widening gap between the two measures of Availability that has people asking questions.

Lots of people have been asking that question (with a subset using emotive language to describe Possible Reason #1 as ‘gaming’ or ‘gouging’ and so on.) … but most people seem unaware of Possible Reason #2 noted here.

Let’s be clear … what happened in the immediate aftermath of the Administered Price Caps being reached on this occasion appears to be most significantly due to deficiencies in the ‘Keeping the Lights on Services’ shown in the second chart above.

It appears to be moreso a result of ENERGY constraints, not CAPACITY constraints with respect to these plant.

However comparing the scale of the numbers in the two different trends should reinforce questions being asked about ‘The Rise of Just-in-Time’ within GenInsights21:

1)  With respect to this energy transition; and

2)  Especially when comparing the scale of the numbers for ‘capacity unavailable’ to ‘Total Maximum Capacity’ for each.

As noted earlier today, we should be seeking to learn as much as possible from this exercise with an open mind to what it might tell us about the (pretty hazy?) course currently charted through the energy transition seas ahead…

There was a temperature-driven spike in demand across the NEM later in the week beginning Sunday 7th January – culminating in the summer’s first demand peak above 30,000MW (on Thursday 11th January).

On this occasion, the spot price spiked above $1000/MWh in Queensland, NSW, Snowy and Victoria,

A short note about the AEMO preliminary report, published 4th March 2022 – into the SA market suspension on 18th February 2022.