A little earlier today I tabulated these 7 instances where either (or both) happened:

2)  A yo-yo in Available Generation for the QLD region.

Leaving aside Instance #1 for now, because it happened prior to Administered Pricing, I’ll start by looking at Instance 2 to see if I can find some of the factors in this yo-yo

Let’s start with this overview: 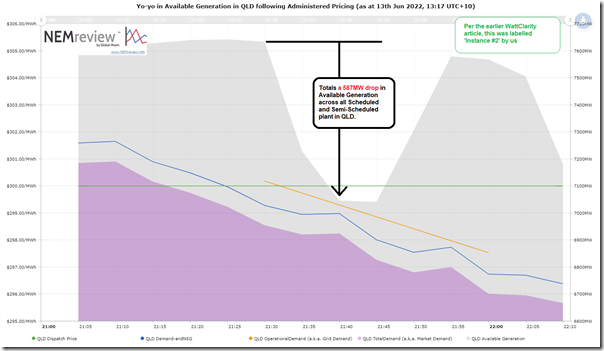 Clients with their own licence to NEMreview v7  can open their own copy of this trend query here.

With reference to the ‘Bids & Offers’ widget in ez2view I’ve time-travelled back to around that time and had a bit of a look and would like to highlight two particular images from around that time: 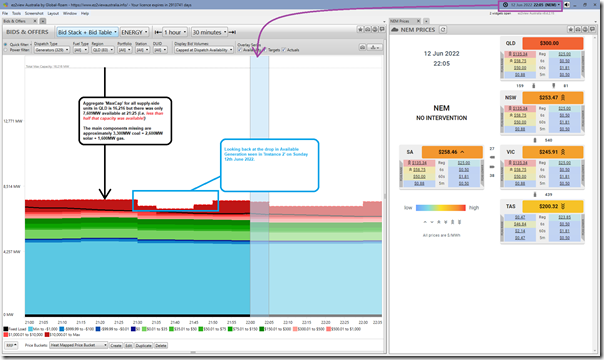 I’ve started here to put the 587MW drop in Available Generation into context.

As noted in the image:

2)  That’s more than half of the installed capacity in the QLD region!

3)  Of this capacity, the big chunks unavailable at this time include:

(a)  3,300MW of coal unavailable … as Allan explored here over time and with this ez2view snapshot communicating what was out;

With that context in mind, let’s have a closer look at three assets in particular:

In this snapshot here we see the Braemar 7 unit (i.e the only unit in Braemar B station that was running earlier) come offline with ‘Pipeline pressure lower than expected’ as the rebid reason: 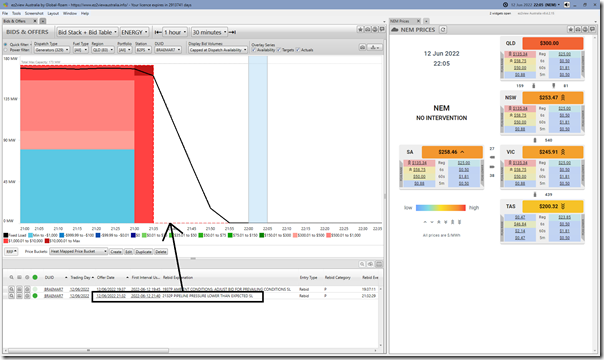 That represented 171MW of the 587MW aggregate drop in Available Generation.

(B2)  The Wivenhoe units

And here’s an aggregate view of bids in that same window from all of the QLD hydro plant: 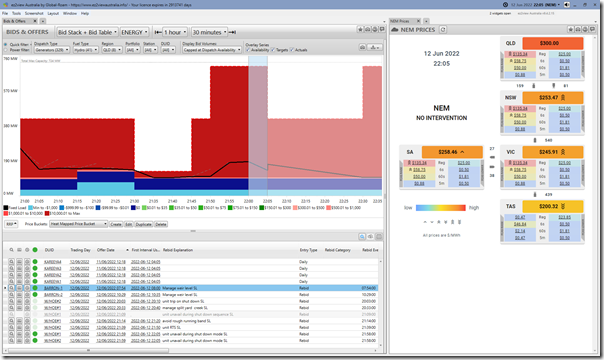 Both units at Wivenhoe were made available by 21:55 … though one does wonder how much water they actually had in storage given rebid reasons about ‘manage split year creek’ and ‘manage weir level’ seen earlier in the time window.

We need to look at MSTUART3 (below) to see the 138MW drop in Available Generation at 21:35 for reasons of ‘avoid uneconomic start’ … which was similar to what we saw on Friday evening last week as well: 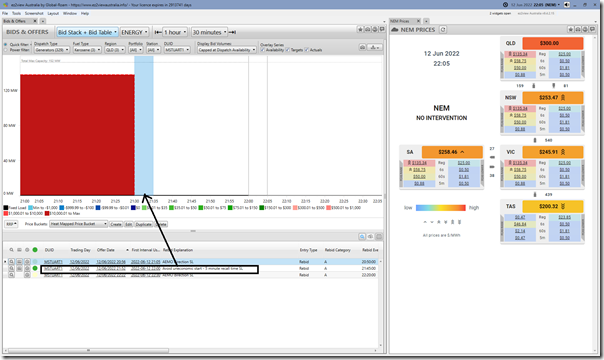 With prices capped at $300/MWh for at least a week … and probably much, much longer … I can’t see how any plant with a SRMC above that level can run economically (and that includes Wandoan and Wivenhoe in terms of ‘buy low and sell high’ as well)!

Clearly there is going to be a massive call on the compensation processes AEMC speaks about here.

With all regions of the NEM having been suspended by AEMO on Wednesday 15th June 2022, guest author Allan O’Neil takes an initial look at what’s visible in terms of operations in the NEM.

Catching up on recent developments, this AEMC Rule Determination (enabling AEMO to deal with ‘indistinct events’) caught my eye.