We’ve seen on Sunday evening and Monday morning in South Australia how network outages are a significant driver of spot price volatility.  This morning it was Queensland’s turn, with a run of volatility partially captured in this run of SMS alerts focused on the ENERGY market: 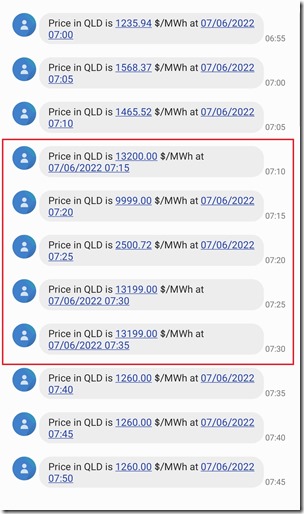 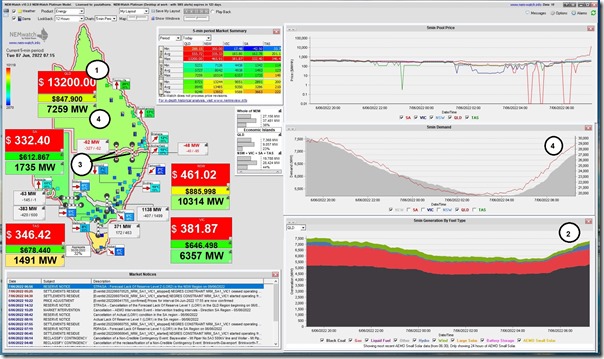 … however before commenting about the four points noted, it’s useful to also have a quick look at this snapshot from ez2view time-travelled back to the same point (i.e. 07:15) this morning: 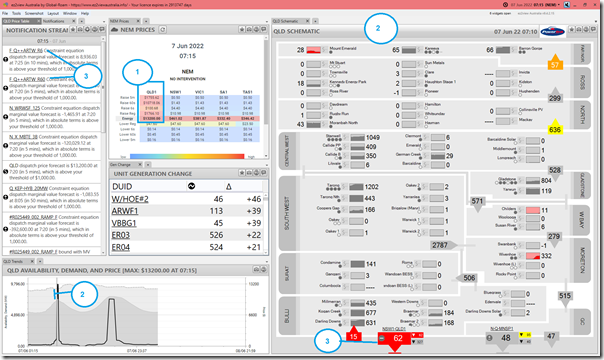 Using the same numbering on the two images, note the following points:

(a)  However that’s not the whole story, as we see in the ‘NEM Prices’ web widget inside of ez2view all 4 x Raise FCAS prices were elevated, particularly so for Raise 60 second (and these were separated from the southern regions).

2)  Looking across the ‘QLD Schematic’ widget in ez2view, we can see what was missing:

(a)  Some units we already know are on long-term outages following major failure (i.e. Callide C4 and Swanbank E)

(b)  Apart from those units, we see some other thermal units notably out:

i.  The outages at Millmerran 1 and Callide B2 and Gladstone units 3 and 6 noted here five days ago continue.

ii.  Other coal units are operational, but not running flat out … though see note (4) below about some of them probably providing Raise FCAS services.

iii.  Some gas-fired and liquid-fired units are running, but a number are still not at this point, which is noteworthy given prices had been >$1,000/MWh for fifteen minutes before this major spike (I’ve no time now to explore why)

(d)  At 07:15 the contribution from each of the Large Solar farms across the state are all single digits, except for Childers Solar Farm (at 11MW)

(e)  The three wind farms (Mt Emerald, Kennedy and Coopers Gap) are shown to be contributing at under half capacity.

(f)  Wandoan battery (which had been seen operating at some times since I wondered about the slow progress in April) is also not operating.

… as a result of which there’s approximately 1,700MW of Available Generation that’s not producing to meet Market Demand of 7,259MW at this point.

(a)  That’s because of three bound FCAS constraints (two of which are highlighted in the ez2view snapshot above):

i.  The ‘F_Q++ARTW_R6’ constraint equation … which relates to Raise 6 second FCAS;

iv.  Later in this run of volatility we see other constraint equations (like ‘N^^Q_ARTW_B1’) also play a role

(b)  Each of these is severely impacting on the ‘Export Limit’ on QNI (i.e. which sets the maximum flow north) … and in fact meaning it must flow south* at this point.

PS (re *) … with respect to my ‘must flow south’ comment above, worth reading Allan’s comment on LinkedIn here in clarification.

(c)  These three constraint equations, and many others, are all members of the ‘N-ARTW_85’ constraint set, which:

i.  Has been invoked because of an outage on the Armidale to Tamworth (85) line

4)  I’ve highlighted the QLD Market Demand of 7,259MW at this point, and we can see it’s ramping up for the morning peak … however it’s important for readers to understand that this is not the only draw on available capacity in QLD.  As we see in the above, available capacity in QLD is also being required to supply raise FCAS services, which is also (through the NEMDE co-optimisation process) driving prices higher still for all 5 commodities.

… so the big take-away might be it could be a (price-wise) bumpy ride in the QLD region for the next four days.

A follow-on from Administered Pricing in QLD is the start of some head-scratching market outcomes … such as this spike in South Australia.