Some people have asked me about what seems to be the slow arrival of the Wandoan Battery in Queensland … and I did not know the answer so I thought I would pose the question here, and see if any of our readers can help (either in comments below or directly).

Here’s a trend of daily peak activity on the battery in the >9 months since the battery was first registered by AEMO: 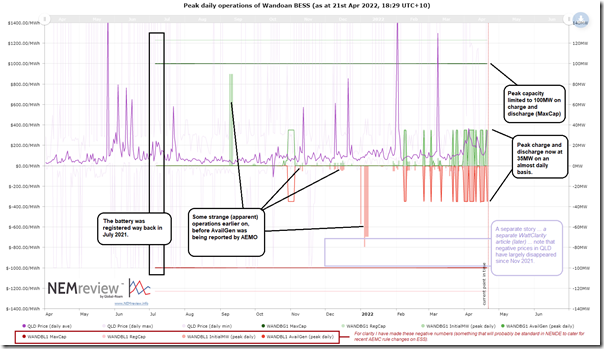 For those with access to the NEMreview v7 software they can open their own copy of this query here.

The questions I’ve received revolved around why it was (apparently!) taking so long for the battery to proceed from registration to full commercial operations?

As can be seen from the chart:

1)  The battery is limited on charge and discharge to 100MW in either direction.

3)  Before that time there were some aberrations:

(a)  where charge or discharge seems to show, but not without the commensurate availability in NEMDE

i.  There’s a particularly pronounced spike in (apparent!) discharge on 9th, 10th and 11th September 2021

(b)  this could be a combination of:

i.    Perhaps the smaller ones might actually be charging and discharging

ii.  But the larger ones (noted above) might be some data error.

… but that’s all speculation on my part!

This was prior to the registration of Wandoan BESS.

The Wandoan BESS was registered 7 months earlier, but was barely operating.

Note that Wandoan was barely running on 8th March … eight months after being first registered!

So it’s naturally of interest for people to understand why the battery is not yet fully operational?

I wonder if any of our readers who are more closely involved can fill us in?

Also worth highlighting (as on the image) that negative prices in QLD have largely disappeared since November 2021 – I’d seen others have noted this already on social media, and will follow up at some point in future when time permits…

Some activity alerts prompt this short look at how the Victoria Big Battery is recovering from the industrial fire that took it out of action for a number of weeks.