This is not really new news … but it is for me, so I thought it might also be useful to highlight for others as well (and for future reference in other articles).

Today, amongst other things, I have been taking a pre-release copy of ez2view v9.4 for a spin, checking out the current status of a number of new widgets we have added in to meet various requirements.  It won’t be too long, now, before our growing number of clients will have access – and we’ll be very keen on client feedback!

One of the new widgets is a ‘Generator Outage’ widget that’s been designed to make generator outage plans more visible to ez2view users.  Keep in mind that:

1)  This new widget has been made possible as a result of the ERM Rule Change that made outage plans for fully Scheduled units visible out three years into the future.  This new widget follows on from the ‘MT PASA DUID Availability’ widget we released over a year ago as part of ez2view v8, and which has featured in a number of articles on WattClarity.

2)  As I have noted before, for reasons that escape me the AEMC did not see fit to also make sure that outage plans (i.e. either full or partial) for Semi-Scheduled units were also rolled up in the same rule change.

(a)  Seems not to be in interests of transparency of this energy transition.

(b)  Naturally, then, Semi-Scheduled units are not visible in this new widget, either.

3)  As Non-Scheduled units don’t bid at all, these are essentially invisible in terms of outage plans.

With these caveats in mind, here’s a snapshot of the way the widget looks: 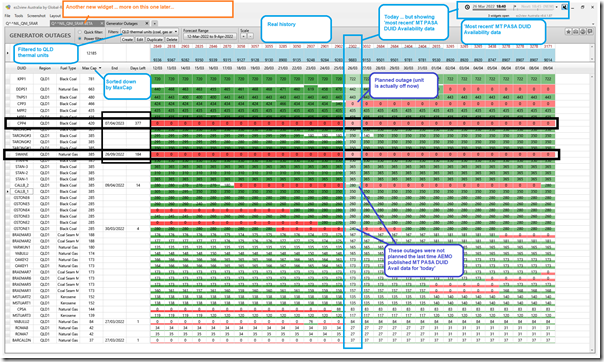 Remember to click on the image to open in a larger view!

Frequent readers will recall we’ve taken a keen interest in the unit following the Callide C4 Catastrophe on 25th May 2021 – and note that the unit’s current scheduled to return to service on 7th April 2023 (i.e. 377 days away still!).

Hence, the return to service expectation is still the same as it was on 30th December 2021 when I wrote this short note using the ‘MT PASA DUID Availability’ widget.

Readers will also recall that the Swanbank E outage was one of the factors contributing to the extreme volatility in Queensland’s ‘Heatwave Week’ of February 2021.  I’d seen the unit out at that time, and had seen the unit still out since that time, but not invested the time to dig to understand more.

(B1)  Information from CleanCo

Seeing the above sparked some more interest in understanding why the unit’s slated to be out for so long, so I looked on the CleanCo website and found this page here, which currently contains the following note:

CleanCo has started investigating the cause of an event that damaged the Automatic Voltage Regulator (AVR) at its Swanbank E Power Station on 20 December 2021.

An AVR is an electronic device that regulates voltage. It maintains the generator output voltage to ensure stable delivery of power to the electricity network.

CleanCo has advised the Australian Electricity Market Operator (AEMO) that its best estimate is that the power station will return to service on 26 September 2022.

The return to service date is based on the information available at this time and may change.’ 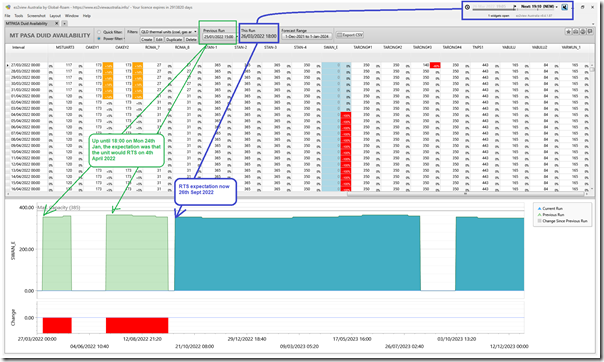 2)  Informed the AEMO, via update to the MT PASA Availability data in its bid (which then flowed through the market in the update for 18:00 that day).

Hence that change, which CleanCo informed AEMO and the market of on 24th January 2022, must really have been a disappointing one.

Another new widget we’ve developed to the point where we are keen on feedback from customers is the ‘Bids Explorer’ widget … which uses the upgraded bids data set we massively upgraded for ez2view v9.1 in Q4 2021, but is designed to fulfil a slightly different function, in showing change in the full bid stack offers across a Trading Day.

Referring back to this on 20th December 2021, we see that the unit tripped just prior to 11:00 NEM time on the day, with a rebid offered at 10:58 in response (note that the initial expectation was a fast return to service): 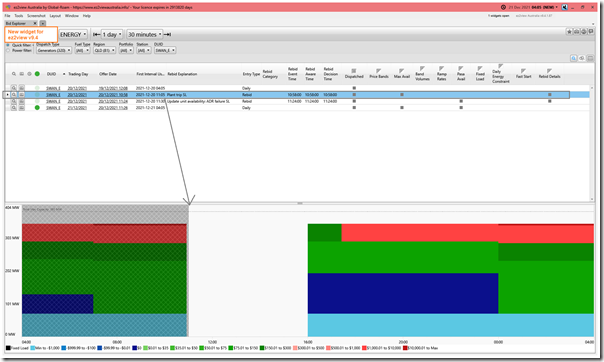 There was a subsequent rebid ~30 minutes later to mark the AVR failure, and note that the unit would not be available for at least the rest of the Trading Day: 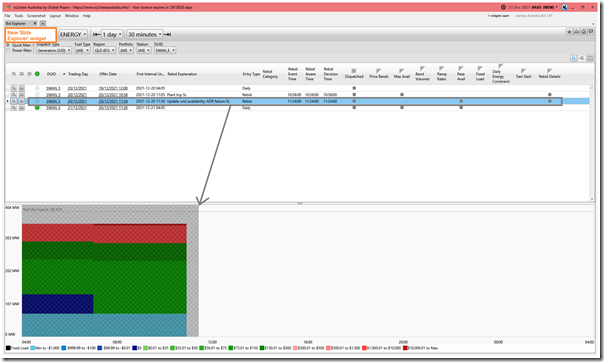 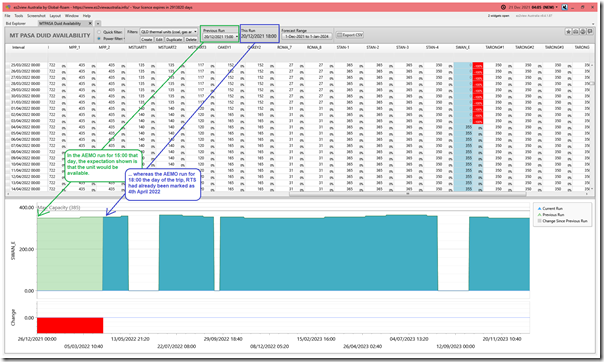 As is the case for Callide C4, this is another long outage we’ll need to keep a closer look at … especially given the CleanCo note on their website with respect to Swanbank E (published in January, but still there today) that ‘It is not yet known how long it will take to replace the AVR.’

Callide C4 return to service now not till December 2022

There’s been a 6-month delay in return to service expectation for the damaged Callide C4 unit.

No sign (yet?) of Callide C3 returning to service

With the prior expectation being we’d see Callide C3 return today (Friday 23rd July), we can’t see any output at this point.

A short article marking return to service for the Callide C3 unit, which has been offline since 25th May 2021.