In a scenario that has many similarities to what happened Sunday evening following the problems at Pelican Point, the price also spiked this morning in South Australia at 06:45 (NEM time).

Here’s a snapshot from ez2view time-travelled back to the 06:45 to highlight a couple things: 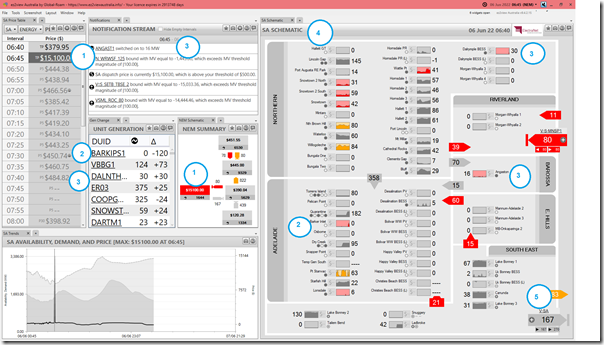 With reference to the numbered annotations on the image:

… not shown here, but a quick view of the ‘Forecast Convergence’ widget shows that the spike was not expected in AEMO’s P5 Predispatch forecasts

(a)  note that this happened within the same dispatch interval as the price spike, so this suggests that the NEMDE process did have some knowledge of the drop in output in Barkers Point

(b)  also not shown here, the ‘Forecast Convergence’ widget shows that the

(c)  in other words, the drop in output might have been seen in the dispatch targets for the station

4)  Looking across the ‘SA Schematic’ widget we see wind output not as consistently strong as last night:

(a) but still quite strong; and

5)  Which reinforces, again, why Heywood was constrained to flow east despite the high price in South Australia:

(a)  Yesterday evening it was the ‘V^^S_SETB_TBSE_2’ constraint equation that was bound, limiting transfers such that they must flow east with the high winds in SESA;

(b)  This morning it was a slightly different ‘V::S_SETB_TBSE_2’ constraint equation that was bound;

(c)  Both are members of the ‘S-TBSE’ constraint set … along with many others.

(d)  The net effect looks very similar, as we see in this snapshot from the new and under-development ‘Constraint Dashboard’ widget for this morning: 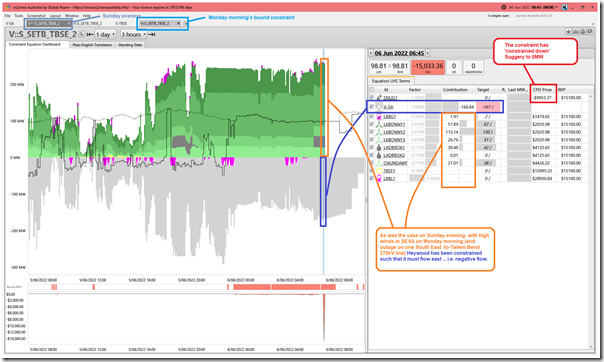 6)  As was the case yesterday, the AEMO (through Market Notice 96835 at 08:16) temporarily warned of an actual LOR1-level Lack of Reserve condition occurring in South Australia:

1)  Whilst there will be some readers who will point the finger at these two thermal plant for being ‘to blame’ for these price spikes, it’s worth being more broadly aware that the market environment is increasingly the case whereby

(c)  … which potentially means the consequence of any potential unit outage increases (remembering how Probability and Consequence are both independent, but combine to determine Risk).

This morning over on Twitter, I was pulled into a discussion that had started with respect to volume of wind energy curtailed in South Australia:   The genesis of this twitter conversation was the AEMO’s “Quarterly Energy Dynamics – Q1…

A quick look at this evening’s volatility.