This article was published by ITK Services, and has also been featured on RenewEconomy.

Very few commentators have focused on physical tightness of Australia’s coal supply as perhaps the single biggest catalyst of today’s soaring power and gas prices, aside from global geo-political events and their impact on international prices.

The simple fact is that the rain has dramatically disrupted coal production right down the east coast, flooding some mines and key rail routes. I don’t have data for Queensland, but this figure shows what’s happened to coal sales in New South Wales over the past couple of years. 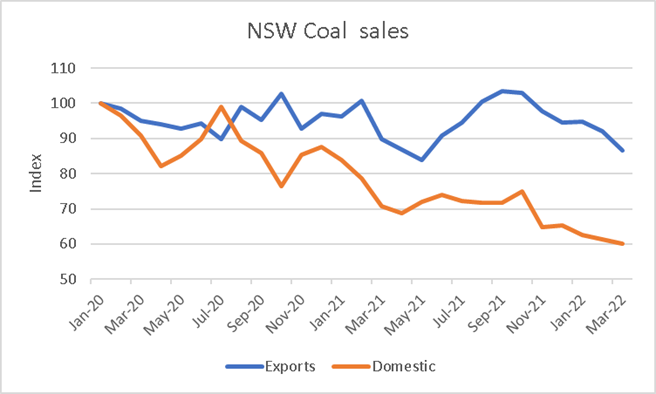 To make this figure, I assumed total NSW sales = saleable coal volume + change in inventories, and that domestic sales were total sales – exports. Then I took a three-month moving average and expressed both series as an index.

Annualised exports have fallen from 173Mt to 150Mt, and the derived annualised domestic sales from 31Mt per year to a March 2022 three-month moving annualised total of 19Mt.

So total sales are down from 200Mt to about 170Mt. International sales have fallen, but obviously producers have prioritised international markets, because of the prices, and so domestic coal generators have been squeezed.

It’s also true that outages at coal plants and the closure of one unit at Liddell arguably contributed to this, along with the mine issues at Mandalong that have handicapped Eraring, but clearly the main effect across the industry, is wet weather.

Looking forward, this could be a good news story, because notwithstanding the forecast of ongoing La Niña, consumers and electricity retailers can still hope that coal production will recover over the next six months.

As the available coal supply fell, coal generation fell and this pushed up the demand for gas generation by about an annualised 60-70 petajoules or a 15% increase in Australian gas demand (excluding Western Australia).

This gas had to be bought at export market prices, but more to the point there is an actual physical limit on shipping gas from Queensland to Victoria and South Australia and NSW, because the pipeline from Moomba to NSW and South Australia is physically limited.

There is some gas storage at Iona, but that is being used up every day at practically its maximum discharge rate. Things will improve as coal production picks up and we move into Spring.

Gas generation demand is well up

I publish this table quite often to see how the fuel mix is changing. Be aware that even though the numbers are annualised they only represent 30 days of production and are not seasonally adjusted and so they shift around depending on time of year. 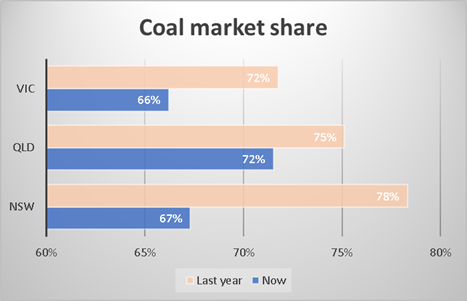 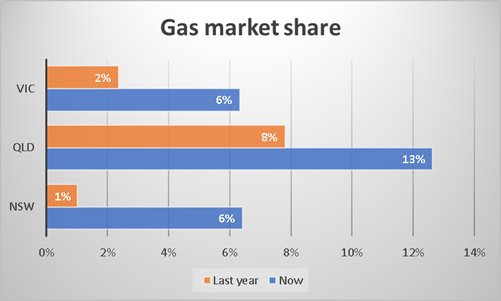 Total gas demand is up an annualised 8TWh over the past 30 days. Again that’s an annualised number. Let’s work on average gas heat rate across a mix of open and combined cycle of say 8.5 GJ/MWh, then the annualised increase in gas demand from power generation is about 68 PJ or a 15% increase in total demand relative to historic annual consumption across all Australian gas sector consumption of about 450 PJ.

Origin’s coal problems come from under supply from the Mandalong mine, which is owned by Centennial Coal, itself a subsidiary of Banpu coal. Centennial is, incredibly, unprofitable in Australia.

And that is not withstanding that its cost of production, although high, is far below the spot price of coal and rather reflects that coal is sold in Australia mostly on contract. Interestingly 22% of expected output in Australia was uncontracted as of May.

However, the point to be made is that coal production from Mandalong and from Centennial, which was down 43% year-on-year, is forecast by management to pickup.

So even if we assume that Centennial can only deliver most of what it says it will do, it should still be the case that Eraring coal supply gets back to contracted levels within six months. Still, the desire for Centennial to sell the coal at spot will remain.

More broadly, and although the problems at Mandalong are likely related to the age of the mine (17 years of operation is likely to make a decent dent in the best quality reserves), it’s also very likely that the entirety of the Hunter and operations in Queensland have been impacted by wet weather. And so production is unlikely to have been able to respond to the price signal.

My point, though, is that although the rain has not gone away, it’s still reasonable to expect production to recover over the next six months, both in NSW and in Queensland. 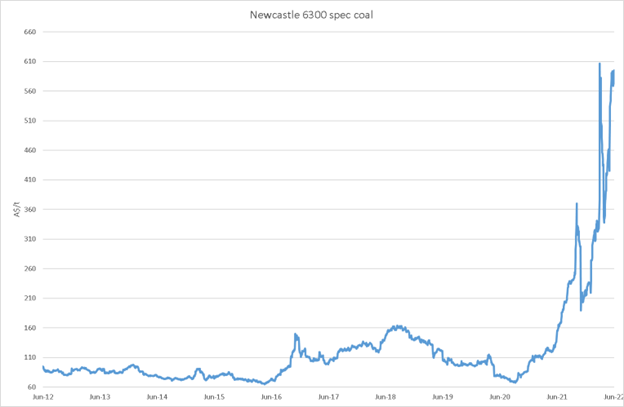