Fifth update today, covering things I missed at the time due to Brisbane flooding and other priorities …. 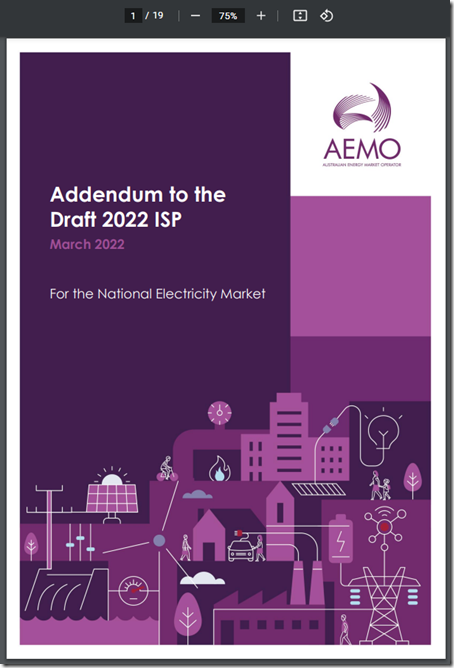 The AEMO explained in an email at the time that the addendum ‘provides additional information on four topics that were identified by the Australian Energy Regulator (AER) in its Transparency Review of the Draft 2022 ISP’…. and notes that the four topics are as follows:

‘…the revenue adequacy modelling was not a significant driver for generator closure timings.’

My sense is that it’s worth everyone reading the method which AEMO actually used in the ‘Step Change’ Scenario (which their focus group sessions voted as ‘most likely of the 4 scenarios devised’ of coming to fruition).

The AEMO notes that, in this case, ‘Approach 2’ is used, with Approach 2 being noted as:

‘Approach 2 – where an explicit emissions constraint was implemented, a pure least-cost approach was used’

… or, in other words, an assumption was made that there would be some form of emissions limit imposed.

Each reader is going to have their own view of how likely it is that we’ll have a NEM-wide carbon constraint imposed … but independent of this it’s important to recognise that the AEMO seems to be saying (unless I have misinterpreted?) that the pace of closure slated in ‘Step Change’ scenario, which has generally been popularly received:

(b)  … because loss of generator profitability is forecast to be insufficient to drive that rate of change.

Comparing and contrasting two of the big coal closure announcements in recent times, some might perceive that Origin (with Eraring potentially closing as early as 2025) and AGL (Loy Yang A slightly earlier than prior plans, but still running into the 2040’s) have two different perspectives on this…

In the Addendum, the AEMO writes:

‘The Transparency Review Report expected AEMO to further explain the circumstances (in terms of increased level of retained capacity or additional dispatchable capacity) that would lead to HumeLink and VNI West not progressing to the next development stage.

It is not feasible to provide specificity around the potential array of changed circumstances that may occur in the future which would lead to the decision rules not being met when this is subsequently assessed (for which the timing itself is uncertain). There are many things that could happen that would cause either materiality threshold to be met, with potential new information affecting the assumptions of any individual project, broader generation developments, and/or changes to the levels of electricity demand that the ISP developments are forecast to serve.’

… but then does provide some more context.

The AER’s question here was…

‘We expect AEMO to provide further explanation in an addendum to the draft ISP, of why the low gas price sensitivity has not been applied across all scenarios.’

1)  The AEMO requests that submissions should be emailed to ISP@aemo.com.au.

2)  Submissions to the addendum will be considered as AEMO works to finalise the 2022 ISP, which will be published on 30 June 2022.

Catching up on recent developments, this AEMC Rule Determination (enabling AEMO to deal with ‘indistinct events’) caught my eye.

Following the article on Tuesday 15th February about ‘blow-out in file creation latency’, in this article we update stats for the past week … but also look as far back as late 2018 to see a broader pattern.

1 Comment on "AEMO published Addendum on the draft 2022 ISP"