Hot on the heels of the suspension of the SA market on 18th February 2022, we also saw the TAS market suspended on 1st March 2022 … again due to loss of SCADA systems. 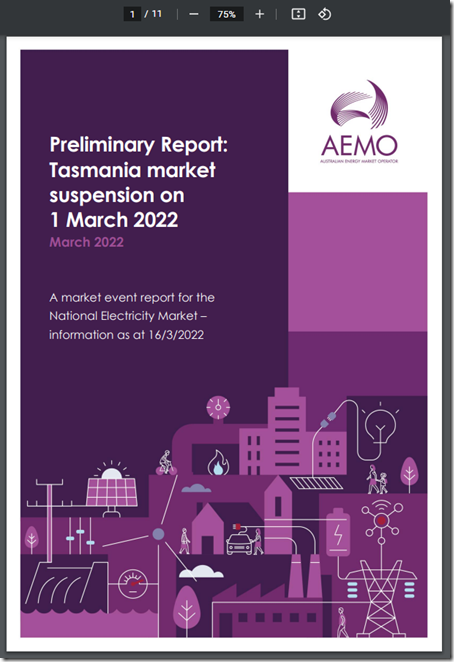 This preliminary report notes that:

‘At approximately 1200 hrs on 1 March 2022, following two separate, unrelated incidents causing damage to both Telstra fibre cables linking Tasmania to the Australian mainland, the Inter-Control Centre Communications Protocol (ICCP) link between AEMO and TasNetworks was severed. As a result, AEMO lost all Supervisory Control and Data Acquisition (SCADA) visibility in Tasmania and subsequently suspended the spot market in Tasmania from 1235 hrs to 1915 hrs.

Based on initial analysis, AEMO believes that the power system remained in a secure operating state throughout the market suspension, and that no generation or load was lost because of the incident. During the event Tasmanian prices were set using market suspension schedule pricing’

As with the incident in South Australia …

‘AEMO will undertake further analysis relating to this event and prepare a final incident report in due course. The final report will include all the market suspension reporting requirements specified in NER 3.14.3(c)-(d) and 3.14.4(f)-(g).’

It was forecast it would be a hot day in the southern part of the NEM and it did not disappoint. The hot weather was one of the factors that contributed to price spikes … in Regulation FCAS, and then in QLD and later in South Australia.

Quite a synergistic coincidence today that, at the same time as we are finalizing the release of the GSD2020, we see the AEMO publishes its Quarterly Energy Dynamics for Q4 2020.

A back-dated article about the AEMO’s 2018 ISP