It’s been a big week for Energy News in the Australian National Electricity Market, with Origin’s announcement of the early closure of Eraring Power Station yesterday morning (Thu 17th Feb) being perhaps the biggest news item (at least in terms of number of media articles I have seen written).  There’s been much written, and we have been fielding a number of calls … but alas no time to comment specifically.

If time permits in the coming weeks we will have more to share about possible implications (e.g. upsides, and downsides) of this major, but not unexpected, development.

Today I thought it would be useful to publish some real data here on performance of the Eraring units in recent times, to help with the broader conversation that is bubbling along…

(A)  About the Generator Statistical Digest 2021

Recent readers here would remember that we released GenInsights21 on 15th December 2021.

This was the update to, and major extension of, the analytical deep dive included in a wide variety of aspects of operational performance of Scheduled and Semi-Scheduled units operating in the NEM over its 23-year history, with particular focus on the most recent years.  On this page we are progressively collating some of the comments we have heard and seen others make about GenInsights21.

What we’ve not said anything about, yet (except directly, replying to the growing number of people who have enquired about a release date) is that we’ve also been working on has been the compilation of this year’s Generator Statistical Digest 2021 (GSD2021) – which we have been reviewing in draft form, and which will be released in the next couple weeks.

Our Generator Statistical Digest:
(a)  Is Collaboratively produced by Global-Roam Pty Ltd in conjunction with Greenview Strategic Consulting; and
(b)  Is an annual compilation of statistics individually for all DUIDs across the NEM (following from the GSD2020, the GSD2019 and the 300-page statistical component of the GRC2018 some years ago now).

Stay tuned for more, when this is released.

(B)  Information about Eraring Power Station, from (today’s draft of) the GSD2021

I thought it would help the overall level of the discussion to provide some real data about the way in which Eraring has been performing over the past 10 years, and how it’s performance has been changing.

Here’s some quick snips, and comments:

The ‘A’ Page of the earlier GSD2020 is described there for you to reference.  With the GSD2021 we have re-coded in  a different platform to make it easier to work with moving forwards, but the underlying structure is much the same.

Here’s the current draft of the ‘A’ page (a couple tweaks to go before release, like to include MPFR stats) for reference: 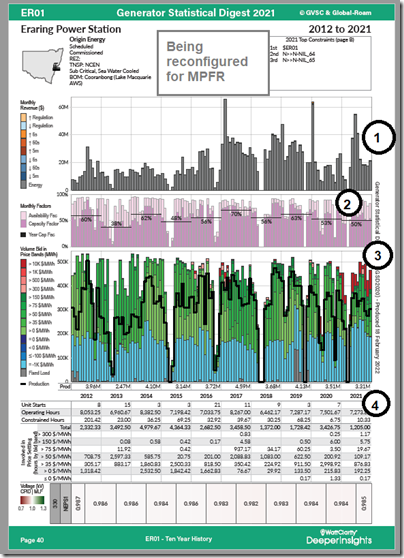 (it’s a lower quality image than the final release will be, but if you click on the image you’ll open up a larger view that should be more readable). 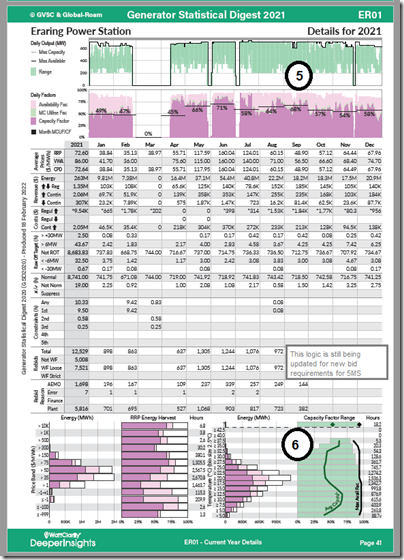 With respect to the numbered annotations, some quick comments:

1)  First point is to understand how monthly revenues trended through 2021 in comparison with other recent years.

3)  There’s definitely been a change in bid profile in 2021 as the unit has been seeking a more flexible operational profile.

4)  Most commonly when speaking about generation plant in broader discussions, people like to refer to the installed capacity (i.e. in megawatt terms, remembering a MW is a rate – i.e. ER01 is a 750MW Maximum Capacity unit)

(a)  and there is a valid role for thinking about this … e.g. such as ability to meet instantaneous peak demand;

(b)  but in terms of energy literacy it would help more significantly – but it’s more important from an energy volume point of view (i.e. in MWh terms … i.e. ER01 had approximately 50% capacity factor across the year, delivering approximately 3,310,000MWh)

5)  The daily operational cycle for the unit is shown in this chart – and one thing that stands out is the low load points (which coal generators have invested time and money to progressively lower – Eraring being on the stations often referred to as ‘flexible’).  Perhaps this closure announcement reflects the fact that increased flexibility will only get you so far?

6)  Much has been written under the ‘fails in the heat’ meme – readers might want to refer to real data shown here for the ER01 unit (and for every single DUID in the GSD2021 for calendar 2021) and refer to this article from 2 years ago about ‘Extreme temperature effects on generation supply technology’.

Keeping in mind the comments above, here’s a snip of the ‘A’ Page for ER02 unit:

In particular, you might want to keep an eye on the monthly capacity factors shown in the purple bars.

Here’s the same trend for ER03:

In all that I have read in the media articles (and even in commentary on social media) I have not seen too many people seem to assume that the retirement date is now locked in at 2025 … but is that actually the case?

“Notice has been submitted to the Australian Energy Market Operator (AEMO) indicating the potential early retirement of Eraring power station at the end of the required three and half year notice period.”

“Origin will consult with its Eraring workforce about the timing of any potential retirement, as well as providing a generous support package during any transition period. This will include re-skilling, career support and redeployment into new roles, where possible. Origin intends to engage with governments and the local community to determine the most appropriate transition planning for any eventual closure..”

So we have two distinctly different cases in recent weeks:

1)  AGL (conversely) says it will retire Bayswater and Loy Yang A ‘earlier’:

(a)  but only moves the closure dates by a relatively small amount;

(b)  which is generally dismissed in the majority of commentators I have seen both:

i.  as nowhere near enough (for emissions reduction) or

ii.  plausible enough (in terms of business case for continued operations being sustainable).

2)  On the other hand Origin says ‘potentially early retirement’ and gets lauded (perhaps on the implicit assumption most people seem to have made that the plant will shut in 2025).

Interesting times ahead in this steam rolling energy transition …

The (slow) decline of coal

Questions from several readers prompted this quick look at the long-term trend of coal generation.

As a real time reminder of the energy transition challenges, the trip of Origin’s Eraring unit 2 was a significant driver of the price spike in NSW to $15,100/MWh on Tuesday 21st February 2022.