An old adage runs that to eat an elephant, it’s best to proceed in small servings.

With a very eventful Q2 in the NEM not yet finished, the number of headline events is already large enough – unexpected price volatility in Queensland and NSW, a turbo-generator explosion and widespread blackouts in Queensland, major storm damage in Victoria, and flooding threats to the Yallourn coal mine. Not to mention moves in the regulatory and investment space with publication of ESB proposals for market redesign and the Federal Government announcing investment in a new gas-fired generator in NSW.

Digesting the details and implications of all these events is the analytical equivalent of elephant eating, so I plan to post a number of bite-size pieces on WattClarity dealing with a few aspects of what’s unfolded this quarter.

This first course focusses on overall price outcomes and trends in both the spot and forward contract markets.

In subsequent servings I hope to get into a few more details of bidding behaviour and other drivers of specific volatility events, and perhaps some overall comment on what these might indicate for future periods.

Let’s begin with an overview chart of half hourly and daily average spot prices across the quarter for the NEM’s mainland regions. This shows where and when price volatility outbreaks occurred. Note the different scales, with average daily prices on a scale one-tenth that of half hourly spot. 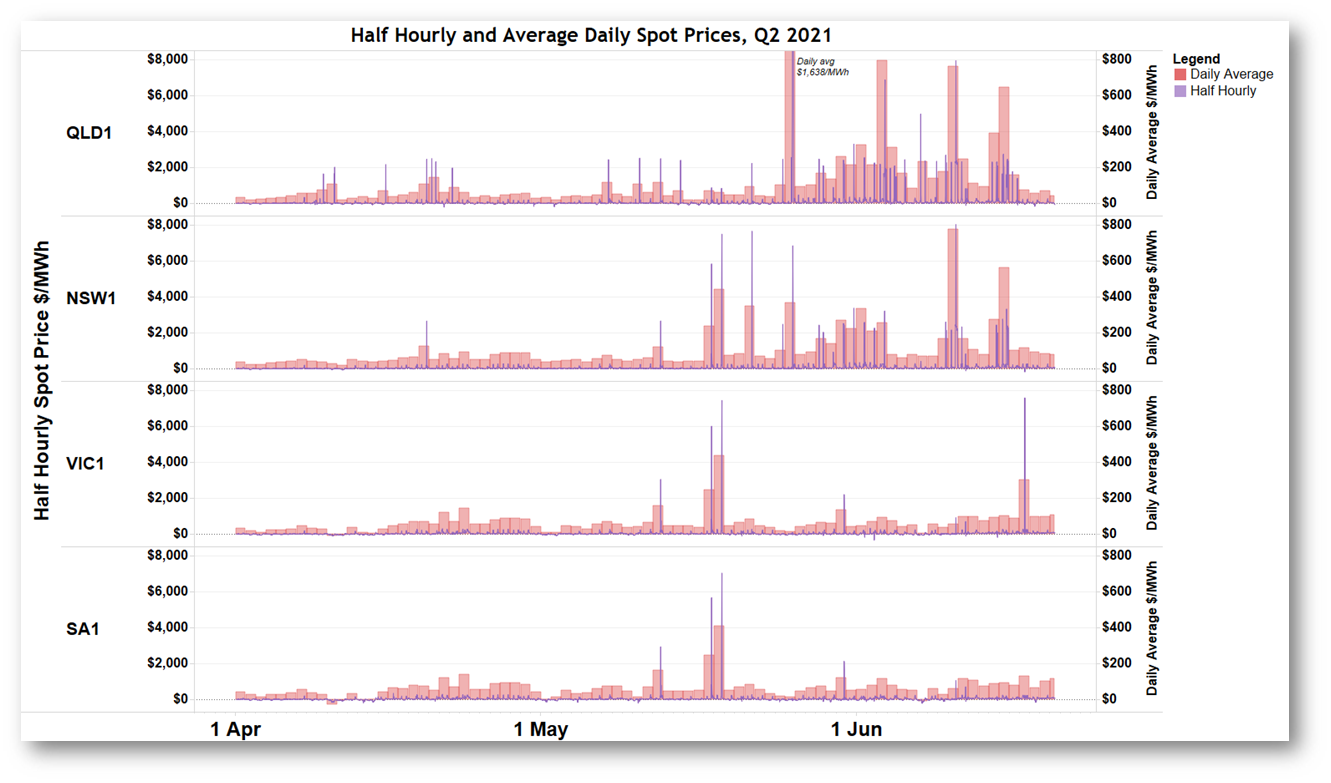 It’s also clear that the overall impact of this volatility has been greatest in the two northern states. To quantify this further let’s look at trended quarterly average spot prices: 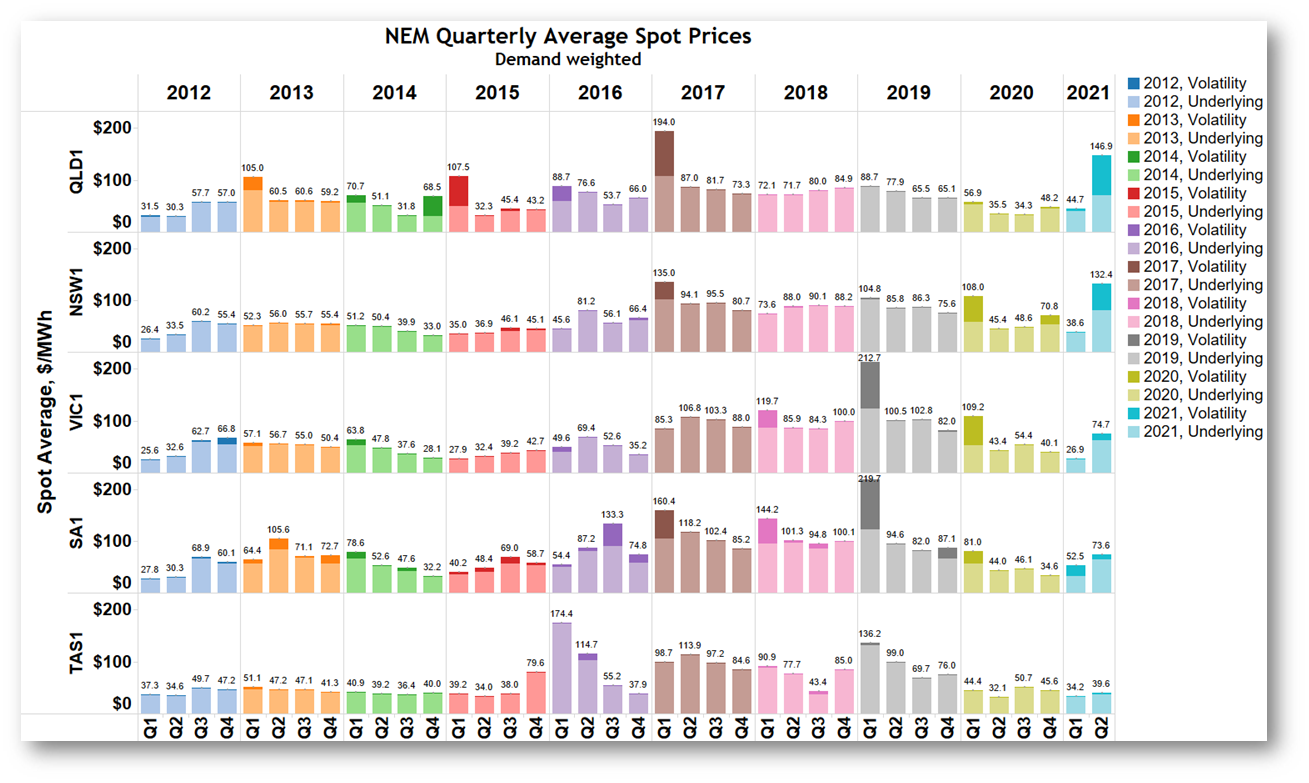 This detailed regional breakdown of quarterly demand-weighted spot prices going back to 2012 shows that in Queensland and NSW, average prices in Q2 jumped right back into territory last seen in 2017, driven by the “volatility” component identified via darker shading.  This component is the contribution to the quarterly average of half hourly prices above $300/MWh. The complementary “underlying” price component (average of half hourly prices capped at $300/MWh) also rose strongly, but did not return to the $80-$100/MWh range seen consistently through 2017 – 2019.

Averages in Victoria and South Australia show a smaller impact from volatility. Only Tasmanian averages stayed at the lower levels ruling across the NEM through most of 2020.

Here it’s worth emphasising that volatility – five digit dispatch prices – lifts both the “volatility” and “underlying” components of the average spot price. The underlying component is affected because all half hours are included in its calculation, with very high prices just capped (or replaced) by a $300/MWh limit, while their residual above $300/MWh contributes to the volatility component. If there are many prices above this cap level, their $300/MWh contribution lifts the “underlying” average as well as the “volatility” measure.

Are Prices Rising Across the Board?

By looking at patterns of spot price behaviour across hours of the day, we can get a better sense of whether underlying spot price increases reflect “across the board” secular shifts in levels or are more driven by volatility events. The following chart shows average prices by time of day for the four mainland NEM regions, highlighting how the recent lift in half hourly prices has been highly concentrated in the morning and evening peak demand periods: 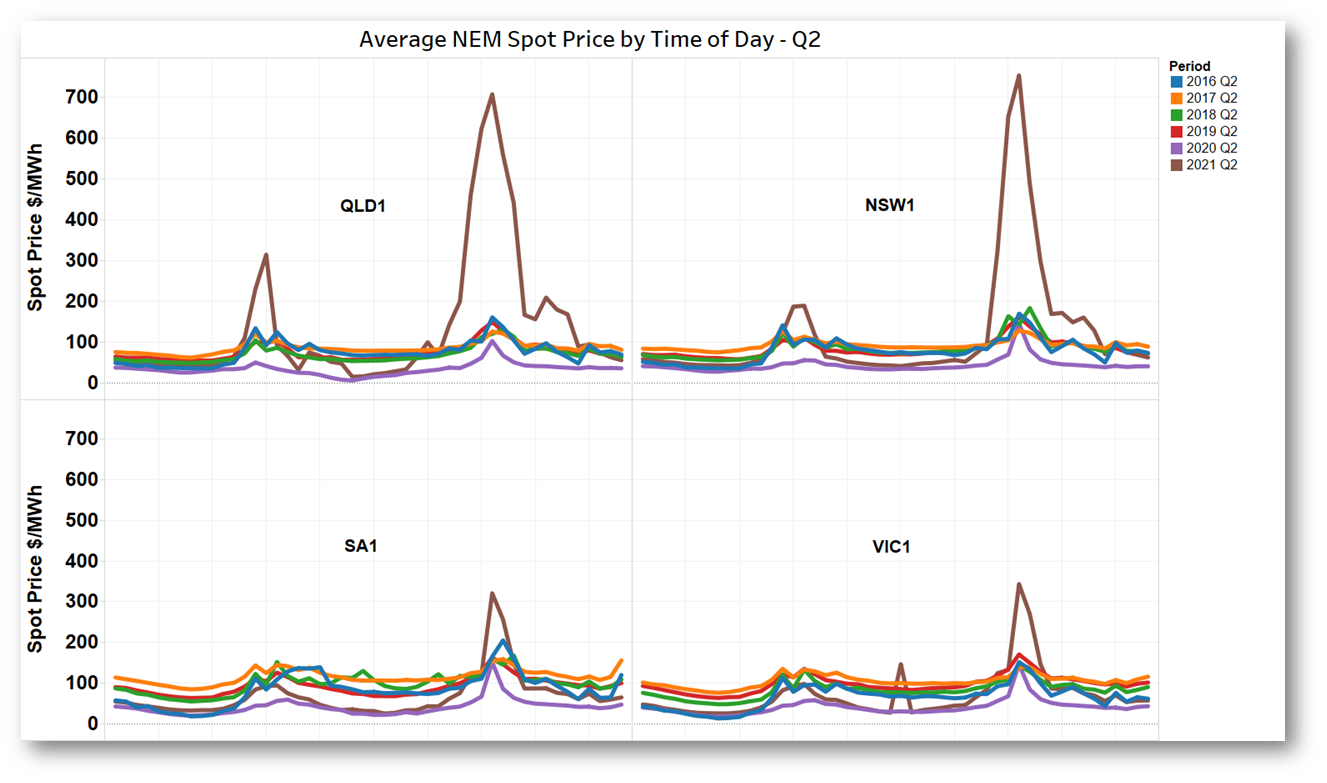 This generally shows that daytime prices remain supressed by the NEM’s growing levels of rooftop and utility-scale PV generation. In a later post I’ll look in more detail at some of the peak period volatility events and the bidding behaviour underlying them.

Back to the Future?

To put all this in overall perspective, here’s a long-term chart of the rolling annualised spot price, demand-weighted across all NEM regions. Overlaid on the chart is a gas price index constructed by averaging regional spot gas market prices for the mainland hubs, again on a twelve month rolling basis: 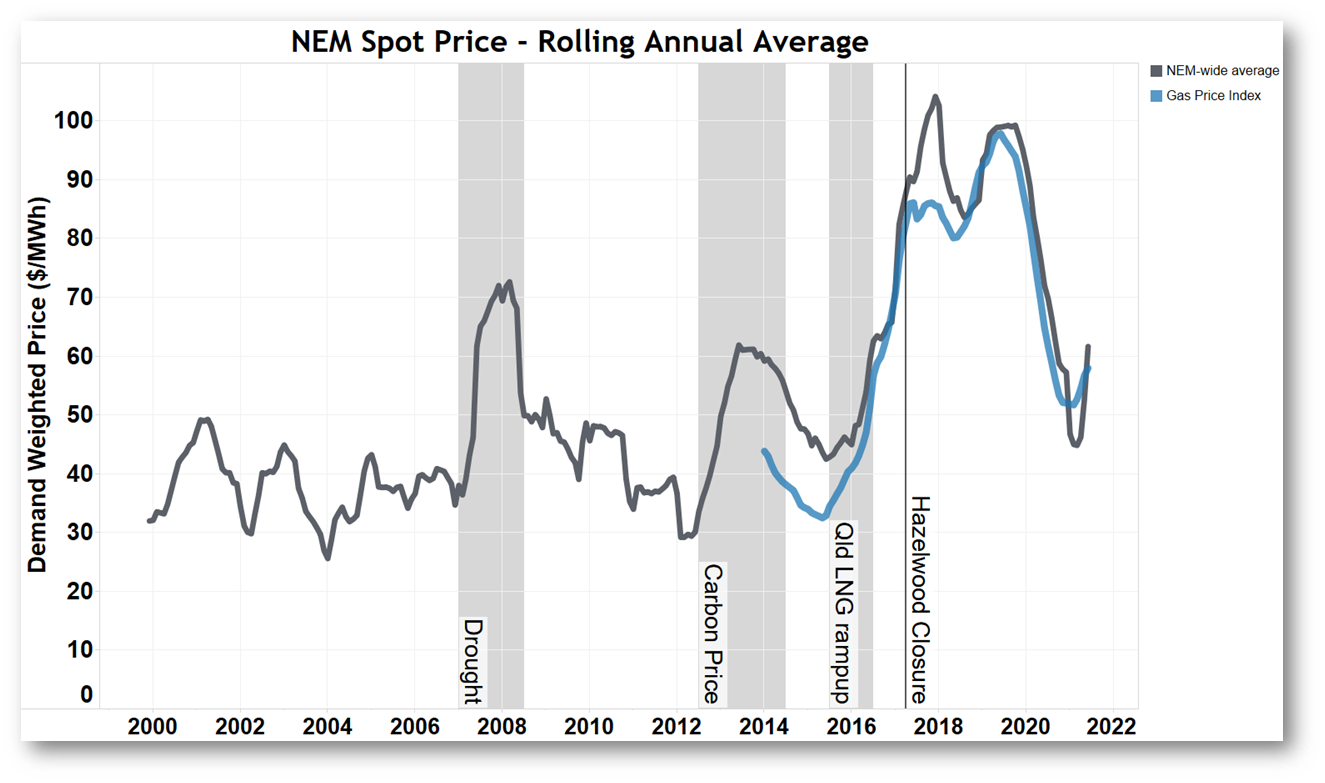 The lift in annual average NEM spot price is obviously limited because we’ve had only one recent quarter of elevated spot prices. Key questions motivated by this chart are whether a) the upturn in Q2 could be the beginning of a trend similar to that seen in 2016, and b) rising gas prices might be pulling up electricity prices, or does the relationship work the other way?

Superficially at least, conditions now are quite different to those five years ago, when Northern power station in South Australia and Hazelwood in Victoria were on the brink of closure, and the upstream gas sector in Eastern Australia was pivoting towards LNG exports which put enormous pressure on domestic gas availability and pricing. With gas being an important “swing” fuel in the NEM, where the spot price is set by marginal suppliers, the relatively sudden shocks of reduced generation capacity and much more expensive gas put a rocket under NEM pricing levels. Only from mid-2019 following strong investment in renewable supply (arguably accelerated by those high NEM prices) and moderating gas prices as upstream supply increased and global LNG prices declined, did NEM prices start falling again.

Current disruptions to coal-fired generation in Queensland and Victoria should be temporary, and that combined with continuing commissioning of new renewable generation ought to make gas prices a weaker driver of NEM prices now than in the 2016-2019 period. It’s also possible that some of the recent increase in gas prices is a direct result of increased demand from gas fired generators, coinciding with seasonally higher domestic gas demand. Finally, the time-of-day spot price averages charted above show that prices outside morning / evening peak demand periods remain at levels closer to those seen in 2020 than the elevated levels of 2016-2019.

Back to the Futures

Another perspective on the outlook for spot prices is available from forward markets for electricity derivative contracts, such as futures contracts traded on the ASX. Futures prices are not formal spot price forecasts, but do represent a kind of “market consensus” on the fair value of contracts which are settled against that spot price, and are therefore strongly influenced by the spot price expectations of market participants.

The next chart shows the historical and recent behaviour of traded prices for futures contracts for financial years 2019-20 (FY20), 2020-21 (FY21), and 2021-22 (FY22) (dashed lines), the rolling twelve month average spot price (solid green), and the outturn settlement price for financial years 2019-20 and 2020-21 (ytd) – these last are the solid horizontal lines which necessarily equal the end-of-financial-year rolling spot average: 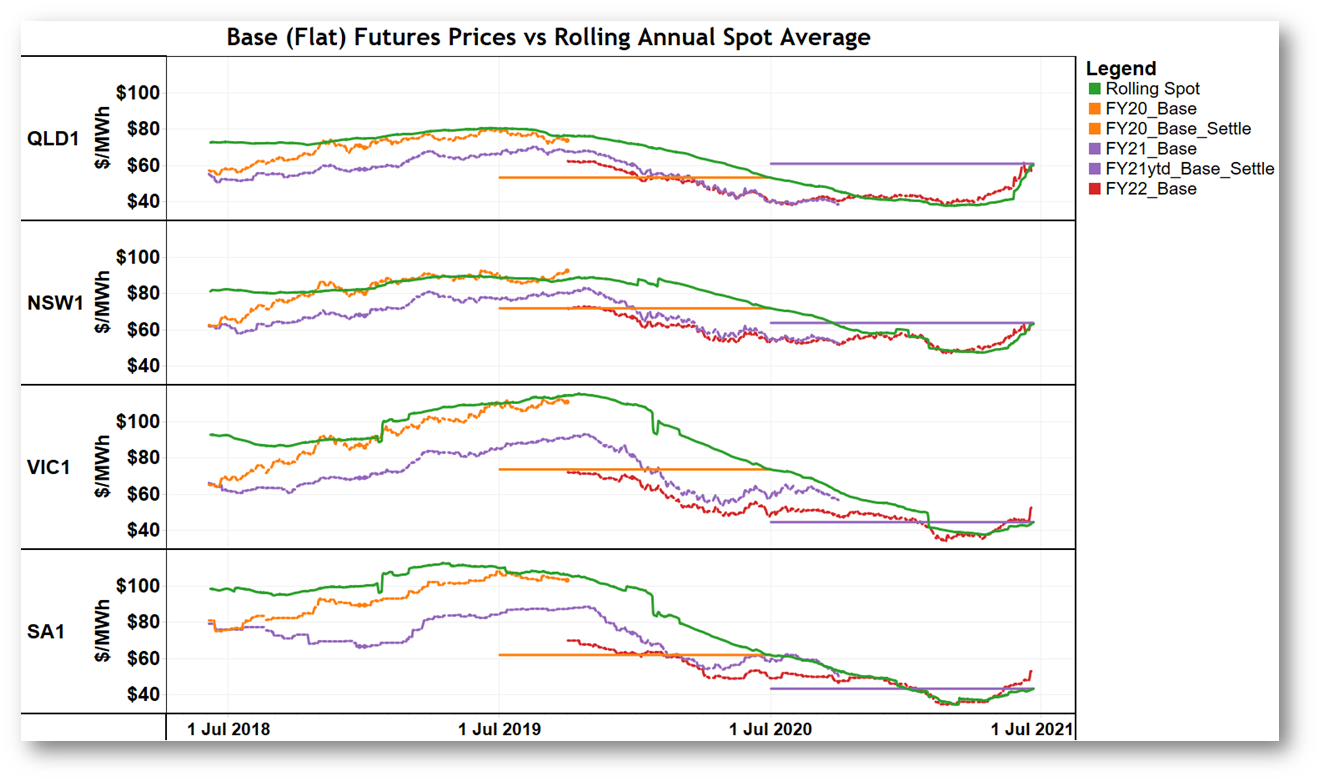 Here’s the equivalent chart for futures cap contracts – settled against the above-$300/MWh volatility component of the spot average: 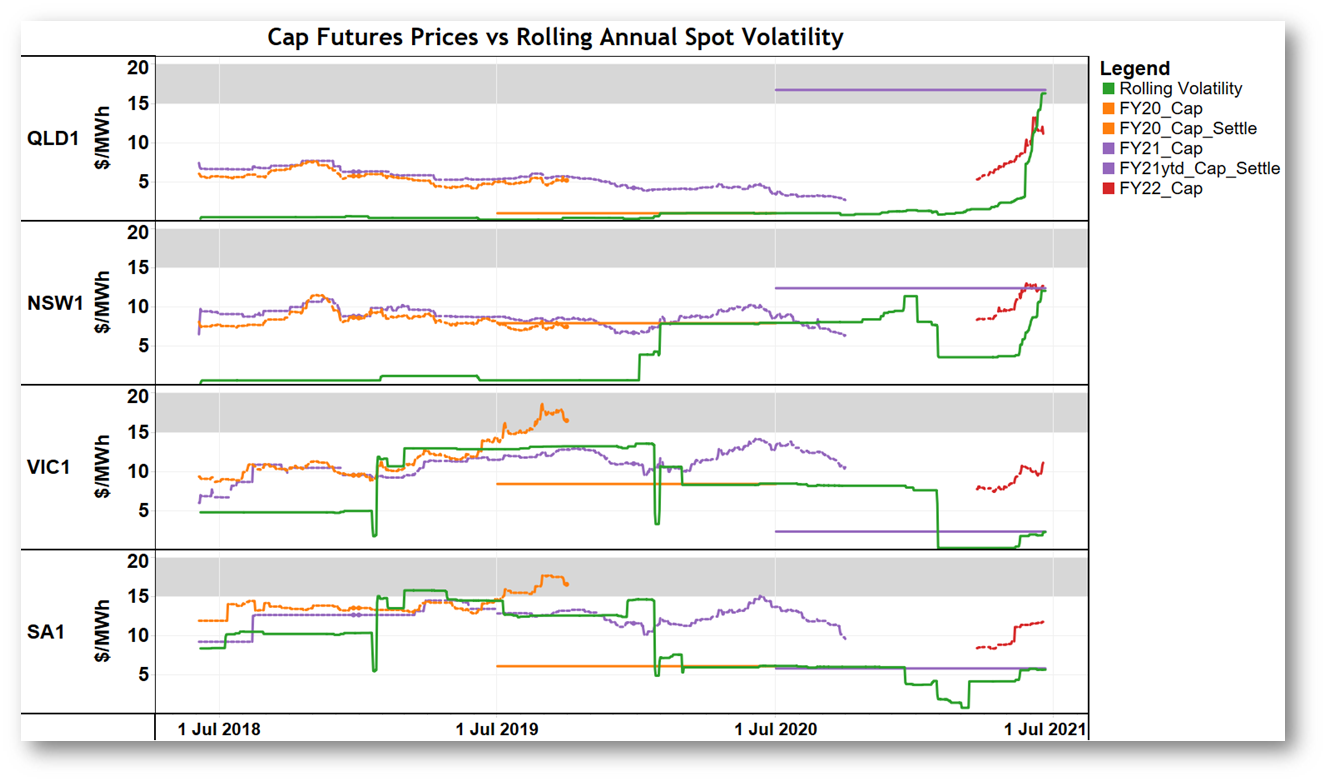 A few important differences from the behaviour observed for base contracts:

More of the Q2 elephant to be served up in a later post.